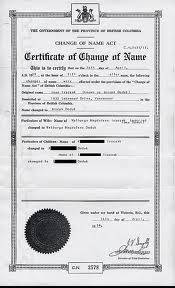 One of the more durable myths of Jewish genealogy is the notion that names were commonly changed at Ellis Island or — the Canadianized version — at Pier 22 in Halifax.

Despite what Great Aunt Minnie once told you, surnames rarely underwent transformation at Ellis Island or Pier 22. Immigration officers at both sites usually worked from written lists of arrivals compiled by ships’ pursers. Perhaps they occasionally smoothed over the orthography of a difficult name, but they otherwise left the Cherkofskys, Horodetskys and Lazerovitches alone.

Canadian officials recorded immigrant names with particular care, knowing that aliens wishing to become citizens were required to apply for naturalization under the exact name used upon landing. At least until 1945 and probably until much later, federal officials routinely checked landing records of naturalization applicants.

In Ontario, people wishing a legal change of name were required to publish their intentions in the Ontario Gazette and elsewhere; submit affidavits listing birth, marriage, mother’s maiden name, immigration and other personal details to the provincial court; then go before a judge to make it legal. While much of this paperwork has regrettably been destroyed, some still exists, for example in the York County Matter Files accessible through the Ontario Archives.

These files preserve background documentation for hundreds of name changes after 1939. Even when the files were destroyed, judges’ order books retain an abridged record of the proceedings. The following name changes are among many recorded in these musty handwritten judicial volumes from the 1940s.

Abramovitz to Abrams; Applebaum to Allen; Barenbaum to Barron; Bernstein to Burns; Bloomin to Brown; Blumenthal to Allan; Birenbaum to Ferguson; Borinsky to Borins; Borisofsky to Barris.

Garfunkel to Garfield; Ginsberg to Gilbert, Gilmore; Grabowsky to Gray; Granofsky to Grant, Gray; Grodtizinsky to Gardner; Greenspon to Green; Greifenstein to Griffin; Grunevsky to Green; Horodisky to Harris; Horwitz to Howard; Jolensky to Jordan.

Kamenski to Cummins; Kapatz to Kay; Katzenberg to Kenton; Katzman to Kay; Kershenbaum to Dalkin; Kestenberg to Keystone, Miller; Kirshenzweig to Kirsh; Koruntoff to Kearns; Kovinsky to Kovin; Kravkosky to Kray; Krawietz to Taylor; Krushilnisky to Krush.

Nikolaevsky to Nicholls; Osheroff to Sheriff; Ostrofsky to Austin; Papernick to Pape; Paskowitz to Pascoe; Persovsky to Pearson; Pokotolowsky to Lofsky; Rabinowitz to Robbin; Rappaport to Rapp; Rosenberg to Roberts; Rotenberg to Raymond; Rotstein to Rolston; Rutmanovitz to Ross.

Salzbert to Sales; Schildkraut to Sheldon; Schnitlick to Saunders; Schwartzentruber to Brent; Shapiro to Sharpe; Shendalman to Jackson; Shimpolsky to Simpson; Shlislelheim to Shelson; Shniffer to Smither; Shushan to Shane; Silverman to Andrews; Sishlosky to Chesley; Slobodnick to Slater; Slotkin to Slater; Snitman to Lewis; Spiegelberg to Spiers; Stein to Sten; Sukloff to Sutcliffe.