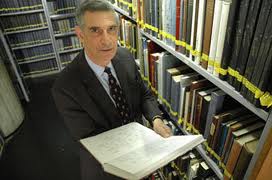 A group of eminent Jewish genealogists recently announced the formation of a new facility, the International Institute of Jewish Genealogy, that will be housed in the Jewish National and University Library of the Hebrew University of Jerusalem.

Although still in an early stage of development, the Institute’s board expects it to become a major force in the world of Jewish genealogy within five years. They envision a foremost international research centre that will work cooperatively with existing facilities like JewishGen, Yad Vashem, the Central Archives for the History of the Jewish People and the New York-based Center for Jewish History.

A fellow of the Truman Institute at Hebrew University, Lamdan is an Oxford-trained historian, seasoned genealogist and career diplomat who retired last year as Israel’s ambassador to the Vatican. Many in the genealogical world readily embraced his idea for the Institute, he said, and staff at the National Library were also highly receptive. “They were happy to welcome us, because they know they have collections of Jewish historical documents that really should be looked at again through the prism of Jewish genealogy.”

Although there are now some 45 university departments of Jewish studies across North America, few if any have ever offered a course on Jewish genealogy, Lamdan noted, adding that the International Institute might eventually produce graduates holding BA or MA degrees in Jewish genealogy. “We’re hoping to open our doors for the academic year 2005-2006,” he said.

It would also patriate certain Jewish collections to Israel if the opportunity arose. “Our purpose is to try and take an overview and tell genealogists where all the collections are. If we can also unearth collections that so far have not been found, so much the better. We’d be very happy if the Institute could bring them in. Being situated in a library, we’d have a place to store them.”

Institute researchers could clarify common misconceptions about historic Jewish life. For example, not all Pale of Settlement Jews were part of organized Jewish communities in cities or shtetls: at least half lived intensely Jewish lives in villages with no rabbis, synagogues, yeshivas, mikvahs or kosher meat, for which they were dependent upon neighbouring towns. “This is just one of a whole series of things that could be researched at a very serious level,” Lamdan said.

Institute researchers would hope to build on some of the fine work accomplished by JewishGen and other organizations, Lamdan said. “JewishGen has done a fantastic job, but they’re not a research institute and they don’t operate at an academic level,” he said. “We hope we would complement their work. I haven’t got enough praise for JewishGen, but we will hopefully be working in a completely different area.” ♦