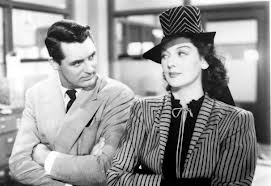 The phrase “gallows humour” has a particular resonance in regard to Ben Hecht and Charles MacArthur’s famous 1928 play The Front Page, which is punctuated by the recurrent testing of a gallows in a courtyard of the Chicago courthouse in which death row prisoner Earl Williams is due to be hanged for murdering a policeman.

The Shaw Festival’s current adaptation of His Girl Friday gave me an excuse to revisit the 1931 movie The Front Page as well as the more famous and definitive 1940 movie His Girl Friday, in which the lead character, ace reporter Hildy Johnson, was a woman instead a man.

In the play, the male Hildy Johnson is determined to quit the newspaper racket to get married but his boss, Walter Burns, wants him to stay at least long enough to cover the hanging. The action begins as Hildy bids farewell to his buddies in the courthouse press room as his fiance and her mother wait outside in a taxi.

Suddenly shots explode and alarm bells ring: Earl Williams has escaped from his cell in the courthouse. (As one of the great gags of the script, the convicted man had been asked to re-enact the crime with an inadvertently loaded gun.) The reporters rush out after the story, leaving Hildy alone. A moment later, the escaped prisoner clambers into the window, giving him the scoop of his life.

The play’s richly dark humour and cynical portrayal of newspapermen and politicians made it a great hit. The 1931 movie, starring Pat O’Brien as Hildy and Adolphe Menjou as Walter Burns, seemed to define the late-1920s American newsroom as a manic place where soulless reporters happily bartered their own mothers, or at least their mother-in-laws, for a sensational story.

In His Girl Friday, director Howard Hawks had the brilliant idea of transforming Hildy into a woman, turning the story into a screwball romance. Now Hildy (Rosalind Russell) is newly divorced from newspaper editor Walter Burns (Cary Grant) and about to marry a hapless insurance salesman (Ralph Bellamy).

(Director Billy Wilder remade The Front Page in 1974 according to the original formula of two male leads — Jack Lemmon and Walter Matthau — working in Chicago in the late 1920s. The result, however, was lacklustre. “I’m against remakes in general,” he later remarked, “because if a picture is good, you shouldn’t remake it, and if it’s lousy, why remake it? . . . It was not one of my pictures I was particularly proud of.”) 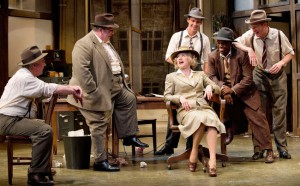 The Shaw Festival’s His Girl Friday is an adaptation by playwright John Guare that combines aspects of the play with the 1931 and 1940 films, and keeps Hildy as a woman. But it doesn’t respect the period: the action is set in 1939 and needless references to Hitler and the war in Europe. More added baggage comes in the form of a shapely woman who crosses the set at key moments, stopping the action and transforming the newsmen into howling wolves.It’s an old vaudeville routine that doesn’t belong here.

The cast, led by Nicole Underhay and Benedict Campbell, is superb in the delivery of the trademark rapid-fire dialogue. However, the production, directed by Jim Mezon, keeps up a frenetic pace for more than two and a half hours with little relief. As in a Marx Brothers film, screwball comedy should be counterbalanced with at least one realistic person or situation.

Hecht and MacArthur depicted a world in which politicians and reporters couldn’t care less about social justice. The mayor is just as corrupt and scheming as newspaper editor Walter Burns. The mayor has painted Earl Williams as a crazed political radical because he is seeking re-election on a law-and-order platform, but Williams actually shot the policeman by accident and in self-defence. He should not have been sentenced to death.

The reporters write stories filled with sensational lies just to sell newspapers. Found to be hiding Williams in a roll-top desk, Hildy and Walter are arrested for obstructing justice, but they beat the rap because they know the mayor had tried to stifle the governor’s last-minute reprieve of Williams.

In the 1940 movie, Hildy always manages to score the hardest-to-get interviews which she spins effortlessly into beautifully written stories. She interviews Williams in his jail cell, then tells his story sympathetically and truthfully to the world, thus demonstrating a soulful compassion that sets her apart from the rest of the wolf-pack. But Hildy’s essential redeeming features are lost in Guare’s adaptation.

Other plays in the Shaw Festival’s current season include Ragtime, Present Laughter, A Man and Some Women, The Millionairess, Hedda Gabler, Trouble in Tahiti, Misalliance, French Without Tears, Come Back, Little Sheba, and Helen’s Necklace. For more information please visit shawfest.com ♦