From the Canadian Jewish News, October 2013 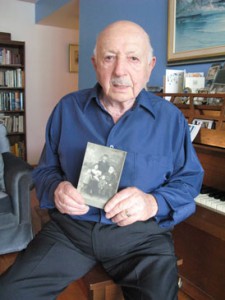 Some 70 years after he last saw his father, mother, brothers and sisters alive, a survivor of the Warsaw Ghetto and Bergen Belsen concentration camp was recently given a photograph of his family for the first time.

“When I received this photo, I said, ‘This is better than winning the biggest lottery in the world,’” said 88-year-old David Zyk, who recently traveled from his home in Melbourne, Australia to Toronto to meet the cousins who had kept the photograph over the years.

Born in Lowicz, Poland in 1925, Zyk was 16 years old when the Nazis forced him and his family into the Warsaw Ghetto in 1941. The youngest of five children, he was the only one of his family to survive.

After the war Zyk, believing he had few relatives left anywhere in the world, moved to Australia where he worked in a factory that made gas stoves. But he remembered his family used to receive packages before the war from an aunt and uncle in Toronto. He knew only that his uncle’s name had been Fishl Phillips and that his aunt’s maiden name had been Gerszt. 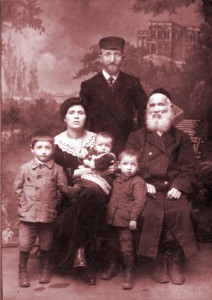 Recently a distant relative of Zyk’s, Ner Bresler of Brooklyn, made contact with him and hired Toronto-area genealogist Bill Gladstone to track down descendants of the Phillips family.

Gladstone used cemetery records, tombstone inscriptions, newspaper obituaries, and other sources to find Phillips family members in both Toronto and Buffalo. And yes, the family had a photograph of unknown relatives from Lowicz. The formal portrait, which was taken about 1922, shows Zyk’s parents in their finest Sabbath clothes, along with his grandfather and three eldest siblings.

About a dozen members of the Phillips family, including Ronni and Bernie Garshowitz of Toronto and Ferne and Gordon Mittleman of Buffalo, met with Zyk and Bresler during their recent visit to Toronto. ♦