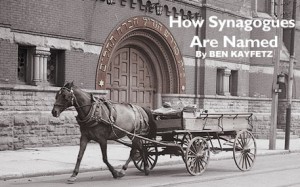 Have you ever wondered about the meaning of those mysterious looking clusters of Hebrew letters inscribed over the doorways of Toronto’s synagogues? Only rarely is an English translation provided side by side, for like so many names, they have acquired a personality and identity of their own to those who are on a basis of day-to-day familiarity with them, quite apart from their literal meaning. These names are an interesting study, a study which tells us something about the inspirations, the root sources, and the spiritual aspirations of those immigrants, mainly from Eastern Europe, who have established these houses of worship in the last 60 or 70 years.

The synagogue names fall naturally into various categories. There is first the most numerous category, the “ethnic” grouping, those synagogues founded by members who hailed from the same small town in Poland, Lithuania, or the Ukraine, and who felt more comfortable worshipping together with men who pronounced Hebrew in the very same dialect they knew back home and who sang the familiar hymns in the cadence they knew as boys. Some are named after whole countries, like the Adath Israel Anshei Roumania on Bathurst Street at College Street (the flock of Israel of the Men of Roumania) established 52 years ago. Today this synagogue is no longer a “Roumanian” congregation in any strict sense. Its rabbi is German-born and holds an M.A. from the University of Toronto. A few blocks away, on Augusta Avenue, is another “Roumanian” synagogue in a renovated private dwelling, called the “Roumanian Congregation of Israel’s Glory” and popularly known as the “Moldavian Shool,” taking this name from the senior province of Roumania (shool being the Yiddish word for synagogue). 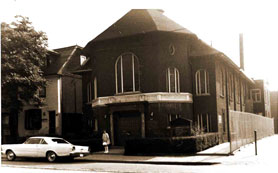 On the east side of Spadina Avenue, housed in a made-over church building, is the Men of England Congregation — known popularly as the “Londoner Shool.” Despite its name, the Men of England is not the synagogue attended by most British-born Jews in Toronto. Its original membership consisted mainly of Russian and Polish Jews who lived in the British Isles for some years before making their permanent home in Canada. In the case of some, their English sojourn was very little more than a three-week quarantine period in transit in London or Liverpool. However, the glow of English residence did not wear off and has remained with them to this day if only vicariously.

In the Beverley-Dundas-Spadina section there are clustered a concentration of these “Men of” congregations: Men of Shidlow, Men of Stashov, Men of Chmelnik, Men of Apt, Men of Ostrovtze, Men of Keltz. Most of these towns are located in Central Poland within about a 100 mile radius of Warsaw, and before the great Nazi annihilation were flourishing centres of traditional Jewish life and culture. The synagogue of Kielce, incidentally, is called in full: The Congregation of the Men of Keltz — Visitors of the Sick; the founders sought to incorporate in their name an old-established Jewish virtue as well as their place of origin.

Others scattered through Wards Four and Five South are called the Men of Slipia, Men of Narayev, Men of Driltz, the Men of Kiev. A tiny tabernacle on Euclid Avenue, which used to house an Italian Protestant sect, is called by the pretentious name of the “Holy Fellowship of the Company of the Community of Israel of the Men of Lagov.”

On lower Huron Street, south of Dundas, is an obscure little house, the home of a 45-year-old congregation which, contrary to the general rule, takes its name not from a village in Eastern Europe, but from America’s greatest metropolis. It is called “Men of New York,” its metropolitan name in striking contrast to its modest size. This name dates back to old pre-quota days more than 30 years when American immigration laws permitted a totally unrestricted movement for all comers between the United States and other countries. In the same Spadina Avenue area is the Men of Minsk Congregation known popularly as the “St. Andrews Synagogue.” How does a synagogue founded by Jews who stem from a White Russian provincial city come by this patronymic of a Scottish saint? Because it is located on St. Andrews Street and no one apparently sees any incongruity in calling it thus. 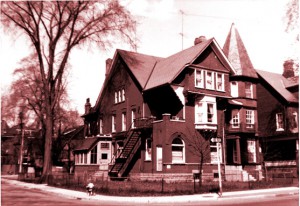 Sometimes the name “Men of” doesn’t have the connotation of geographical origin. The “Palmerston Avenue Synagogue” is know officially as the Anshei S’fard — which is “Men of Spain.” Not one of the members, however, can definitely trace his origin to the classical Hispanic Jewish Golden Age of Toledo, Seville, or Cordova. In this case it means merely that the prayer book used in this congregation is patterned after the Spanish ritual. This divergence was initiated in Eastern Europe by the rebellious sect of the Chassidim purely as a means of distinguishing their services from the conventional standardized worship prevalent in Eastern Europe. The “Men of Lubavitch” on Denison Avenue, south of Dundas Street, refers not to natives of the town mentioned, but to adherents of the great rabbi of that own who flourished from 1747 to 1812.

A second favoured form of naming synagogues is the prefatory “House of.” Eglinton Avenue’s Beth Sholom (House of Peace) and Dovercourt Road’s Bais Yehuda (House of Judah) are examples. (Bais is a variant pronunciation of Beth.) The House of Jacob on Henry Street is another (though this is more commonly known as the “Polish synagogue”). The Beth Tzedec — House of Righteousness — now nearing completion on Bathurst Street above St. Clair Avenue is a “composite” construction. Its name is a combination of the two congregations which merged about three years ago — the 72-year-old Goel Tzedec (The Righteous Redeemer) and the 68-year-old Beth Hamidrash Hagadol Chevra T’hillim (The Great House of Prayer of the Fellowship of the Psalms) on McCaul Street. Taking the key word from both names, the new name was coined.

Chevra — “fellowship” or “company” is a favourite nomenclature. Besides the “Fellowship of the Psalms” on McCaul Street we find on Cecil Street in an unassuming building a congregation called the Chevra Sha’ss — the Fellowship of the Six Books. (So humble and unassuming was this congregation that it only recently hung out a sign, the members deeming a public placard as not in keeping with their state of piety.) The word Sha’ss is made of the initials of the Hebrew words Shisha S’farim — Six Books. This then is a congregation named for (and which studies regularly) the Six Books of the Mishnah — the nucleus of the Talmud, compendium of Jewish law and lore. Half a block to the west is the Fellowship of Readers. On Markham Street (above College) is the Holy Fellowship of Brotherly Love. 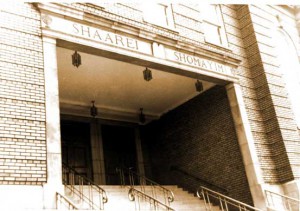 A fourth style of naming is the prefix “Gates of.” Thus on Markham and Ulster, the Gates of Righteousness (Shaarei Tzedek); on St. Clair Avenue, the Gates of Heaven (Shaarei Shomayim) — Toronto’s largest and most modern Orthodox synagogue; and now under erection in the North York part of Bathurst Street, the Gates of Prayer (Shaarei T’fillah).

In Toronto Junction, a remnant of the days when this was a separate municipality with its autonomous Jewish community, there still stands on Maria Street, the “Assembly of Israel” (Knesseth Israel). In 1948 this was the name chosen for the Parliament of the new State of Israel. At the east side of mid-Toronto, in the old Cabbagetown are on Berkeley Street (also a remnant of an earlier more populous Jewish settlement in the district) is the appropriately named “Eastern Children of Israel” congregation.

Other congregations spotted around the city show a wide variety in their names. On Shaw Street is the straight Biblical “Children of Israel”; on Brunswick Avenue and Sussex Street the 68-year-old “Guardians of the Sabbath” founded on Chestnut Street as far back as 1888; a small congregation on Brunswick calls itself the “Voice of Jacob — Men of Truth”; another “The Complete Believers of Israel.” Another “Learning and Labor” (Torah V’Avodah) — Americanized wags have called it T.V.A. from its initial letters; a synagogue on College Street which is combined with a rabbinical seminary (Yeshiva) is called “The Yeshiva of the Living Law.” A similar house of learning on D’Arcy Street is called the “Tree of Life.”

The list is by means exhausted. Nor is the reservoir of traditional names of congregations. If any kind of trend is discernible it is the tendency away from the “Men of” terminology. ♦