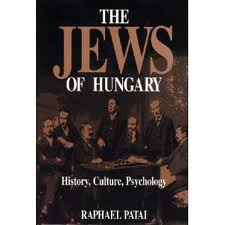 The Jews of Hungary: History, Culture, Psychology (Wayne State University Press) by Raphael Patai is a monumental 720-page treatise that traces the history of the Jews of the Carpathian basin from their origin in Roman times to their near-obliteration in 1944 and beyond, right up to the present moment.

Patai, who died recently at 86, was a distinguished anthropologist-historian who has written a shelf of works on Judaic subjects. This book must certainly stand as one of his finest. He explained that he wrote it to compensate for the relative neglect of the subject by many Jewish historians, including Graetz, Dubnow and Baron.

From the earliest moment forward, Patai’s confident hand paints both the big and small pictures, so that we feel the grand sweep of history with all of its irrepressible momentum, even as we are introduced to an intriguing cavalcade of characters who inhabit this rich, promising, but ultimately tragic story.

Thus, we meet the Mendels, an hereditary succession of seven Jewish prefects who served as liaison between medieval kahal and king. Likewise, we meet Jewish physicians, criminals and other types to 1800, and thereafter a veritable Who’s Who of Hungarian-Jewish writers, editors, journalists, artists, scholars, physicians, lawyers, industrialists, merchants and financiers.

When the Turks conquered much of what was then Hungary in 1526, the Jews were evidently spared the wrath of the Muslim scimitar. Although thousands were removed as captives to Turkey, more than 100 Jewish families were permitted to remain in Buda. After the Turks were repelled in 1686, Hungary joined the Austro-Hungarian dynasty and tens of thousands of Jews from the neighboring territories of Moravia, Bohemia and Austria repopulated the Hungarian countryside.

The Habsburg monarchs were deeply ambivalent toward the Jews. In 1746, Maria Theresa signed an order of expulsion against the Jews of Buda and imposed an annual toleration tax upon every Jewish head in the empire. Later in her 40-year reign (1740-80) she enacted protective measures as well. Her son Joseph II, who reigned from 1780 to 1790, ushered in an era of reform and emancipation, and in 1788 ordered Jews to adopt Germanic family names. Roughly a century later, many Jews ‘Magyarized’ their names to reflect their sense of inclusion in Hungarian society.

Although the revolution of 1848 brought with it manifestations of anti-semitism, the Jews participated wholeheartedly in the popular uprising. Especially after their legal emancipation in 1867, they participated fully in academic life, medicine, the arts, the economy and the trades. Within the multi-ethnic Austro-Hungarian Empire, the Jews were a valuable ally to the Hungarian Magyars in their quest to become a majority in their own country.

Not even Theodore Herzl, born in Pest in 1860, could persuade any sizeable proportion of Hungarian Jewry to surrender their deeply-rooted sense of Hungarian nationalism for psychological membership in the dream-state of Israel. As Patai chronicles, they considered themselves full-fledged and patriotic “Magyars of the Mosaic faith.”

The period from 1867 to 1914 was a golden era for Hungarian Jewry, whose members yearned for social equality as never before, even in their admissibility to the Uri (gentlemanly) class of Hungarian society. Jews, especially those with money, became barons and counts and fought duels; many converted to Christianity. For the Jews, this was a time of intellectual fermentation, upward mobility and increasing migration from village to city.

The golden era ended with WWI, when Hungary lost two-thirds of its territory and the Jews lost their strategic importance as a group tipping the balance in favor of a Magyar majority. Reduced to despondency and bitterness, the country began looking for scapegoats. The denouement was swift.

Numerus Clausus, the first racial law, came in 1920; others followed beginning in 1938. Late in the Nazi era, in 1944, nearly two-thirds of Hungary’s 775,000 Jews were deported and killed. It was because Hungary’s Jews clung stubbornly to their nationalistic patriotism, Patai explains, that so many were ultimately caught in the Nazi’s baleful trap. ♦