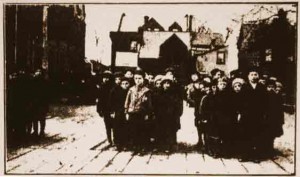 There is no bilingual system in McCaul School, Toronto.

Of the 682 children in the school 550 are Hebrews, and they are learning to talk and write English.

A remarkable instance of how quickly they pick up and make use of the Anglo-Saxon language is seen in the case of Reuben Lieberman, 15 years of age, who came to Canada with his parents on June 10 last unable to speak a word of English, and five months later wrote an examination in history, receiving a credit of one hundred marks. The examiners endorsed the paper as “excellent.”

At School Only Two Months

Reuben has the olive complexion, dark hair and dark eyes of his race, and in a handsome boy, of frank, winning ways, with a dash of humor playing on his face. He stated yesterday to a Globe representative that after landing in Toronto he was educated privately by another Jewish boy, Samuel Ross, an old McCaul schoolboy.

Mr. Ross came to Toronto three years ago, and has since matriculated in the university, paying for his education by working on the staff of one of the Toronto dailies. Mr. Ross brought Reuben to Mr. G. K. Powell, principal of McCaul School, and begged him to do for his friend what he had done for him. That was in September last, so that Reuben has been at McCaul School only for two months. He lives at 154 Duke Street, and is fired with the ambition to follow in the footsteps of his friend and mentor and enter the university. 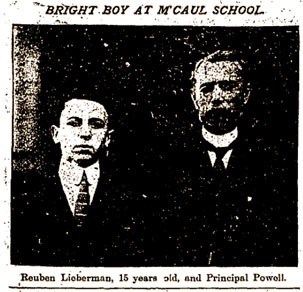 At six rows of separate desks in McCaul School sat some sixty or seventy tiny “greenies,” as the children call the fresh arrivals, who do not speak English. Bright and happy they look, two little Chinamen and two English boys being the only “foreigners” in this class of Hebrew immigrants. Their teacher, Miss Clark, it is clearly to be seen, loves her children and her profession, and her influence is reflected in the sunny faces of her pupils. Here is to be seen one of the melting-pots into which is poured the races of the earth.

Miss Clark has been eight years in the school, and has just come back after a trip through the United Kingdom. She finds her knowledge of German a help, as Yiddish is a corruption of the German language.

The Jewish children, in addition to a knowledge of the language of the country from which they come, speak Yiddish and Hebrew. Every Jewish boy of thirteen must be able to read the Jewish Old Testament in Hebrew. The Yiddish language, although a corrupt German, is printed and written by the Jew in Hebrew instead of German characters, and from right to left. They acquire proficiency in these languages — the Yiddish for use in conversation, and the Hebrew for use in the synagogue — at private night schools and their own homes, the Rabbis in some cases acting as teachers.

“One of the big problems that confront Canada is the nationalization of the thousands of foreign immigrants annually pouring into the country,” remarked Principal Powell. “The future of the nation is bound up with the public school. The school is the fountain of national life, the mould in which the individuality of the Canada of days to come is receiving the impress of its dominant characteristics.” ♦

See also How teachers tame school-children in the Ward