Recently Jim “Yascha” Blugerman, who is nearly 90 years of age, was installed as the 58th president of Toronto Lodge, the oldest and largest B’nai Brith chapter in Canada.

Yascha had only five rubles in his pocket when he came to Toronto in 1908. He also owned a broken mandolin and a certain joyous chutzpah. He used to jump on and off the open-ended Toronto streetcars so fast that he was always beyond the reach of the conductors after him for the fare.

One of five brothers and two sisters, he was born in 1887 into a poor, Orthodox Jewish family on a small communal farm near Kerson, Ukraine. In 1900 the family moved to Odessa, where Blugerman’s mother, but not his father, was caught in the spirit of unrest then throbbing among the students, professionals, workers and the middle class.

One day, she told Yascha, the socialists would lead the workers out of the wilderness just like Moses. He recalled the earth-shattering Sunday when the czar’s officials shot indiscriminately into a crowd of discontented workers, killing hundreds and precipitating the Russian Revolution of 1905. As rumours of a dreaded pogrom arose, many students at Blugerman’s school acquired small weapons in secret.

Then the Cossacks and the Black Hundreds, rode into town, perpetuating a massacre of Jews and protestors alike. Guns were distributed and Blugerman was handed one — a Smith Wesson revolver — for the first time in his life. Seeing some of the hated Black Hundred on the streets, he fired two shots and two men dropped to the ground.

Yascha fled for the relative safety of his family’s apartment above his father’s shoemaker’s shop. His mother quickly disposed of the gun and decided that Yascha had to leave. He hid out with an uncle in Kerson. In 1908, an uncle in Toronto mailed the family two steamship tickets on the Baltic-American line. Yascha and a brother traveled without a passport through Poland, Germany and Belgium where they boarded the old rusty ship filled with refugees. 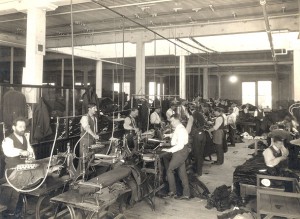 In Toronto Yascha became known as Jimmy. He went to night school and found a job in an Eaton’s factory as an underpresser, earning a dollar a day for six nine-hours days each week, minus a half-hour lunch break each day. Impressed by the Toronto women’s cloakmakers strike against Eaton’s in 1912, Blugerman joined the United Garment Workers of America and devoted himself to union causes. He became chairman of the Toronto local.

At a national convention in Nashville, Tennessee in 1914, Blugerman joined a group of 40 delegates who broke away from the UGW to form an independent union that became the Amalgamated Clothing Workers of America (ACWA). It would become one of the most powerful unions in the garment industry. (See S. M. Shapiro’s book, “The Rise of the Toronto Jewish Community,” for more details.)

Dedicating himself as a full-time organizer for the ACWA, Blugerman withstood all kinds of weather to deliver his messages surreptitiously to workers leaving their factories at closing time, always being careful to avoid the wrathful eyes of the bosses. Tip Top Tailors was his first big success and others were to follow: he and other organizers soon converted large Toronto factories such as Shiffer-Hillman, Crown Tailoring, W. R. Johnson, Stone Clothing and Randall Johnson as well as several Montreal factories to the progressive idea of collective bargaining rights for their workers.

Blugerman joined the Socialist Party of Canada in 1912 and joined the Communist Party of Canada in 1922. He was also a founding member of Workmen’s Circle branch 220 and, in 1927, the United Jewish People’s Order, a communist mutual benefit society. Disillusioned in the Stalinist era, Blugerman openly repudiated Stalin and was expelled from the Communist Party.

Active in the American Hebrew Immigrant Aid Society in Toronto after the First World War, Blugerman organized rallies against Hitlerian fascism in the 1930s and stood on boxes at open-air meetings on Spadina Avenue.

All this and more was Jimmy Blugerman, and he has earned his place in the history of Toronto Jewry. ♦