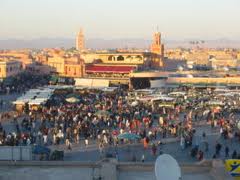 In 1786 the Italian Jewish scholar Samuel Romanelli (1757 1817) boarded a ship at Gibraltar expecting it to carry him eventually to his home in Mantua. The vessel stopped at several Moroccan ports, however, and Romanelli went ashore and innocently became entangled in some legal trouble.

Consequently his passport was confiscated and, to his immense chagrin, his intended brief visit to the Magreb became an enforced stay of four years.

A Torah scholar and proponent of the Jewish Enlightenment, Romanelli was proficient in ten languages. The author of numerous poems, plays and essays, he was apparently the first Hebrew writer to mention Shakespeare and Milton; he also admired the English poet Pope. His most popular work was “Massa B’Arav” (“Travail In An Arab Land”), an engaging account of his Moroccan sojourn that is filled with Biblical references and rich descriptions of Jewish life in a remote land.

I began reading Romanelli’s travelogue several months ago on an Air Marac flight to Casablanca and continued it on the connecting flight to Marrakech. For several days, I toured the gardens and souks of Marrakech by day and read Romanelli by night. Then I encountered someone in that dusty city by the High Atlas Mountains whose experiences seemed to parallel those of
Romanelli in an uncanny way.

One evening in a rooftop cafe overlooking the Djema El Fna, the exotic marketplace that pulsates with jugglers, snake charmers, fortune tellers and throngs of American tourists, I met an Israeli journalist who was in town to cover an international medical congress, organized by an Israeli doctor, on maternal mortality. He told me a sour story of how the Moroccans hadn’t
allowed an El Al jet to land as promised and hadn’t permitted the Israeli flag to be flown, although all other national flags were allowed. As one journalist to another, he urge me to contact the doctor to obtain the full details.

The next afternoon I called Dr. Daniel Weinstein at his hotel and caught him in a state of great agitation. The conference was over; everyone except he and his wife had gone home earlier that day.

“They’ve taken my passport I’m a prisoner here against my will!” he exclaimed. “It’s outrageous what they’ve done! And for no reason! There are faxes on my account going this minute between David Levy and Netanyahu. It’s going to the Israeli cabinet tomorrow. Your timing is perfect you must come and see me!”

Naturally I was struck by the parallels between Dr. Weinstein’s and Romanelli’s experiences. Of course I didn’t mention this when I met the Israeli that evening: After all, it had taken Romanelli four years to escape, with nothing but the clothes he wore. Did Dr. Weinstein know of any reason why he was being detained? Yes. Apparently the conference centre was demanding payment “but they’re the ones holding the money, not me.” At his hotel three hours before his scheduled flight home, the front desk staff had politely asked to photocopy his passport, then turned it over to the police.

Dr. Weinstein was obliged to stay in Morocco an additional nine days until the conference centre “found” the missing funds and his passport was returned. Back in Jerusalem, where he is head of obstetrics at Hadassah Hospital, he is still attempting to pay off the conference’s debts even as he contemplates organizing a second gathering. Maternal mortality claims six million women annually during childbirth, he says, and is a particular scourge of the Third World.

History repeats itself, they say; the more things change, the more they stay the same. “Travail In An Arab Land” would make a good title for Dr. Weinstein’s unfortunate experiences in a colorful North African country that usually puts on a much friendlier face for foreigners. ♦