Toronto’s All-Night Eating Houses, A Study of Those Who Dine While Most Others Are in Bed Sleeping

First Customers Are The “Half-Soused” Individuals, Who Come In To Get Sobered Up Before Going Home — They Have Enormous Appetites.

Spending The Night In The Shelter of The Kindly Restaurant. 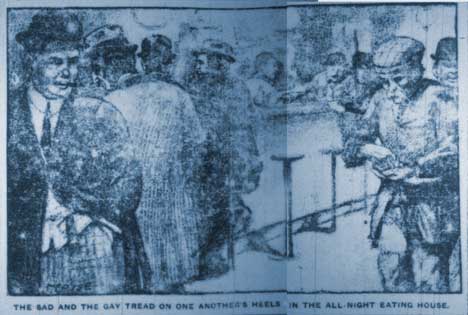 “You probably get plenty of this kind of customers,” I remarked a few nights ago the manager of one of Toronto’s all-night eating-houses. Two men who had obviously looked on the wine when it was red, or rather, in all probability, on the whiskey when it was rye, had just lurched into the restaurant, and with a dexterity probably born of long practice, but which, considering their condition, appeared to me little less than marvelous, had succeeded in perching themselves on stools of that singularly unstable kind peculiar to restaurants and offices.

In hussy tones they demanded soup, and, being supplied therewith, at first appeared astounded at discovering that it was hot, and then proceeded to spill the greater portion of it on their clothes as they attempted to convey it to their mouths.

They then, aided by the drunkard’s appetite, proceeded to demolish eggs and bacon, two slices of pie each, finishing up with an ice cream apiece. Then they reeled out, presumably bound for the homes which they, no doubt, make miserable.

“Oh, yes,” replied the manager to my query. “Just about this time” — it was nearing the witching hour of midnight — “we get a whole lot of these guys coming in half-soused.” I thought the use of the qualifying word “half,” showed him to be a man of broad and charitable mind — “as they like to come in to sober up before going on home.”

And, as though to prove the correctness of his diagnosis, in strolled four other “guys” in the same condition., unmelodiously chanting, “Has anybody here seen Kelly?” I left the eating house without staying to discover whether they received any satisfactory response to their unmusical query.

At the next restaurant which I visited about one o’clock, I found things rather quiet — the “half-soused” brigade had apparently all departed — but I noticed particularly one elderly man of respectable but needy appearance who lingered long and lovingly over a piece of pie and cup of coffee which he had ordered. He ate the pie literally crumb by crumb, and drank the coffee in the smallest sips, and with the longest intervals between each one that I have ever seen. He was a man of quite sixty years of age — an Englishman — and scrupulously neat in attire, although his clothes were threadbare. He was, in short, one who was unmistakably “up against it,” and “up against it” at that time of life when a man can least bear to find himself in that position.

And now a very odd thing happened. For, on calling at another of the “always open” restaurants, the first person whom I espied was the self-same man, eating another piece of pie and this time without the accompaniment of coffee. For a moment the thought flashed through my mind that here was another journalist on a tour of discovery, and one, moreover, unlike myself, got up to look the part of an habitue of these places of entertainment.

But only for a moment did I entertain the idea. The man was poor, miserably poor, despite his neat exterior — he was gaunt and sallow and his cheeks were sunken — he was poor, not with the semi-genial poverty that is sometimes behind with its rent, but with the dire poverty that is the accompaniment of hunger and want. After a time I engaged him in conversation and, by dint of what I considered diplomacy and what he probably thought impertinence, I managed to extract from him a goodly portion of his life story. Into that I need not enter. Suffice it to say that he was at the moment absolutely at his last gasp, financially.

“I had nothing to eat all day,” he explained to me, “and I had only fifteen cents in the world, and had to choose between expending it on a bed or on food. I chose to spend it on food, and am making out the time at these two restaurants until daybreak. I hope to get a job then.”

Well, hope springs eternal in the human breast, and let us trust he was not disappointed. However, being doubtful as to how long he would be permitted to remain on the premises on the strength of an expenditure of five cents, I handed him the wherewithal to pay for a bed and breakfast. Ah, me! the flotsam and jetsam of a large city! The nomads that one meets, the men and women of whom one wonders how and almost — were it not akin to blasphemy — why they exist, the poor ships that pass in the night, and oh! what frail craft some of them are. Toronto has fewer of them than any city of its size of which I have knowledge, but it is pathetic to know of even one.

When my elderly friend had left to secure a lodging, a party, composed of men of very different type entered. They were well dressed, and as far removed from the members of the “half-soused” coterie as from the needy specimen of humanity of whom I have spoken. Indeed, I wondered what they would be doing in such a place and at such an hour. However, I was speedily enlightened by their conversation.

They were devotees of the great god Chance — in other words, they had been playing poker. And from what I could gather for no small stakes either. They partook of soup and ordered devilled kidneys — for which, as these were unobtainable, they substituted lamb chops — and, while waiting, they called up four taxicabs which called for them on the conclusion of their meal, after they had duly made an appointment for the next night.

“Yes,” said the man behind the counter, “those four men come in here most mornings about the same time” — it was 3 a.m. — “and they have always been playing cards. Queer sort of life, isn’t it?”

I suppose he meant the life led by the far gamblers, but I accepted his observation as applicable to his life in general, and heartily agreed. It is a queer life and a queer world, too, which takes all sorts of people to make up!

By this time I had consumed as much coffee, club sandwiches, and other things s I had any immediate use for, but, thinking it as well to “go the whole hog” — and in a very literal sense — I resolved to visit one more of these eating-houses with the ever-open door. And here I struck four journalists engaged on all-night work, with one of whom I happened to be acquainted. He gazed at me with surprise, and as I thought suspicion, which I did my utmost to downplay [?. . .] and explained that my reason for being abroad at such an hour was that I was acting in a professional capacity and, in fact, studying, for the benefit of The Star Weekly, some of the types to be met with in Toronto’s all-night eating-houses. He accepted my excuse — I had almost said my apology — with a somewhat frigid air, and I knew that I had not convinced him. However, if these lines should meet his eye, I trust — I profoundly trust — that he will consider I have, in part, made my word good.

After my brother-journalist had taken his departure — his good-bye due, no doubt, to a misconception on his part, was as cold as the dawning day — some workmen on their way to work came in for breakfast and I felt that the new day had begun. Thus does one day run into another. One man leaves the “always open” for bed, as another enters for breakfast. One man enters because he must sober up, another because he is as hungry as a wolf. The sad and the gay press on one another’s heels in the all-night eating-house as they do in life. I have, of course, touched on but a few of the types I saw on my round that night, and I have spoken of them because they are typical. Of other isolated cases I see no need, and of some I have not the heart, to speak. — A.R.F. ♦