One of numerous vanished racetracks in Toronto history was the Hillcrest Racetrack, which attracted throngs of horse-racing enthusiasts to a spot near the intersection of Davenport and Bathurst almost exactly a century ago.

Hillcrest Racetrack opened in August 1912. Despite its name, it was located not on the crest or top of the Davenport hill but rather on the plain below the hill near the south-eastern corner of Davenport and Bathurst. After a few years the racetrack closed and the land was taken over by the Toronto Transit Commission.

Here are some illustrations of the Hillcrest Racetrack on the day it opened, from the Toronto Telegram (above) and Toronto Star (below). ♦ 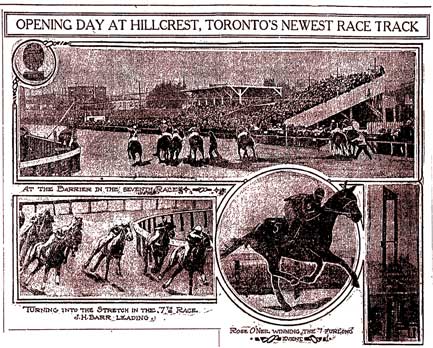