The death of Rabbi David Graubart of Chicago in 1984 prompted J. B. Salsberg to write a poignant two-part reminiscence in the Canadian Jewish News of May 10 and 17, 1984.

The Graubart dynasty was world-famous and centred in Toronto between the two world wars, Salsberg recalled. After the death of the legendary Rabbi Yehuda Leib Graubart, the dynasty shifted to Chicago where two of Yehuda Leib’s sons, David and Philip (Pinches), both rabbis, played significant roles in the religious community.

When Rabbi Yehuda Leib Graubart and family came to Toronto in 1920, they settled into a house on Cecil Street where Salsberg’s own family had lived years before, the author recalled. R. Graubart became the spiritual leader of the city’s Polish Jewish community.

When Salsberg increased his involvement with Poalei Zion (Labour Zionism) and lessened his attendance at the Talmud Torah, his “saintly father” was deeply hurt and spoke to Rabbi Graubart about his disappointment. “He must have poured his heart out to his friend and rabbi, Y. L. Graubart, for I soon received an invitation from the rabbi to pay him a visit.”

Graubart tried to persuade the young Salsberg that following his new interests in Yiddish literature and Jewish history should not necessarily mean he had to drop his former path of study. As example, Graubart pointed out a novel of Sholem Asch, sitting on a table, that he happened to be reading at the time. 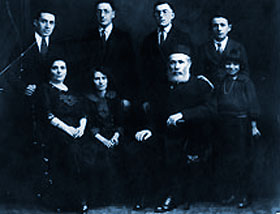 Several years later, Salsberg was appointed general secretary of the Poale Zion Youth of North America. On a trip to New York, Rabbi Graubart’s son, Pinches phoned him and suggested a get together. The two met in the offices of Poale Zion on East Broadway.

Pinchas confessed to J. B. that he was in the midst of a deep spiritual crisis and was thinking of leaving the yeshiva, perhaps for a year, perhaps more. J.B. advised him to act cautiously and to discuss the matter with his learned father. Ultimately Pinches returned to Toronto for a year, studying privately with his father, then returned to the yeshiva a year later “and nobly upheld the Graubart rabbinic tradition in Chicago until his untimely death in that city.”

When Salsberg’s father died in 1949, Rabbi David Graubart memorialized him in an article in the city’s Yiddish journal. Rabbi David also wrote in the New York Yiddish Forverts about his father’s efforts to quell the trend towards shops remaining open on Shabbas in Toronto’s Kensington Market. Salsberg recalled that he wanted to correspond with David on this point, since his own father had come home from one such demonstration with a blackened eye after a storekeeper had hurled an apple at him.
The senior Rabbi Graubart was known as “der Stashover Rav” (the rabbi of Stashover), and he retained that honorific throughout his long residence in Toronto. It was Reb Itche Meyer Korolnek, a pious Stashover Jew living in Toronto, who had led the enthusiastic campaign to bring Graubart here. The erudite Nachman Shemen, himself a rabbi with great learning, always proclaimed himself to be a “pupil” of the Stashover Rav.

An extremely meaningful period of the Stashover Rav’s life unfolded during the era of the First World War. To prevent leaders of any of its minority groups from collaborating with the Germans, the Czar’s agents took many of them as prisoners in St. Petersburg and Moscow. Rabbi Y. L. Graubart was one such hostage. But he was befriended by the chief rabbi of Moscow and became involved in all aspects of Jewish life during the last days of Czarist rule and the early period of the Bolsheviks. ♦