In this brief item, which appeared in the Toronto Star of October 28, 1910, a woman is brought into police court in connection with an episode in which she came to the defense of a Jewish mother and daughter who were being “stoned” on Victoria Street. Such incidents were certainly not unique in the Toronto of a century ago. In this instance, the case was brought before Judge Jacob Cohen, Toronto’s first Jewish magistrate.

Hebrew Women Are Stoned — Girl Who Dared to Resent It is Hauled to Court.

“I’m a Canadian, and I regret the day I’ve lived to see a woman stoned. Positively stoned. It’s a case of Jew and Gentile. The Jews dare not live on Victoria Street.”

Miss Caldwell of Victoria street made a rather dramatic outburst in the afternoon Police Court in her defence of a seventeen-year-old Hebrew girl, Annie Gibble, of 320 Victoria street, charged with assaulting Mrs. Katie Filton of 218.

The girl’s mother was the woman who, it was claimed, was stoned, and as evidence of the fact she brought along as an exhibition a peach basket filled with old cans and bottles, all of which she declared had been cast at her by small tormenting children of that neighborhood, the chastisement of whom had led to the trouble between the girl and Mrs. Filton.

Miss Caldwell shed a few tears with the thought of the treatment her Hebrew neighbor had been subjected to, and the girl herself was sobbing quietly.

With this evidence Magistrate Cohen considered just one half-minute.

Here are three more stories on the same unfortunate theme; from 1905, 1914 and 1919 respectively, showing that such ugly incidents, perpetrated by an ignorant minority, were by no means rare. 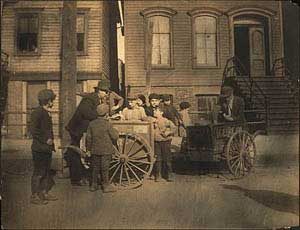 A miniature anti-Jewish riot occurred at the corner of Queen and McCaul street about half-past eight last night.

About that time of night Queen street is crowded with people promenading with no particular destination. As a good proportion of them are boys, that accounted for the noisy crowd which quickly gathered.

A Jewish rag and scrap merchant had left his push cart, loaded with scrap, at the side of the road while he went to talk to a fellow Hebrew. When he returned, the cart and its contents were gone.

In great perturbation, and with many exclamations, he ran about the street hunting for it, and soon gathered a big crowd of boys around him, casting rude gibes, and poking fun at him generally in a way that neither relieved his anxiety nor soothed his ruffled feelings.

The crowd around him had gathered to fair proportions, when some one volunteered the information that his cart was in a lane off McCaul street.

He found his cart all right, but it was empty, and the crowd which was following him had grown so large that he was more frightened than angry. Insulting remarks were shouted after him by the crowd, and his friend, who had joined him, made matters worse by teling the crowd in a violent sort of way, to mind its own business.

It began to look as if the Jew would have an exciting time when a policeman came along. It took three of them to disperse the crowd, however, and let the unfortunate peddler go his way unmolested. — Toronto Star, May 11, 1905.

Constable Williams Hurried to Scene and Gathered in Some Culprits

A gang of young rowdies, living on Widmer street, gave Constable Williams of Court Street Police Station considerable trouble last night by frightening a family of Jews who occupy a house on the corner of Adelaide and Widmer streets.

After the family had retired for the night, the gang, none of whom are over fourteen years of age, stoned the house, breaking many of the windows. Thinking that a riot had broken out, Constable Williams started toward the scene of the trouble.

At the sight of the constable, the gang ceased shelling the house and fled down Widmer street. Three of them escaped, but two were caught on Front street hiding under a box car. They were taken to Court Street Police Station and charged with malicious injury to property. ♦ — Toronto Globe, September 1, 1914

Then Mob Run Along Dundas West and Close Up Stores

Finally Stretch Cable Across Queen and Yonge and Delay Traffic 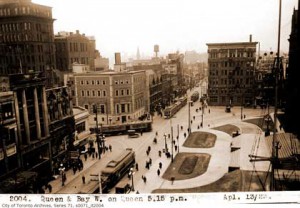 Determined that his waggon from which he peddled should not provide material for a Peace Day bonfire, a Jewish huckster residing in the rear of 15 Edward street from a point of vantage on the roof of his stable stood off a mob of young men on Saturday night until they drove him away with several scalp wounds by a shower of bricks.

The peddler suffered a similar loss during the celebration of the armistice.

Such was the outstanding attempt of a mob to turn the celebration into a riot. It failed because they could not gather sufficient forces from the homecoming holiday crowds on Saturday night as they came out of the Ward to raid restaurants. 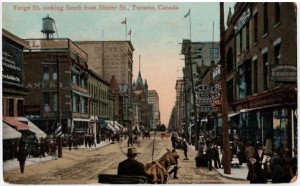 The peddler was sitting in front of his dwelling when the crowd rushed up and made for his stable. Expostulating, he tried to drive them off.

It (the crowd) was after his waggon to drag into Yonge street for a bon fire. He did not surrender his property without a fight. Up to the roof he went, and showered bricks and other missiles upon the gathering. The mob replied and forced him to beat a retreat.

When he had gone his horse was turned loose from the stable, the waggon was dragged forth and his stable set on fire. A fire alarm was rung by excited neighbors.

The crowd became quite dense and street car traffic was held up. One car was well filled with passengers, and several women became hysterical when some of the mob, to add to the excitement, started a small fire near a street car.

The fire was finally extinguished, and the mob started on through the Ward. 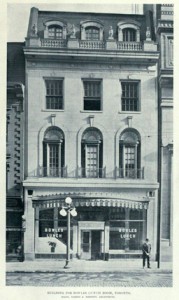 The Jewish storekeepers, whose places of business are invariably their homes, were summarily ordered to shut up. Dundas street west within a short time was lifeless, while excited foreigners, with the August riots of last year fresh in their memories, paced up and down the street.

Bowles’ restaurant at Queen street was next to receive a visit. It was nothing more than a visit, for the mob, entering by the Bay street door, raced through the place upsetting food, and out to Queen street.

McConkey’s restaurant received a similar call. From Bowles’ lunch a telephone message was sent to the provost marshal on Richmond street asking for some assistance. It could not be given since there were no men in uniform in the mob.

A Childs’ restaurant two men in uniform demanded admission. They had behind them about a score of youths and were met by three stalwart policemen and two husky members of the military police. The restaurant was closed. 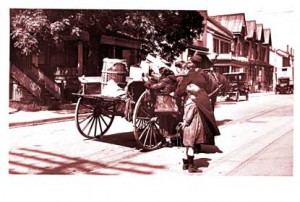 “We waltzed the leader over to our office on Richmond street,” said the sergeant of the military police, “and upon questioning him found that he had had a dispute with the manager over wages. He was a foreigner who had served in the C.E.F., and seemed to have some of his fellow countrymen with him. The mob quickly dispersed when he was gone.

These military policemen were determined that in any attempt made to damage property that they would arrest the ring-leaders of the crowd in spite of any odds. The military police were returned men with the Mons ribbon.

Hustle Men Out of Restaurant

Constable James Jarvis of Court street station put to rout a mob of eighty who had entered Bowles’ Yonge street restaurant before it could be closed. With his baton he hurried them up one aisle of chairs and down the other into the street. 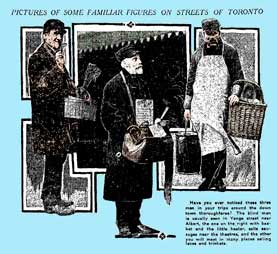 “Drop that canteloupe,” he said to the last youth, who snatched a lunch from the chair of a patron. The youth hastily dropped the dainty dish, and the ice cream slid along the floor.

With the restaurants closed, the gathering then congregated about the corner of Queen and Yonge streets, where they delayed the traffic by drawing a huge cable across the street and allowing street cars and motor vehicles to pass though at their will, while civilians and returned soldiers, weary from their part in peace celebrations elsewhere, grumbled and complained. The mob tugged the cable until it was tired and then broke up.

Many hucksters and peddlers will find their waggons missing this morning when they go to their stables. Bonfires were built on many corners chiefly with what could be stolen from stables close by. ♦ — Toronto Globe, July 21, 1919.