◊ In the fall of 1910, the Toronto newspapers described certain bureaucratic difficulties that had been discovered in the naturalization applications of hundreds of would-be citizens because an assistant of Justice of the Peace Jacob Cohen had been signing the forms for Cohen instead of Cohen signing his own name himself. Cohen apparently had no knowledge that the practice had been taking place, and the naturalization certificates that were thus processed were deemed to be invalid. A list of several hundred naturalization candidates appears below — and may prove valuable to genealogists seeking to ascertain whether a father, grandfather or great-grandfather was present in Toronto at that time.

Just how long this wholesale irregularity has been going on it is impossible to say, but it seems safe to assume that there are a goodly number of foreigners in Toronto who enjoy the full privileges of citizenship, including the right to vote, who really have no right to them. Mr. Cohen is likely to come in for some criticism for allowing the free use of his name attached to these applications, and for the consequent mix-up that will result next election day. Naturally all these voters will have been carefully looked after by the two parties, and as their names will now have to be stricken off the voters’ lists, considerable trouble will doubtless ensue.

It appears that a man named Dworkin, who has a news stand at 64 Elizabeth street, was particularly active in getting together groups of foreigners anxious for naturalization, and it was through his efforts that the longer list of names was compiled and submitted to the Clerk of the Peace. Since then Dworkin has had nothing to do with the work. For naturalization he charged the foreigners either $1.25 or $1, of which turned over 25 cents to the Clerk of the Peace, the regular fee, and the balance he divided with Murray [Jacob Cohen’s confidential clerk]. Lately a lawyer on Chestnut street has been doing most of the naturalization work.

When asked by The Star this morning what he had to say with regard to the irregularities in the applications Mr. Cohen claimed that his name was used entirely without his knowledge.

“When I found out what Murray had done I was very angry,” he said. “I told him never to do a thing like that again, and also instructed him to bring me the applications to which he had signed my name. He did so, and I signed them properly. Of course they had been made at different times, and I signed them all at once.”

. . . “I did not see any harm in signing Mr. Cohen’s name,” said Mr. Murray. “I am his secretary, and I thought it would be all right. Mr. Cohen was very busy just then, and he told me to go ahead and attend to the matter. Mr. Dworkin and I met the men, and I swore them although I suppose I had no legal right to do so. There was no drumming of them up: they all wanted to become naturalized. The only money that we got out of it was from the charges Mr. Dworkin made and he stopped having anything more to do with it some time ago. The only applications I signed were those for the May and September sessions so the irregularity will not go any further back than that.”

. . . Below is a list of names submitted for the September Sessions when the irregularity was discovered. ♦ 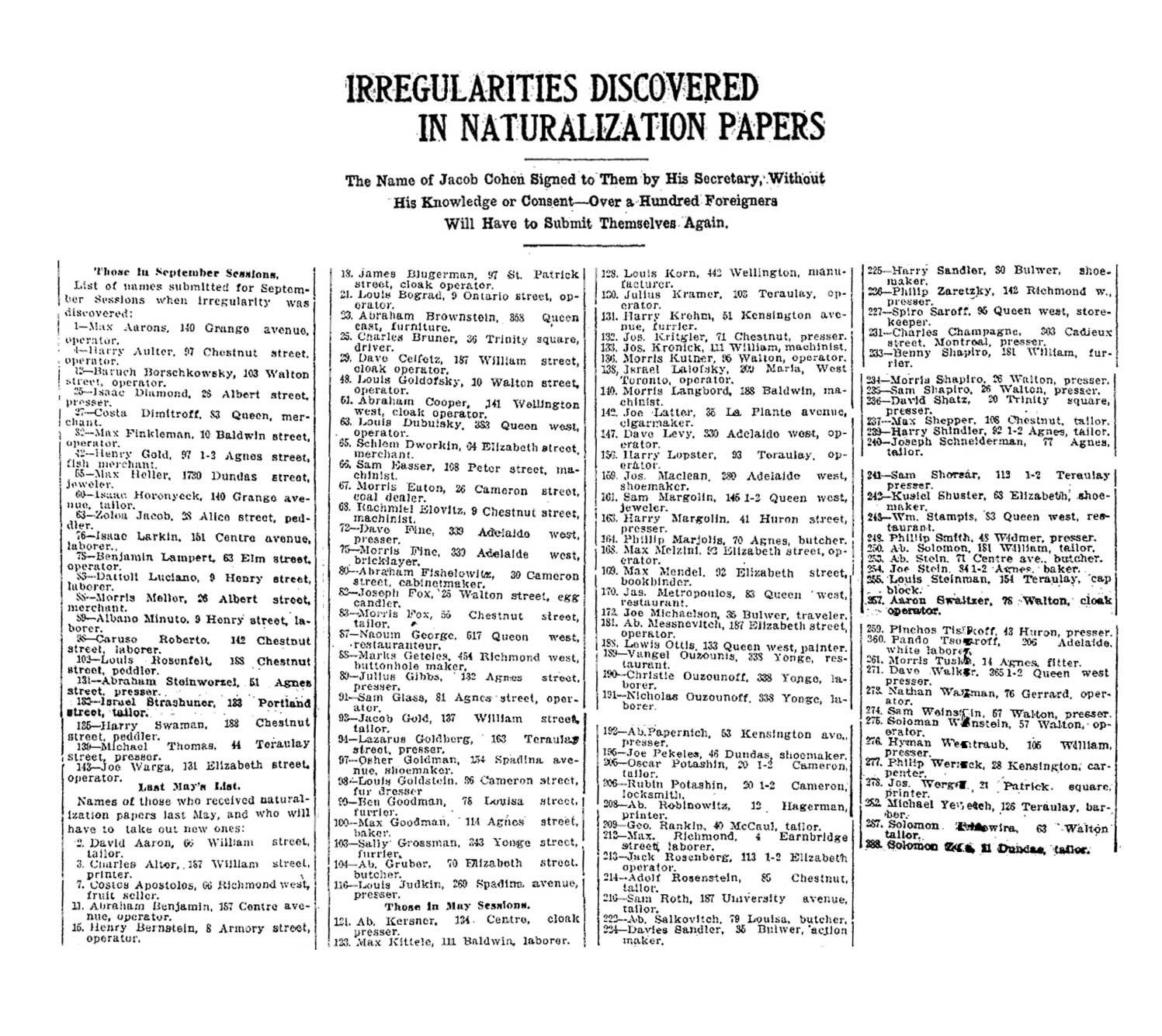