The Force Quartered in St. Andrew’s Market Have Poor Quarters, and the Cells are Dark, Dangerous, and Unsanitary

One cannot be a policeman in a day. It is only after a most thorough coaching and training that a man can don the blue uniform with the silver buttons and proceed to tell strangers where Queen’s Park and the City Hall are situated.

This training often occupies as long as nine weeks. Some men adapt themselves to the requirements much more readily than others, and in consequence their terms of probation are shortened to a space of three weeks.

When a squad of men are entering the force, they are taken in hand by an officer who thoroughly understands manual drill. They parade, go through various evolutions, and attain that erect and imposing appearance which distinguishes the Toronto force. They are then lectured as to the duties of a policeman. The Deputy Chief addresses them on the meanings and significance of warrants, summons, and subpoenas. Inspector McClelland, who has at his fingers’ ends the requirements of the cab bylaws, instructs them in the conduct of cab drivers and the values of the cab tariff.

Sent Around the Divisions

In the course of time, a probationer is assigned to a station. He is directed to patrol a beat in company with another policeman. The older man is usually one of long experience and knows every foot of the division. After his return from the beat, the probationer is asked to describe what he has seen, what public buildings, banks, churches, etc., were on the beat. He is then transferred to another division, then to another, until he has a general idea of the whole city and a working knowledge of police duties. He is then given a uniform and detailed for regular duty in a police division.

Station In A Market

No. 3 division is one of the oldest in the city and within its boundaries are still to be found what remains of some of Toronto’s one-time fine residences.

No. 3 Police Station is situated in St. Andrew’s Market, in Esther street. Like many of the other police stations, No. 3 is the result of acquisitions made one by one by the city as the need for room increased. At one time, the present premises were butchers’ stalls. The police station proper was situated in the north-eastern corner of the building. Today it falls short of the requirements of a station in almost every respect. One of its most serious shortcomings is the situation of the cells. They are placed underground and for lack of ventilation, natural light and sanitary conditions rival the dungeons of the old world.

Fire is always an emergency to reckon with, but so far as the safety of the prisoners of No. 3 Police Station are concerned, it has been wholly disregarded. To add to the ungainliness of the approach, the flight of stairs leading down to the cells have a turn in them. A gas jet, ever alight, set high in the aperture of a stone wall, sheds what luminance there is.

In addition to having a veritable fire trap beneath them, the policemen are compelled to wrestle with the problem of getting an intoxicated man either up or down the stairs.

The women’s cells are situated on the ground floor, are easy of access, and are well aired and lighted. They were erected in another age, however, and are not provided with sanitary equipment.

When Toronto was younger and not quite so large as she is today, the police of No. 3 and No. 2 divisions divided between them the honour of governing the most ungovernable districts. Years ago it was quite unsafe for the men of No. 3 to patrol their beats singly. Two policemen were always to be seen together. Today an element in No. 3 seems to have retained the old vindictiveness towards the man in uniform, as three serious assaults have been made upon policemen within a year.

The first beat ever patrolled by Deputy Chief Stark was in No. 3. He entered the ranks as a policeman, won promotion after promotion through merit and hard work, and today stands second in command in Toronto’s 350 policemen.

Once in Queen Street

Originally, No. 3 police station occupied the building now devoted to the John Street Fire Hall. It was moved to St. Andrews’ market over 27 years ago. Its boundaries are John, Beverley, and St. George streets on the east; Bloor street on the north; Clinton street and Bellwoods and Strachan avenues on the west, and the waterfront on the south.

One mounted man is attached to the division. Behind the station is the patrol wagon house, with stabling accommodation for seven horses. While No. 1 Police Station was being overhauled a couple of years ago, the ambulances were stationed in No. 3.

Forty-seven men, two patrol sergeants, two sergeants, and an inspector constitute the strength of No. 3. Owing to resignations, the strength is three below the prescribed number.

Inspector Samuel Dickson has been permanently at the head of the division since March 1 of this year. He is the youngest inspector in the city. He entered the force when 22 years old, and has seen 18 years of continuous service. Inspector Dickson won his spurs when a policeman attached to No. 2 Division.

On Nov. 9, 1899, about 1.30 a.m., he heard a shot fired about 132 Queen street west. The shot ended the life of Varene, the grocer. At the risk of his life, Inspector Dixon [Dickson] apprehended Williams after he (the inspector) had shot and killed McIntosh. Williams lived to be hanged for murder.

Inspector Dickson is an exceptionally efficient and capable officer, and although a busy one, he finds time to be a genial companion to those who transact business with him. He is assisted in his division by Sergeants Mulhall and McCarron, and Patrol Sergeants Umbach and Duncan. ♦

◊ St. Andrew’s Market was located at the northwest corner of Brant Street and Adelaide Street West. It has been designated a historic site; see the plaque, below. For more about St. Andrews Market, please visit http://www.heritagetoronto.org/discover-toronto/map/plaque/st-andrews-market-and-playground 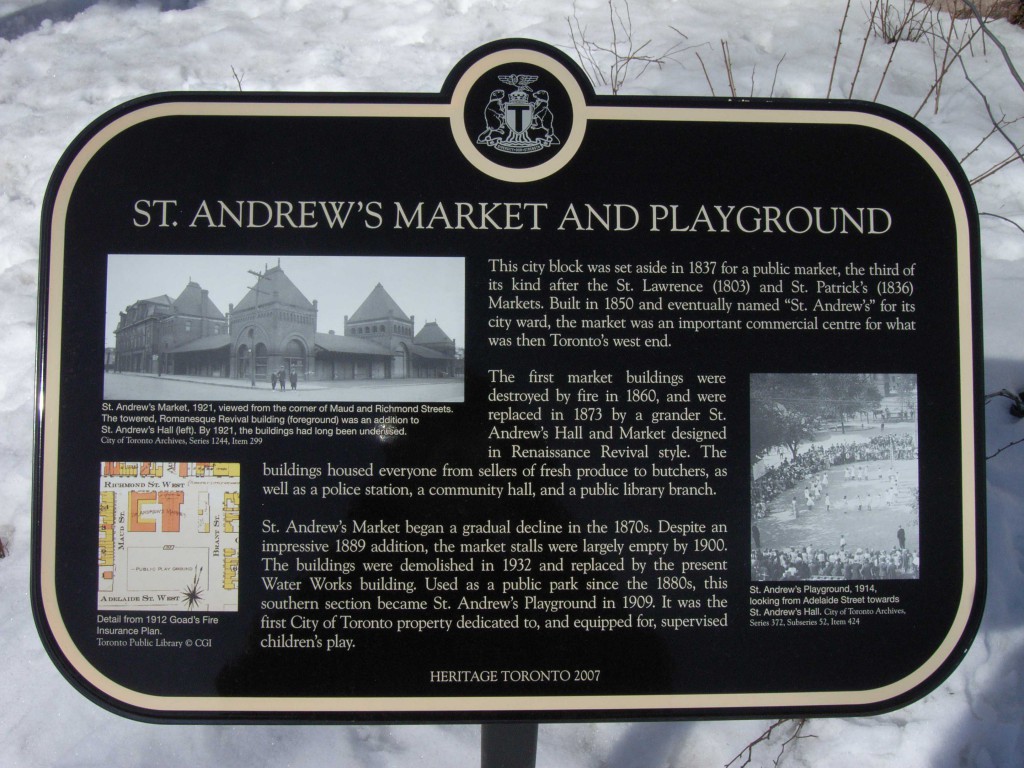