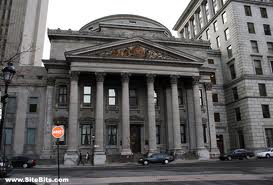 In Place d’Armes, an historic square in Montreal’s Old City, two opposing shrines — a loftily-domed church and a classically-pillared bank — face off against each other, potent symbols of the durable dialectic between religion and commerce that has helped shape this dynamic French-and-English-speaking city founded on an island in the St. Lawrence more than 350 years ago.

With its twin belled towers and magnificent interior, the Notre Dame Basilica (designed 1829) draws more visitors than any site in Montreal. Despite its alluring neo- classical facade and domed roof, the nearby Bank of Montreal (1847) receives far fewer pilgrims. Yet its hallowed halls are also highly illustrative of the city’s colourful and contradictory character.

There is much, besides this well-appointed bank building, that repeat visitors to Montreal can see to enhance their appreciation of Quebec’s largest and most cosmopolitan metropolis. For instance:

* First-timers often visit the elegant urban Mount Royal Park designed by American landscape architect Frederick Law Olmsted. The park’s Chalet Lookout, added as a make- work project during
the Depression, offers a panoramic, reach-out-and-touch view of the McGill campus and the skyscrapers of downtown. Exclusive and historic neighbourhoods on the 750-foot mountain offer alternate panoramas. Winding upwards along the mountain from downtown, Pine Avenue and adjoining streets offer good views of the city and the magnificent residences of the Golden Square Mile. This elevated inner-city neighbourhood is home to many social notables, including former prime ministers Pierre Trudeau and Brian Mulroney. The Westmount Belvedere, reached via The Boulevard and Summit Circle, offers more lofty perspectives of downtown over the rooftops of the wealthy anglo suburb.

* Perhaps you’ve already sampled some of the many cafes and restaurants downtown around Crescent, Bishop and Mountain streets, or in the Old City. Next time, try the Latin Quarter around St.-Denis St. and St.-Louis Square in the French-speaking suburb of Outremont. Between Ste.-Catherine and Duluth streets are a variety of Indian, Italian, French, Japanese and other ethnic eateries, many of which spill onto the sidewalks in summer. Outremont also has a large Hasidic Jewish community and excellent bagel bakeries such as the St-Viateur and Fairmont bakeries (on streets, respectively, of the same names, near Jeanne-Mance).

* You’re familiar with Place Ville Marie (1962), the cross-shaped skyscraper and shopping mall in which religion and commerce are architecturally intertwined. These duelling motifs may also be seen in Le Promenades de la Cathedrale, a shopping concourse beneath Christ Church on Ste-Catherine St. between University and Union. The church, built in the gothic revival style in 1859, was sinking into its foundations, until an engineering miracle was performed in 1987. Workers excavated a 17-metre-deep atrium directly beneath the 8,000-tonne structure while it was supported by a network of pillars and beams, then built the mall around the atrium. Connected to the Underground City, Le Promenades de la Cathedrale is decorated with stylized gothic arches. Another impressive shopping mall in the Underground City is the Montreal Trust Building. Its five levels of shops are housed behind an exterior of rose marble and blue-tinted glass at McGill College Ave. and Ste-Catherine St. 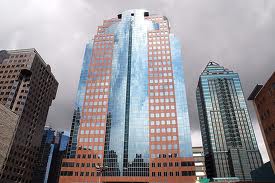 * For more instances of architectural innovation in the urban core that first-time visitors may overlook, visit Le Cours de Mount Royal, on Peel St. between Ste-Catherine and Maisonneuve. Redeveloped in the late 1980s, this graceful building was formerly the grand Mount Royal Hotel, once the largest hotel in the city. Now it features an assortment of shops and restaurants in an exciting mix of old and new architectural styles and interior and exterior spaces. Another recent development that grabs the imagination is the Montreal World Trade Centre, a complex of buildings on McGill St. at St-Jacques, near the stock exchange. Enter via the old Nordheimer Building, a high Victorian confection that is part of the Inter- Continental hotel. The heart of the complex is an enclosed atrium over a former laneway where a part of the Old City’s fortification once stood. Seeing the juxtaposition of old and new facades, Torontonians will find similarities to Toronto’s BCE Place, which is somewhat less grand.

* All visitors to Montreal should visit the Point-A-Calliere Museum of Archaeology and History, which illuminates Montreal’s past on the very ground where the city was founded in 1642. There is no better introduction to the dynamic forces that shaped Montreal than the 16- minute multi-media presentation offered at frequent intervals daily. On display in an archaeological crypt in the basement are artifacts of six centuries of history and many intriguing exhibits. The museum is located along the St. Lawrence River by the Old City and the Old Port.

* Perhaps on a previous visit you visited the Biodome, the vast and vastly impressive environmental museum housing four ecosystems — a tropical rain forest, a Laurentian forest, a St. Lawrence marine mini-habitat and a polar world featuring dozens of penguins. Now you may wish to see the nearby Insectarium, where beetles, locusts, butterflies, ants, cockroaches and other eight-legged wonders are displayed. The Insectarium is located in the Botanical Gardens, not far from the Biodome; a free shuttle-bus runs between the two.

* One of the best views of the city may be had from the Olympic Tower adjacent to the Biodome. From this 626-foot inclined tower, the largest in the world, one may literally study the Montreal skyline, referring to the labelled photographs and diagrams to identify major buildings and bridges. One may even see some of the Laurentians to the north and some of the Monteregian hills to
the south.

* For further information on any of these sites, visit the Infotouriste Office on Dorchester Square in the Dominion Square building, where many brochures and maps are available. When you are finished, step outside and look across the square, the far section of which (across Rene Levesque Blvd.) is known as Place du Canada. This is where some 150,000 people gathered last October for the massive federalist rally.

* Via Rail offers a comfortable alternative to driving. Trains travel frequently between Toronto and Montreal and travel downtown to downtown in as little as four hours. ♦