Mary Antin, born in the Lithuanian (now Belarussian) town of Polotsk in 1881, recorded her memoirs of the Old Country and of coming to America in The Promised Land, a book first published in 1911.

The Promised Land is a valuable first-person account of the myriad concerns and experiences surrounding the journey from the squalid shtetl to the goldene medina — from the poverty-stricken village to the gleaming land of opportunity.

In the early 1890s, when Antin’s family undertook the voyage, the Jews had been expelled from Moscow and had poured into the Pale. “Passover,” Antin writes, “was celebrated in tears that year.” In place of the traditional prayer of “Next year in Jerusalem” came the fervent wish, “Next year in America.”

The entire neighborhood became excited when the family’s steamer tickets arrived, she writes. “(They) wanted to handle the ticket, and mother must read them what is written on it. How much did it cost? Was it all paid for? Were we going to have a foreign passport or did we intend to steal across the border? Were we not all going to have new dresses to travel in? Was it sure that we could get kosher food on the ship?”

The family was besieged with good wishes, suggestions and advice. They were told to see the Lubavitcher Rebbe to get his blessing; to pack plenty of zwieback in case only treif was available aboard ship; to sew their money into the linings of their clothes to avoid being robbed by the police at Castle Garden.

Meanwhile, the 10-year-old Mary stepped through town with a new-found sense of self-importance. “It was delicious … to be stopped and questioned at every shop-door, when I ran out to buy two kopecks’ worth of butter; to be treated with respect by my former playmates …; to be pointed at by my enemies, as I passed them importantly on the street.” 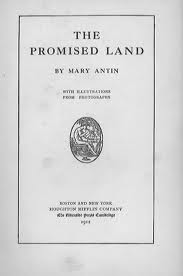 A clutch of friends saw them off at the train station. “The last I saw of Polotsk was an agitated mass of people, waving colored handkerchiefs and other frantic bits of calico, madly gesticulating, falling on each other’s necks, gone wild altogether. Then the station became invisible, and the shining tracks spun out from sky to sky.”

The family visited relatives in Vilna, then continued by train over the German border to Berlin, then Hamburg, where they were confined to a prison-like quarantine barracks for two weeks. Finally they boarded a steamship which crossed an often tormented sea.

Settling into an immigrant section of Boston, the family attempted to integrate themselves into the new land as quickly as possible. “We had to visit the stores and be dressed from head to foot in American clothing; we had to learn the mysteries of the iron stove, the washboard, and the speaking-tube; we had to learn the trade with the fruit peddlar through the window, and not to be afraid of the policeman; and, above all, we had to learn English.”

Her parents set up a tenement store and sold flour, sugar, potatoes, crackers, kerosene, soap, kindling wood and penny candy. Mary’s mother, especially, made rapid progress with English and “soon lost all sense of disadvantage, and conducted herself behind the counter very much as if she were back in her old store in Polotsk.” ♦