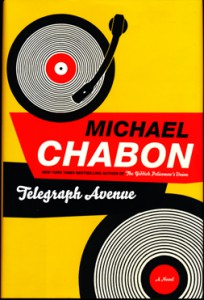 Not surprisingly, American author Michael Chabon originally developed the premise, story and characters for his latest novel, Telegraph Avenue, as the script for a 1999 television pilot that never got off the ground.

Like many of his previous books, including his 2000 Pulitzer-prize-winning novel The Amazing Adventures of Kavalier & Clay, Telegraph Avenue is brimming with references to popular television shows, movies, records, science-fiction classics, comic book heroes and other pop-culture references. (His other books include The Yiddish Policemen’s Union, Gentlemen of the Road, and Manhood for Amateurs.)

It also offers an ambitious ensemble of characters including full portraits of women as well as men, blacks and Jews, gays, old folks, teenagers and babies, and “Blaxploitation” stars of the 1970s. The mix also contains a variety of thugs and criminals as well as people of much higher station such as Gibson Goode, an ex-football quarterback who has become the fourth-richest black man in America, and Barack Obama, who makes a thematically appropriate cameo.

The setting is the racially mixed city of Oakland, California. Archy Stallings, who is black, and Nat Jaffe, who is Jewish, share a passion for vintage jazz and pop music and thus find themselves among that “league of solitary men united in their pursuit of the lost glories of a vanished world.” Archy and Nat are partners in Brokeland Records, a store that its owners realize is “nearly the last of its kind, Ishi, Chingachgook, Martha the passenger pigeon” — and now thoroughly endangered because the tycoon Gibson Goode intends to open a rival megastore in the ‘hood.

Their wives, Gwen Shanks and Aviva Jaffe, are midwives dedicated to the holy task of bringing babies into the world: they too feel their life’s work threatened after a hemorrhaging mother is rushed to hospital. This quartet at the centre of Telegraph Avenue are subject to a dark blend of seismic tensions from racial disharmony to economic displacement to social uprootedness, as if their hearts have become untethered to any solid mooring in the world. As Nat tells his partner, “I don’t know about you, but I feel like, Archy, if I don’t have this place? I’m not sure I really have a place.”

Adding to the angst, several old pigeons come home to roost. Archy’s no-good absentee father, Luther Stallings, a former Blaxploitation film actor of the ‘70s, comes stumbling back holding evidence of a decades-old murder (a glove — shades of O.J. Simpson) for which he hopes to extort enough blackmail money from a local councilor to make a comeback in the movies; only trouble is, Luther himself was an accomplice to the deed. Archy is also confronted with the sudden appearance of a teenaged son whom he has never communicated with or supported, who was born out of wedlock and raised in Texas.

Like most men in Chabon’s fiction, Archy and Nat seem bereft of suitable mentors or father figures, and embrace imaginary heroes from popular culture — TV, movies, comic books, vinyl records and the like. They are at best overgrown boys without a suitable reference manual to show them how to become adult men. (Nat has read plenty of comic books but has no apparent knowledge of Jewish learning.) The women may seem equally unsettled but at least they have a secret source of power, knowledge and authority in their exclusive and mystical ability to bring new life into the world.

The following passage, relating to childbirth, demonstrates Chabon’s superb mastery of language: “There was a ripple of liquid and skin, then with a vaginal sigh, the little girl squirted faceup into Gwen’s wide hands. The small eyes were open, nebular, and dull, but in the instant before she cried out, they ignited, and the child seemed to regard Gwen Shanks. The air was filled with a hot smell between sex and butchery.”

Chapter III consists of a single sentence twelve pages long; Chabon said he wanted to replicate the sense of a filmmaker’s roving camera that dollies and pans here and there and everywhere. Stylistically, it seems to resemble a passage from Ulysses; just as the characters are supposed to change, so too does the very mode of telling their intermingled stories.

Chabon is not as adept as, say, Anne Tyler in creating a sense of place — his Oakland is not nearly as vivid or as laden with sentimental landmarks as Tyler’s delicious fictional Baltimore — and he sometimes spins so much pyrotechnically dazzling prose without any advancement of story that it exasperates rather than delights the reader. Inescapably and inevitably, Chabon must be regarded as a stylist but he is not always a universalist: his references to arcane pop trivia may sometimes seem so obscure that readers may reasonably wish for an annotated edition.

Like the ensemble cast of the Quentin Tarantino film Pulp Fiction, the ensemble in Telegraph Avenue are low characters in search of salvation or transformation, and some of them find it in the miracle of human forgiveness.

To me, Telegraph Avenue seems a cross between Jonathan Franzen’s The Corrections and an Elmore Leonard novel, with a few dashes of essence of Tarantino thrown in for good measure. An energetic celebration of genre story-telling that seems freighted with perhaps more episodic scenes than necessary, Telegraph Avenue seems as messy, slippery and yes, as full of irrepressible life as a newborn babe.

Some Girls, Some Hats and Hitler: This rediscovered Holocaust memoir by the late Trudi Kanter tells the true story of a beautiful young Austrian Jewish hat designer who becomes involved with a romantic businessman and flees with him from Vienna to Prague to London amid the horrors engulfing Europe. An editor discovered the book (first published in 1984) in a second-hand London bookshop and became determined to bring it back into print.

The Imposter Bride: Montreal author Nancy Richler’s follow-up to her popular novel Your Mouth Is Lovely tells the fictional story of Lily Azerov, a postwar bride-to-be who arrives in Montreal, marries Nathan Kramer, then abandons him and their baby daughter, leaving only a diary, an uncut diamond and a need to discover the truth about her real identity. ♦