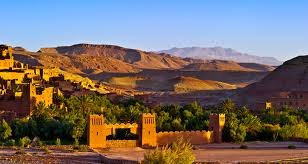 From the earliest days of Hebrew printing to the present, Jewish readers have found great favor in literary accounts of Jewish travellers, especially those who, like the famed 12th-century Benjamin of Tudela, provided first-hand descriptions of the holy city of Jerusalem. One of the acknowledged classics of the genre is Travail in an Arab Land, written some two centuries ago by Samuel Romanelli, a Torah-educated poet, linguist, literary critic and figure of the Enlightenment, who confined his travelogue to Morocco.

Scion of the Portaleone rabbinic family of Italy, Romanelli (1757-1814) travelled through much of Europe in his youth, and in the 1780s joined a circle of Maskilim, or Jews of the Enlightenment, in England. Intending to return to his native Mantua, he sailed from England in 1786, but became stranded in Gibraltar due to lack of funds. Thus began the four-year misadventure that Romanelli would regard as the nadir of his existence, even though it culminated in the zenith of his literary creativity with the publication in 1792 of Travail in an Arab Land (Hebrew title: Ma’asa b’Arav), by far his best-remembered work.

Romanelli had always lived by his wits. An accomplished linguist and metaphysical poet, he was fluent in some ten languages, and is credited with being the first to mention Shakespeare and Milton in the Hebrew language; he also idolized the British poet Alexander Pope. Hoping to rescue himself, he joined a merchant expedition along the Moroccan coast. However, after losing his passport, he became even more deeply mired in the country, with no means of escape.

His elegant, lively account of his misadventures over the next four years was popular with Jewish readers because of Romanelli’s vivid and colorful use of Hebrew; his frank, detailed descriptions of Jewish and Moorish life in the Maghreb, a land that seemed as inaccessible to Europeans back then as it was exotic; and his ability to laugh at himself, as when he observes: “When I say that I am wise, I am treated as a fool, and when I say I am a fool, I am treated like a wise man.”

To survive, he worked as a preacher, a Spanish instructor, a translator, and a secretary and accountant to some notable “court Jews” in Moroccan society, inevitably becoming enmeshed in their perilous intrigues. He also found trouble with several government bureaucrats, even with his landlord’s beautiful daughter, with whom he entered a forbidden love affair.

When he escaped in 1790, he was obliged to leave behind all of the possessions and wages he had accumulated while in bondage. “I left … and never looked back,” he writes of this difficult period, explaining that he, unlike the Jewish slaves leaving Egypt, was not enriched when he made haste from the land of his enslavement.

Romanelli remained associated with the Enlightenment for the rest of his days, and died in Alessandria (in present-day Italy) in 1814. His account of his Moroccan travels and travails has been reprinted often since its first publication in Berlin in 1792. Romanelli was “a gifted artist and professional man of letters who knows how to entertain as well as inform,” writes Yedida K. Stillman and Norman A. Stillman, Romanelli’s most recent translators. The Stillmans, through their fine and sensitive English translation of Travail in an Arab Land (University of Alabama Press, 1989) have made the work accessible to a modern generation of English readers. It is recommended to anyone interested in the Jews of Morocco, and especially to those planning a visit to Morocco, where many of the sights, sounds and smells are still much as Romanelli described them so artfully some two centuries ago. ♦