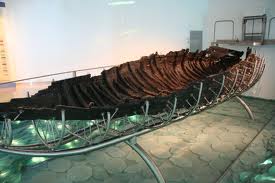 Yuval Lufan has the craggy face and rough hands of a fisherman who goes out onto the Sea of Galilee nightly with lanterns that attract the fish into his nets.

Born on the shores of the lake about 50 years ago, he says he has dreamed since he was a boy of finding a significant treasure in it.

Fifteen years ago, his wish came true. During a period of low water following a drought, he and his brother Moshe found the outline of a boat, about nine meters long by two meters wide, newly exposed in the mud.

“For us, it was like a miracle,” he said of the discovery.

Archaeologists quickly determined that the vessel was ancient, since the iron nails in its hull, and the mortise-and-tenon method by which its planks had been joined, were both typical of the Roman period of about 2,000 years ago.

Clay pots and oil lamps found nearby lent further credence to what carbon-14 dating later confirmed: that the single-masted vessel dated from roughly the First Century CE and had plied the lake at roughly the time of Jesus.

Dubbed the Jesus Boat, the vessel was painstakingly resurrected from the mud, treated to a series of stabilizing chemical baths and treatments for more than a decade, and placed only last year on dry display in a new museum, the Yigal Allon Center, near the place where it was found.

“This should be a must on the itinerary of every Christian pilgrim,” said Mike Rogoff, a veteran tour guide once voted Israel’s best. “There are not a lot of places where you can literally touch the period of the New Testament, and this is one of them.”

The boat likely carried a crew consisting of a helmsman and four oarsmen, and was used for fishing and passenger transport. 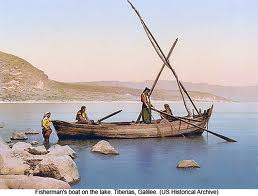 Since Lake Kinneret (as the Sea of Galilee is known in Israel) was the scene of most of Jesus’s ministry, some people speculate that the boat may actually have carried Jesus and his disciples. According to Scripture, it was from a barque like this that Jesus walked across the water and bade Peter to do the same.

The boat was found at Ginnosar, the Ginnosereth of the New Testament, where Jesus once came to shore. Only a few kilometres away is the lakeside town of Migdala or Migdal, the reputed birthplace of Mary Magdalene, the repentent sinner who washed Jesus’s feet with her tears.

The Jewish historian Josephus recorded a dramatic sea-battle here between the Jewish zealots and Romans in 67 CE, during the time of the Second Jewish Revolt (66 – 73 CE), which corresponds to the period when the Jesus Boat was afloat. “The beaches were thick with wrecks and swollen bodies,” Josephus wrote of the devastating clash, which resulted in 6,700 dead on both sides.

While the Jesus Boat may have gone down in this bloody encounter, two of its excavators, Shelly Wachsmann and Kurt Raveh, suggest it was purposely jettisoned, since the mast and some usable timber had evidently been removed beforehand.

The boat was made mostly of cedar, and had obviously been repaired many times by a master builder using planking cannibalized from other ships. A dozen types of wood, including Laurel, Willow, Sycamore, Christ Thorn, Tabor Oak, Judas Tree and Atlantic Terebinth, were used in its construction.

For many, the greatest miracle associated with the Jesus Boat is that it was salvaged at all, since the two-millennia-old wood was so waterlogged that it was as spongy and fragile as wet cardboard. Working against time, and aware that prolonged exposure to air or direct sunlight would harm the delicate structure, conservators dug a moat around the vessel to keep it wet, encased it in a cocoon of fibreglass and polyurethane foam, then raised it from the mud by crane and floated it to shore.

For the first year, the boat was submerged in a holding tank of water, to which goldfish were added to remove worms from the wood. Then it was bathed in a chemical solution for nine years. To keep the wood from disintegrating, the water in the wood cells was eventually replaced with a solution of synthetic wax until the boat was ready for display under ordinary museum conditions.

The Yigal Allon Museum is located on Kibbutz Ginnosar, on the northwestern shore of the lake. Besides displaying the Jesus Boat with related artifacts and a short video, the museum presents the human and natural history of the Galilee area.

Over the years Yuval Lufan has found many other relics along the beach near his home, including Roman and Jewish coins, swords, keys and Christian emblems. Now that the lake has again receded to a record low level, he continues to seek new treasures — but not boats.

“The government said, ‘Don’t find any more boats — one is enough, it caused so many problems,'” he said. “So now we’re looking for other things.” ♦