Report from the Canadian Jewish Chronicle, 1919

Ukraine, the Scene of Wholesale Murder Since Last November. Whole Communities Wiped Out. Troops of Petliura and Grigorieff Principal Culprits. Bolshevik Troops Kill Many in Spite of Rigorous Measures of Their Commanders 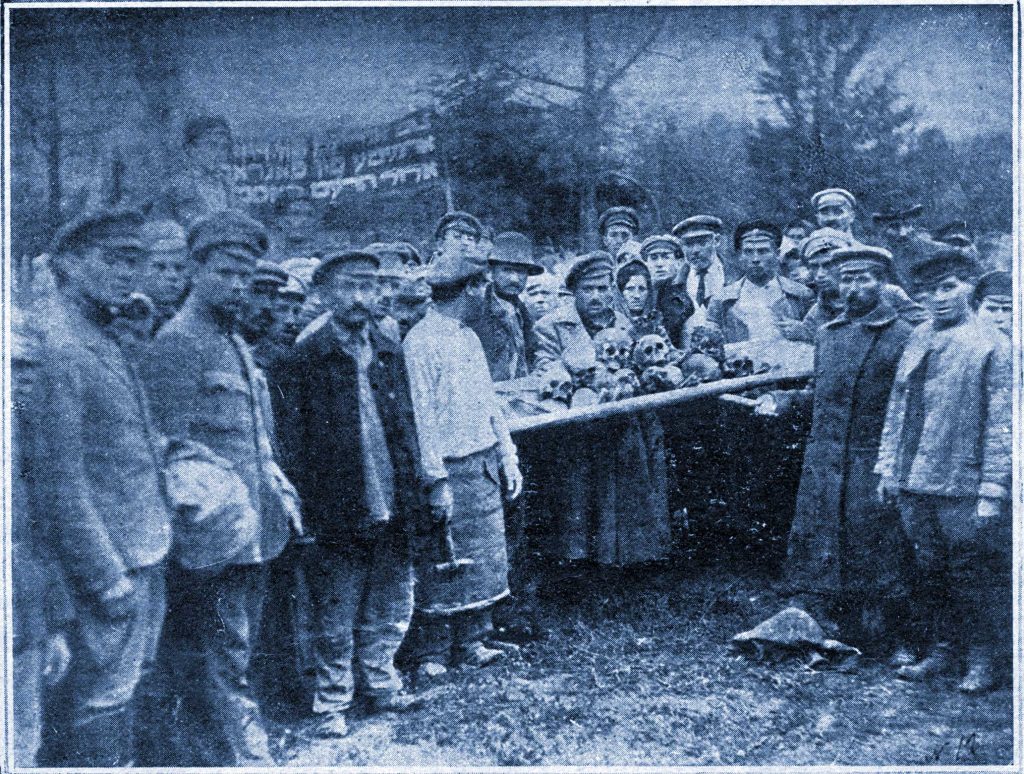 Authentic reports have reached this country of a series of massacres which have raged in the Ukraine since last November, which have resulted in the slaughter of 30,000 Jews. Whole communities have been wiped out by the soldiery of General Petliura, the “antibolshevist crusader,” and General Grigorieff, whose officers, in many cases, were members of the “Black Hundred” which were murderously notorious during the Czarist regime.

A number of pogroms were carried out also by Bolshevist troops in spite of rigorous measures by their officers, who shot down hundreds of them, according to these reports which were made by Meir Grossman, member of the Jewish National Assembly in the Ukraine, and Dr. A Koralnik. Both of these men, who made their way to London from Kieff in order to make their report, are well-known journalists. The responsibility for the reports of this staggering crime against a helpless people is borne by the Jewish National Secretariat and by the Zionist Organization of America. 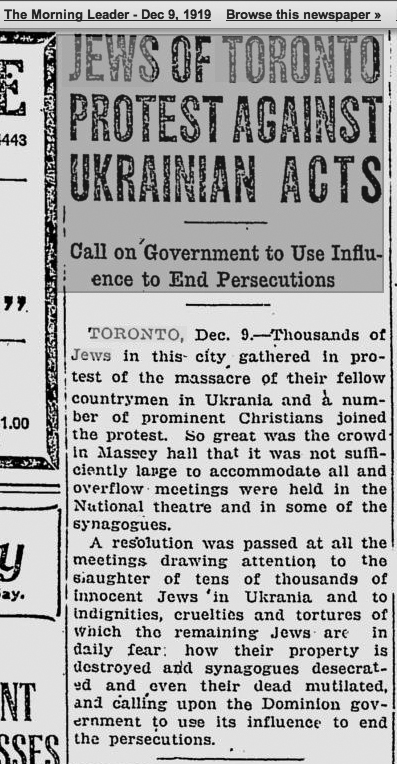 Attached to this report is a list of 38 towns in Southern Russia where these massacres occurred. 5500 were killed at Proskurov. 2000 were killed in Elizabethgrad. There the mob threw bombs into the cellars where whole families had taken refuge. In Zhabokritch the butchery lasted two days. The Jews had locked themselves in their houses, the bandits entered and in grim silence struck the Jews down one after the other. At Toherkassi 800 were killed; at Litire 400. The whole population of Bobri, an agricultural colony, was exterminated, except one old woman and five children.

The Jewish communities of Kublitch, Alexandrovna, Medjiboge and Radomysl were wiped out. At Habidievka all the men, 300 in number, were killed. The town of Novi-Misgovode was set afire and 299 killed. 400 were killed at Freschtine and 500 at Harssine.

The report sets forth that at the present moment the Ukraine is divided into the following regions of power: (1) Bolsheviks hold the provinces of Kieff, Tchernigiff, Kherson, Pltava, the Crimea, and parts of the province of Ekaterinoslav; (2) Denikin holds Podolia, Volhynia and Ekaterinoslav; (3) between both regions Petliura (the so-called Ukrainian Directorat) occupies parts of the provinces of Podolia and Volhynia; (4) in the whole of the Ukraine region there are large robber bands of various dimensions.

“The whole period from the end of November, 1918, is filled with a series of pogroms. They were committed partly by the troops, partly by the civilian population – especially by the lower middle classes – and also by the peasants and workmen. The principal culprits were the troops of Petliura and Grigorieff, whose officers in many cases belong to the Black Hundred, as well as countless bands. The Bolshevist troops have also committed many pogroms, but their military commanders took rigourous measures against them and had many hundreds of soldiers shot who had taken part in the excesses. But the military authorities had to yield in the end to the anti-Semitic feeling to the extent of refraining from sending Jewish Commission to the front.

“Three main periods of the pogroms can be distinguished. The first period was during the victorious campaigns of Petliura against the Hetman (November, 1918 to January, 1919), which includes particularly the terrible pogroms of Zhitomir and Ovrutch. The second period was from February to April, 1919, when the Petliura troops were on the retreat before the Bolsheviks and countless bands arose. 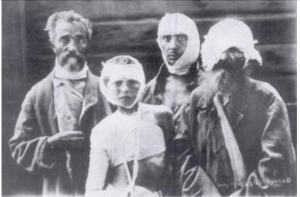 Particularly disastrous was the two-days’ massacre at Proskuroff (February 14-15), of which Colonel Simonsenki was the organizer. It has been absolutely established and registered that 1,700 Jews were murdered on this occasion. In many cases entire families were completely wiped out. When the Central Relief Committee learned of the pogroms, it sent a commissioner with 100,000 roubles to Proskurov to assist the survivors. But the commissioner often did not know to whom he should give the money, as there were no survivors at all.

At Firtschtin, near Proskurov, 400 Jews were killed. An especially terrible affair was the holding up of a steamer on the Dnieper, in the vicinity of Menschikorie, near Kieff, when 103 Jews were seized on board and drowned. Over 60 corpses were recovered.

“The worst period has been raging since April of this year. The troops of Grigorleff, upon capturing Tscherkassi, put to death 800 persons there. Equally terrible were the excesses of Elizabethgrad, where about 2,000 were killed. At Trostienietz there was a Bolshevist garrison, and when the peasants rose against the Bolshevist authority the Christian section of the garrison went over to their side and disarmed their Jewish comrades. Thereupon all the Jewish inhabitants of the little town, down to those who were twelve years of age, were locked into a communal building and kept in prison for two days, and after prolonged deliberations were murdered. More than 400 persons were slain. 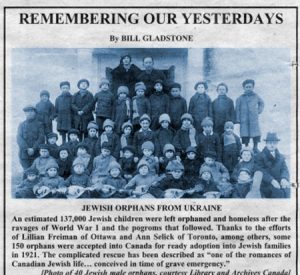 “The Jewish National Secretariat has drawn up an exact record of all the pogroms. From the end of November, 1918, down to May 28, 1919, pogroms and bloody excesses are recorded to have taken place in 127 places. With regard to another 40 or 50 places, it cannot be stated definitely what dimensions the excesses assumed, as the Secretariat is unable to get into communication with them. The total number of Jews who are said to have been killed in these pogroms is from 30,000 to 35,000. A long list of names of those murdered is in the hands of the National Secretariat.

“The figure given is quite reliable, and probably even falls short of the actual truth.

“The Jews tried to organize a self-defence, but this was not permitted by the Bolsheviks, who urged the Jews to join the Red Army if they wished to defend Jewish lives. The pogroms were everywhere marked by the same horrible features; a bestial murder lust and an incredible passion for destruction.

“Under the Bolshevist regime nothing has been left of national autonomy and the numerous Jewish institutions. Not only the communities and the local autonomous bodies, but also the purely charitable organizations have been dissolved. The Pogrom Committee was not tolerated, although it contained Socialist members; but the Bolsheviks did all in their power to suppress the pogroms and to support the survivors. No collections of any kind were permitted, not even for pogrom victims. The Jewish parties have been completely disbanded. All the Jewish newspapers have been suppressed with one exception of the Communist Flag. Schools where Hebrew is the medium of instruction are prohibited, but the Yiddish language is encouraged.

“The Zionist Organization is described and treated by the Bolsheviks as counter-revolutionary, but it has hitherto been impossible to suppress it. As political activity is now out of the questions, all energy is concentrated upon Palestine work. The registration of would-be emigrants has been taken in hand, and more than 70 “Achuzoth” and numerous cooperative transmigration companies have been formed. The Zionist Central Office at Kieff is still in existence. The general Ukrainian Zionist Conference, convened for June, had to be postponed on account of the pogroms and the difficulties of travel. The eagerness to emigrate is exceedingly great, and it is only with the utmost difficulty that those anxious to leave the country can be withheld from a precipitous exodus. The Jewish National Secretariat, elected by the National Assembly, continues its activity, although under prohibition, and it has endeavoured to preserve the communal institutions.” ♦ 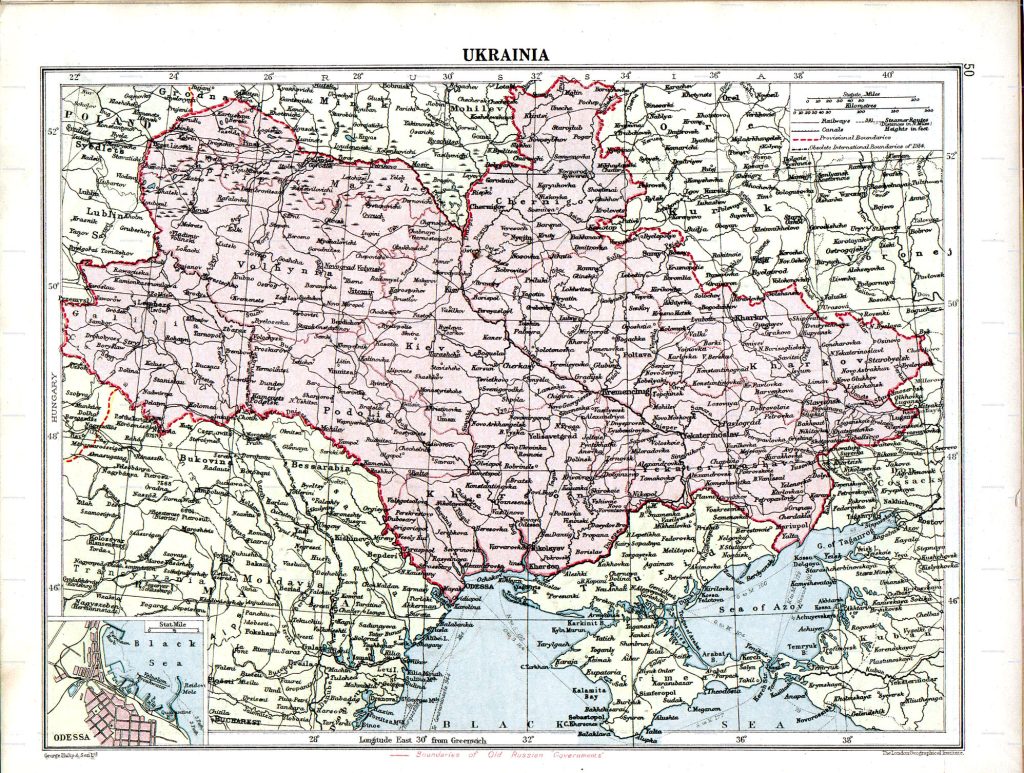