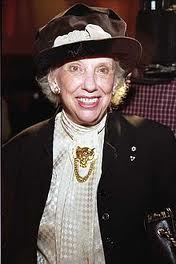 Known for her patronage of the arts and her dedication to social causes, Bluma Appel died of cancer July 15 (2007) in a Toronto hospital. She was 86.

Born in Montreal, Appel supported many arts and cultural organizations as well as individual artists. An officer of the Order of Canada, she was also the founder of the Canadian Foundation for Aids Research.

Renowned for her patronage of the arts and her dedication to social causes, she lost her battle with lung cancer four days after celebrating her 67th wedding anniversary.

Gail Rose Appel, who is married to Appel’s son Mark, said her mother-in-law was diagnosed with cancer about two months ago. “It’s extraordinarily difficult. Bluma was larger than life. She’s a public person as well, so she’s had enormous impact on that basis, but she’s also had enormous impact on our lives,” she said.

“She was a person who was ahead of her time in spotting trends and hoping to do something that made an enormous difference.

She made it her mission “to put women on the boards of every bank and institution and put women forward. I think that was just an extraordinary contribution.”

Although born and raised in Montreal, Bluma Appel became a prominent member of the arts community in Toronto where a theatre has been named after her.

She supported organizations such as the Canadian Opera Company and Royal Ontario Museum, and also assisted emerging independent actors, comedians and musicians.

Appel is also the founder of the Canadian Foundation for Aids Research.

Due to her commitment to artistic and social causes, she was made a member of the Order of Canada in 1988 and was elevated to Officer in 2001. In 2005, she became one of only three people to be recognized with an honourary DORA award for her support of Canadian arts and culture.

Appel is survived by her husband Bram, her sons Mark and David, and her five grandchildren. ♦