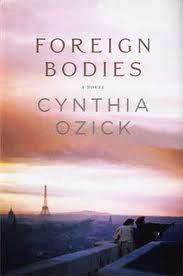 Foreign Bodies, Cynthia Ozick’s sixth and possibly best novel, is modeled after The Ambassadors, a late novel (1903) by her idolized “Master,” Henry James, that he considered his best work. James’s novel explores what was perhaps his favourite theme: the juxtaposition of uncouth America and the more refined, cultured world of Old Europe. Ozick’s aim, according to publisher Houghton Mifflin Harcourt, was to retrace The Ambassadors “as a photographic negative, in which the plot is the same but the meaning is reversed.”

Ozick’s book is a shimmering sea of exquisite sentences that washes over the shore of the readers’ consciousness, wave after wave bearing the delightful flotsam of keen allusions, puns, symbols, metaphors and memorable phrases: “Lili’s uneaten potato lay cold and congealed on her plate like a guillotined head.” And yet, for all of Ozick’s virtuosity, the meaning of Foreign Bodies seems hard to fathom.

The collision of values between Europe and America has sparked many such plots. We are reminded of Patricia Highsmith’s delightfully noirish The Talented Mr. Ripley (1955), in which Tom Ripley goes to Italy to find the expat American Dickie Greenleaf, ostensibly to rescue him, but ultimately to murder and impersonate him. In the E. M. Forster novels Where Angels Fear to Tread (1905) and Room With A View (1908), the Americans are replaced by Brits who are irredeemably stodgy and stiff-mannered as compared to the passionate Italians.

It is 1952 and Paris is awash with war refugees, Jewish and otherwise, the streets abuzz in a cacaphony of languages. Ozick’s protagonist is Beatrice Nightingale, a spinsterish New York schoolteacher who ventures to Paris to rescue her wayward nephew Julian at the behest of her distant (California) and bullying brother Marvin Nachtingall.

It seems that Marvin’s gentile wife, the former Margaret Breckenridge from a family of American bluebloods, has been institutionalized and cannot regain her right mind until Julian comes home. (How deftly Ozick places the children of grubby Jewish immigrant peddlers into the genteel tapestry of American high society; now it is Marvin who objects to “smelly foreigners.”)

Julian is one of many “imitation baby Sartres and Gides” infesting Paris, each “sitting in cafes over their inky manuscripts, an aperitif placed just so at the nearest knuckle to authenticate the parody, the foolish superannuated play-acting.” Despite Bea’s best attempts, Julian refuses to be rescued; eventually Bea learns that he is secretly married to Lili, a Jewish refugee from Transnistria, a match certain to horrify his well-gentrified father. Aimless as a pigeon, Julian’s unhappy sister Iris also takes flight to Paris, and lands in the bed of Dr. Montalbano, an American mountebank preying on the gullible.

Bea, fiftyish and childless, was once married to Leo Coopersmith, a composer who left her for Hollywood. Now in Paris, forced into the role of ambassador, she walks a fine line, sometimes embellishing and sometimes withholding information — even lying — as she tries to do the right thing: she is not just her brother’s passive slave. In the process she rediscovers that she has a voice and mind all her own. Feeling empowered, she removes the grand piano from her tiny apartment, a relic of her marriage to Leo. Suddenly she has enough space to be herself.

Just as Bea has uncluttered her life, so too has Ozick uncluttered Foreign Bodies of the sort of chokingly dense prose with which James stuffed The Ambassadors, which, although reputedly very fine, is still a punishingly difficult book to read. Foreign Bodies, by contrast, is refreshingly readable; Ozick’s reversal of James on this point is most welcome.

While their conceptions of Europe and America differ greatly, both authors utilize the same techniques of ambiguity and fidelity to point of view in order to reveal or hide discreet shades of meaning. And the meaning of Foreign Bodies? An attempt to insinuate Jews into the heart of American society, the way Dara Horn put Jewish players at centre stage in her Civil War novel, All Other Nights? An attempt to show how much the landscape had been levelled by the war? In Ozick’s conception, Americans and Europeans alike, all except Bea, seem to reach a new nadir of vacuousness. Despite the cloudiness of her purpose, it seems clear that Ozick, as she worshipfully mirrors her idealized “Master,” emerges as a master herself. ♦