A Little Panic at Yonge St. Crossing — Crowd Burst Around Behind One Train and Ran in Front of Another 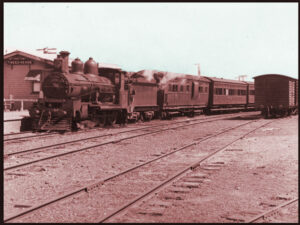 The Chippewa came in about 10.30 with a crowd of passengers, anxious to get to their homes. As soon as they could disembark the stream of people poured off the wharf and began crossing the tracks. An excursion train from Goderich had been standing uncoupled, and the shunting of its cars caused a few minutes delay. When it finally pulled out, the crowd rendered impatient from waiting, rushed around the end of the moving train and were almost caught by a heavy freight going in the opposite direction. Only the strenuous efforts of two policemen and the watchman prevented disaster.

Two women fainted and many others were badly frightened. Familiar as we are with the flock of sheep-like tendencies of excursion crowds it is a marvel that the freight did not cut through the middle of a crowd with results that can be left to the imagination.

This is another addition to the list of the “might have beens,” and affords plenty of ground for conjecture as to the probabilities of the future if some change is not made in the traffic at the Yonge street crossing. ♦