Peddlers All: Stories of the First Ashkenazi Jewish Settlers in Barbados, edited by Simon Kreindler. Trade paperback, softcover, 450 pages. US $35. Published privately in 2017 by the author; iamsimonkreindler @gmail.com 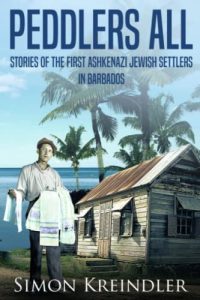 The British colonized the Caribbean island of Barbados in 1627, and the first Jewish settlers arrived the following year. In 1654, an influx of Jews arrived from Recife after that Brazilian seaport was retaken by the Portuguese, strengthening a Sephardic community that lasted about 270 years and died out in the early 1930s.

This is not the community that Simon Kreindler focuses on in Peddlers All; rather, his focus is the Ashkenazi Jewish community that arose just as Sephardim Jewry’s slowly flickering candle was dying out.

The first Ashkenazic newcomers were Polish Jews escaping the harsh economic conditions and anti-semitism of Europe. Typical of Jewish immigrants anywhere, they took up the difficult but time-honoured profession of peddling, raising enough funds to send for their families. “Friends followed and within a few short years a community was born,” writes Kreindler, whose parents were among the first wave of Ashkenazi settlers to the island.

Putting the book together was more an act of compilation rather than scholarship for Kreindler, who now lives in Toronto. After conceiving of the project, he contacted dozens of Jewish “Bajans,” some of whom he hadn’t seen since they were children growing up together on the island. The book presents dozens of their stories, told in their own words, illustrated with photographs and minimally edited for consistency.

Being a grassworks work of local history, Peddlers All will be a great resource for people who are connected to the island’s modern Jewish community, particularly members and descendants of the Altman, Pillersdorf, Bernstein, Raizman, Saunders, Kreindler and many other families who are the focus of chapters. Fortunately, the content is rounded out somewhat by a brief summary of the earlier Sephardic history, giving the reader a fuller, albeit fleeting sense of the full Bajan Jewish tapestry.