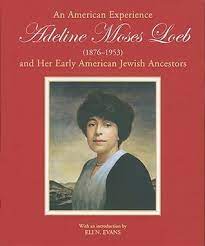 Adeline Moses Loeb, the focus of this gold-plated and impeccably produced biographical and genealogical study, was a banker’s daughter in Alabama and St. Louis, Missouri, who, in her early life, went from riches to the proverbial rags. Then she married Carl M. Loeb, founder of a powerful Wall Street firm, and rode a magic carpet back to wealth. But in truth, she always possessed an immense treasure in the form of an extraordinary genealogical heritage inherited from both sides of her family. This book, the impetus of her grandson, Ambassador John L. Loeb, Jr., is a broad and colourful tapestry depicting eight generations of Adeline’s prominent American Jewish family.

“Without a scintilla of doubt, it was my paternal grandmother, Adeline Moses Loeb, who sparked my lifelong passion for genealogy – especially Jewish genealogy,” writes Loeb in a Foreword. “That passion was the genesis of this three-part book.”

Part One offers biographical essays on Adeline and Carl, including an essay derived from an oral memoir made by their daughter, the late Margaret Loeb Kempner.  In Part Two, John L. Loeb, Jr. describes his family’s close ties with the Sons of the Revolution in the State of New York, and their sponsorship of a long-touring museum exhibit focusing on the role that Jews played in early American history. Part Three is an 11-chapter exploration by genealogist Judith Endelman of Adeline’s lineage from the 17th century to the present.

The book succeeds in bringing the personalities of Adeline, and to a lesser extent her husband Carl, warmly back to life. As we read, we are reminded of what a good genealogical study should be – not just names, places and dates, but a richly layered narrative that combines the bare genealogical facts with well-balanced biographical and historical material. For many of us, of course, the trappings of such lives as lived by Adeline and her American forebears will seem fairy-tale-ish and unfamiliar: these were not impoverished shtetl Jews but seemingly an altogether different breed, a merchant class possessed of money, power, influence, celebrity and connections. The list of accomplished Americans related to Adeline is impressive and puts one in mind of Neil Rosenstein’s The Unbroken Chain.

The book includes handsome full-colour reproductions of many notable oil portraits. There are also numerous genealogical charts, maps and illustrations, all rendered in a lovely and unified style, evidently sparing no expense. The striking colours of the dust-jacket – blue and red – combined with the glossy white of the interior connote an all-American content. An exemplary model of a published genealogy, An American Experience is a well-appointed book that perfectly suits its well-appointed subject.