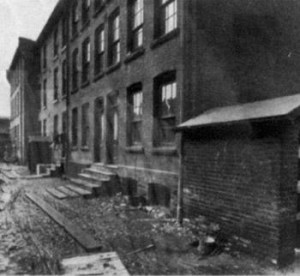 “Picturing Immigrants in the Ward,” a recently installed exhibit at the City of Toronto Archives, offers many tantalizing glimpses of Jewish, Italian and other recently arrived immigrants in the congested “Ward” neighbourhood of downtown Toronto as it existed from about 1905 to 1930, focusing mostly on the era before the First World War.

The Ward was a mixed-use area of modest frame cottages, row houses, restaurants, factories, shacks, stables, junkyards and two- and three-storey commercial buildings with family apartments or businesses upstairs. It grew up to the west and north of Old City Hall as a landing area for the thousands of mostly European immigrants who arrived in the city each year.

Toronto’s “foreign quarter,” as long-established Torontonians sometimes called it, was bounded by University, College, Queen and Yonge Streets. Its congested main streets and often-muddy and malodorous laneways and alleys were considered unhealthy, especially for the children who played in them from morning until evening, who were often dirty, barefooted and ragged.

Juvenile delinquency, the lack of suitable green space and the presence of contagious diseases such as tuberculosis and diptheria were serious concerns of the day. Social service agencies, Jewish organizations and the Toronto Star sought to send children on summer vacations to the country — the Star’s “Fresh Air Fund” was established to do just that — or at least on picnics to Toronto Island.

The Ward was a loosely-zoned neighbourhood where almost anything seemed permissible, as evidenced in the array of photographs from newspapers, city reports, social agencies and other sources assembled here.

A 1910 photo-spread in the Toronto World showed a house surrounded by crates of bottles piled high all around its outer walls, partly obscuring the windows; the caption read, “Chestnut Street home where sunlight is not considered a boon compared to the profits of traffic in empties.”

Toronto’s Works department took some 3,000 photographs in the Ward around 1911, hoping to document the overcrowded and unsanitary conditions. The city’s chief health officer cited hundreds of health-code violations, using the photographs as evidence.

One photo showed a three-story tenement building that was inhabited by six families who shared a single outdoor privy with the factory hands who worked on the top floor, 40 people in all. The building’s only source of water was an outdoor tap that sometimes froze in winter.

A photograph of a grocery store and Hebrew bookstore with their names in Yiddish in the windows, are among several that capture the flavour of a neighbourhood that had become the centre of a growing Yiddish-speaking district in the city’s inner core.

Although the streets of the Ward were dotted with synagogues and storefront “shtieblach,” none appear in the exhibit, which also attempts to represent the area’s Italian and other ethnic aspects.

The exhibit includes two early 20th-century wedding portraits from the Goldenberg and Bochner families respectively, loaned from the Ontario Jewish Archives. Even working-class people with hardly a nickel to spare, it seemed, always had a good set of clothes at the ready in case of a marriage in the family.

Wrapped along the walls of the lobby of the City of Toronto Archives on Spadina below Davenport, the exhibit consists mostly of photographs but also features maps, pages from official reports, sections of newspaper stories, and a separate display about the growth of Chinatown on Elizabeth Street.

It also includes four large-scale photographs by Susan Dobson which depict the area in recent times. Although the gritty and blighted cityscape of 70 to 100 years ago has disappeared, the neighbourhood’s human scale has also disappeared, obliterated by today’s towering megalithic superstructures such as hotels, hospitals and the City Hall. Thanks to decades of unrelenting urban renewal, the former character of the Ward has been erased almost completely out of sight.

The curators’ insistence that the exhibit is really about “how photography shaped ideas about Central and Eastern European immigrants in early 20th-century Toronto” seems misguided. This show is really about a city neighbourhood of tremendous importance to our collective history that has been shockingly allowed to disappear, almost without a trace.

“Picturing Immigrants in the Ward” continues until May 2013 and admission is free. See www.toronto.ca/archives for more details. ♦ 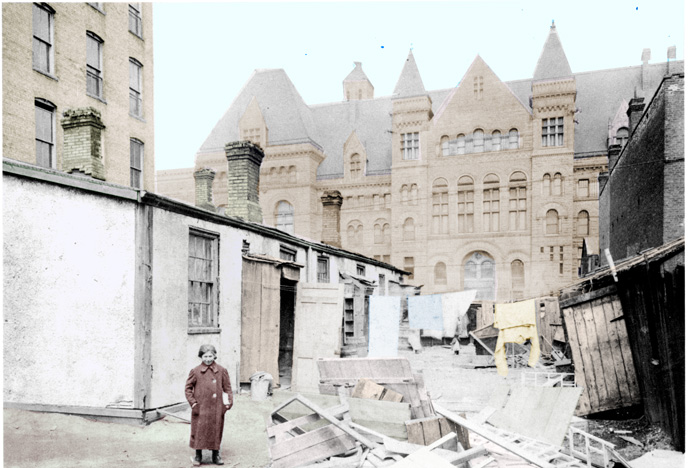 Above photo “Slum, Rear 21 Elizabeth Street, 1913” is from City of Toronto Archives, Fonds 200, Series 372, Subseries 32, Item 187. Colourized by BG. The girl is standing in the middle of what is now Nathan Phillips Square.