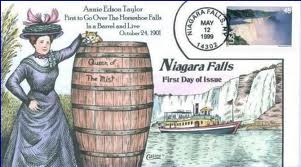 The Niagara Falls Visitor and Convention Bureau recently gave me an envelope filled with complimentary admission tickets to local museums and fun houses, and for a couple of hours I was like a kid again as I visited them all in succession.

The Ripley’s Believe It Or Not! Museum, the Guinness Book of World Records Museum, Louis Tussaud’s Wax Museum, the JFK Assassination Institute and Museum, the Elvis Museum, the wonderfully oddball Niagara Falls Museum — all these were on my list. So was something called the Ripley’s Moving Theatre and, prepared for a moving experience, I gave my ticket and waited to be admitted.

There were two shows to choose from, Jurassic Park and the Roller Coaster. I chose the Roller Coaster, having very little idea of what I was in for. “This isn’t a real roller coaster, is it?” I asked. “Oh, no, sir, it’s just a simulation.” I had heard of these simulated rides where the seats tilt a quarter-inch this way or that, giving the occupant the remarkable illusion of great movement.

I should have become suspicious when I took my seat and the usher advised me to do up the seat belt. Likewise when I put my camera bag down on the platform at my feet and she said, “Oh, no, you can’t put it there, it’ll fly out once the ride starts.” I also should have been tipped off by the large handlebar-type grips on each side of the strangely enclosed seat. 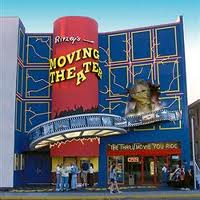 Lights out, and the huge movie screen showed the view one would have from a roller coaster just starting to climb up a steep track. Instantly I had an ominous feeling as the seat slowly tilted back. At the crest of the curve, there was a moment of perfect stasis — and then I was thrown violently this way and that, up and down and back and forth, as the roller coaster descended and raced around the devilish course at breakneck speeds.

I consider bailing out of my seat, a somewhat risky proposition given the intensity of the motion, when the scene suddenly shifted to a car rally in the desert. I felt every bump as I bounced over the dirt road at a subsonic pace. A few moments later I crashed into some rocks. If it had been a nightmare, that crash was probably the point at which I would have jumped awake, my pillow wet with sweat. But no. Instead I was instantly transported to a narrow mountain canyon for more speed racing. Then to a daredevil helicopter ride, tightly hugging the rugged mountainous terrain.

The scenes kept shifting until I felt like I was churning in a giant mixmaster. I turned away, unable to watch anymore, just holding on for dear life. I heard someone screaming and I realized with a shock that it was me. Then I noticed that all the other screaming patrons of Ripley’s Moving Theatre were 17 years old or younger.

Blessedly, the ride stopped and I wandered out in a cold sweaty daze. Only then did I see the sign, warning that the ride is not for pregnant women or anyone with back, heart, neck and a variety of other physical and nervous conditions. (I am all of the above, except pregnant.)

Would I go into the Ripley’s Moving Theatre again? Sure — right after my next parachute- jumping lesson. Or better yet — right after I plunge over the Falls in a barrel. ♦