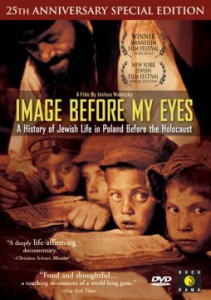 A photograph, the old saying goes, is worth a thousand words.

Sometimes, however, a photograph’s worth cannot be measured in words. By capturing an ephemeral moment in exquisite detail, a photograph can be far more articulate than language. Irreplaceable images of our culture from days past can be infinitely instructive as to how we lived.

Over the years, numerous beguiling publications have caught the fancy of Jewish genealogists and others interested in what the songsmith has romantically dubbed “the way we were.”

Take, for instance, Image Before My Eyes: A Photographic History of Jewish Life in Poland, 1864-1939, edited by Lucjan Dobroszycki and Barbara Kirshenblatt-Gimblett. This classic photo collection made such an impression following its publication by Schocken in 1977 that it was later the basis of an equally poignant video documentary.

The photos focus on our ancestors and cousins going about their lives — learning, cooking, bartering, discussing, praying — in the stalls, markets, squares, homes and synagogues of the proverbial shtetl. In a few cases, readers have discovered their own ancestors in these pictures. More typically, however, we accept the pictures as a generic description of how our great-grandparents lived before the Shoah.

In these photographs we see and learn things we could never gather from genealogical documents. A marriage document has never yet revealed the styles of clothing of the celebrants, the architectural turn of synagogues and homes, the merchandise (and mud) of the village marketplace, the tailors, tanners and tinsmiths at work.

The material for Image Before My Eyes came from New York’s YIVO Institute, which also supplied the material for the notable 1988 collection, A Century of Ambivalence: The Jews of Russia and the Soviet Union, 1881 to the Present, edited by Zvi Y. Gitelman. Well recommended, the book highlights some 350 black-and-white photographs from the YIVO collection.

Two more highly worthy collections of photographs have recently been published. The first — Poyln: Jewish Life in the Old Country — features the photographs of Alter Kacyzne. Although not well known today, Kacyzne (1885-1941) was a popular Yiddish poet, dramatist and journalist who cut a major figure in Warsaw’s prewar literary scene. In 1921 the Forverts, the high-circulation American Yiddish newspaper, commissioned him to document images of Jewish life in Poland for the benefit of its largely immigrant readership. The Forverts published Kacyzne’s photographs regularly for a decade.

Kaczyne’s photographic eye is no less evocative, nostalgic and startlingly ethnographic than another great photographer — Roman Vishniac — to whom he is sometimes compared. Like Vishniac, his pictures reflect the warmth and spirit of a community on the verge of destruction. “Bialystok, 1926” shows a pretty young seamstress daydreaming at her work; “Lublin, 1924” captures a meditative moment of a man at study in synagogue; and many of his Warsaw scenes reflect the tired degradation of market life.

Kaczynes was killed in Tarnopol in 1941 and his photographic archives was destroyed. But the material he had sent to the Forverts was presented to the YIVO Institute for preservation. Polyn, an elegant hardcover presentation of hundreds of Kacyzne’s photos, is published by YIVO in conjunction with the New York publishing house, Henry Holt and Company.

Yiddishland, compiled by Gerard Silvain and Henri Minczeles (published in French by Hazan, Paris) goes even further in its photographic remembrance of the vanished world: its pages also include evocative postcards, illustrations and cartoons. At nearly 600 pages, this small-format softcover collection excels at capturing the ineffable, mystical aura — dare one say it? — of the Jewish soul. The book is a deep, heart-rendered sigh for a place and time that are no more. ♦