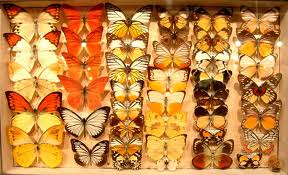 Insect chop suey, sauteed crickets, and pizzas slices loaded with mealworms were among the hors d’oeuvres served recently at a cocktail party at the Insectarium, a Montreal museum devoted to insects.

As a master chef fried locusts in a wok, guests sampled cricket-stuffed mushrooms and acras, a Caribbean pasta dish liberally sprinkled with mealworms. For adventurous children, there were even insect lollipops.

“We put on the insect tastings because we wanted people to experience another aspect of insects,” said museum director Guy Belair. “Insects are very rich in protein, and are seen as a way to reduce hunger and famine in some parts of the world.”

Except during the annual tastings, visitors to the $10-million Insectarium, which occupies an insect-shaped building in Montreal’s Botanical Gardens, are generally discouraged from eating the exhibits.

The roughly 350,000 preserved insects in the collection include many unappetizing species anyhow, such as the dung beetle, the disease-carrying tse-tse fly and the poisonous tarantula. Many other species, such as the South American morphos butterfly with its spectacularly large and colorful wings, are far too rare and precious to be part of the insect smorgasbord. 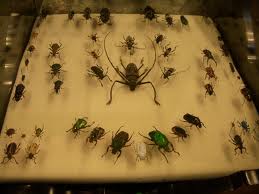 Georges Brossard, the Insectarium’s founding director, abandoned a former career as a notary because of his unbridled passion for bugs; now in his mid-fifties, he has made some 91 entomological expeditions so far. Ten years ago, he asked the Botanical Gardens and the City of Montreal to take over the 250,000-specimen collection that filled the basement of his Montreal-area home. The Insectarium opened in 1990, incorporating also the scientific collection of Brother Firmin Laliberte, representing an additional 100,000 specimens. With an emphasis on research as well as education, the Insectarium receives many university students and professional entomologists engaged in research projects, and even lends out bugs on occasion.

Subdivided into six geographic zones, the insects run the gamut from repulsive to beautiful. An example of the former is the large hissing cockroach from Madagascar, which whistles by forcing air through its respiratory passage. And perhaps the most magnificent of all insects is the morphos butterfly, whose iridescent wings possess minute scales that fragment light into dazzling colours.

Also in the South American section, a display case features two rows of six-inch damselflies with their shimmering wings outstretched, arranged like a squadron of aircraft. Some Amazonian natives venerate these giant dragonflies as if they were the souls of deceased persons.

From the Orient comes the cobra butterfly, whose protective coloration resembles the head of a cobra about to strike. From Africa come various species of locust, which can be as unthreatening as ordinary grasshoppers until they begin swarming. The bane of farmers, a swarm may have more than 100 million locusts and consume approximately 3,000 tons of vegetation per day.

From Europe comes the death’s head hawk moth that was featured in the novel and movie Silence of the Lambs, and from Australia comes the gynandromorph ornithoptere butterflies, half male and half female, the two halves looking like completely different species. Even the common North American monarch butterfly, which is the Insectarium’s emblem, possesses extraordinary traits. Each fall, eastern Canada’s monarchs migrate south to hibernate atop mountains in Mexico. In the spring, newly-metamorphosized monarchs that have never left Mexico make their way back to the same Canadian forests that their parents left. 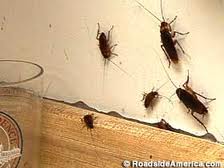 Though small, insects pose enormous questions for entomologists. One need only consider the sex life of some species of firefly to recognize the complexity of their tiny world. Fireflies send out light signals to attract insects of the opposite sex, and each species has a flashing rate — a sort of Morse code — of its own. But sometimes a female answers a male of a different species in order to lure him close so she can eat him. Adapting to this treachery, males have started sending out several kinds of messages to test the fidelity of the female. “If the female answers each time, the male says, ‘No, no, I’m not going there,'” says Sylvie Tousignant, director of educational programming. “It’s an amazing phenomenon that has been very much studied in the literature and scientific works.”

Another section of the Insectarium promotes the prodigious capabilities of insects. Very much geared to pupils — the human sort — the exhibits in this section translate insect achievements into human terms. If an ant can drag a load 20 times its own weight, for instance, a person with the same capability could drag a piano or a car. If a fly can jump 150 times its own height, a person with the same capability could jump — how high? In Toronto, the answer would be some percentage of the CN Tower. In Montreal, the answer is to the top of the Eiffel Tower.

An ant colony, bee hives, and other live insect societies are normally on display, but a strike by the city’s blue collar workers, who usually feed the insects after hours and on weekends, has precipitated the live insect’s temporary removal. Captive insects require careful attention, according to Sylvie Tousignant, who keeps butterflies and moths as pets, and takes them with her when she and her boyfriend go camping or on motor trips. “Next year we’ll stop doing this, because we’re having a baby,” she says.

Guy Belair says he never met an insect he didn’t like, except perhaps for tarantulas and the like. Ask him to choose his favourites within the collection, and he’ll tell you he can’t: “It’s like having five children and having to choose one.” Georges Brossard also seems to possess an indiscriminate passion for all things creepy and crawly. A short film shows him running wildly after butterflies in a Venezuelan jungle, net in hand. In one scene, he smiles broadly, seemingly as contented as a dung beetle in its favoured element, as hundreds of bugs and moths swirl around him. “They can crawl into my nose and my ears, I don’t care,” he declares. “As long as they’re bugs, I’m happy.”

Located across from Olympic Stadium where the Montreal Expos play, the Insectarium offers full-colour cards that resemble baseball cards, each one featuring a different insect. Open daily 9 a.m. to 6 p.m. ♦