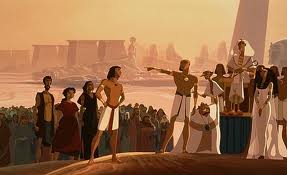 Based on the Biblical story of the Exodus, Dreamworks Studio’s visually stunning animated musical The Prince of Egypt opens across North America during the lucrative Christmas market (1998), and the studio hopes to see profits on the $70 million production soon.

The first full-length animated film to focus on a Biblical narrative, The Prince of Egypt highlights the relationship between Moses and his Abrother@ Rameses, the man who will be Pharoah. The film paints them as rambunctious teenagers who, as grown-ups, are reluctantly driven apart by a destiny that neither one wants.

Jeffrey Katzenberg, one of three celebrity partners behind the Hollywood megastudio Dreamworks SKG — the others are Steven Spielberg and David Geffen — was the film’s executive producer. Some wry pundit has already noted that Katzenberg, who received a golden handshake worth tens of millions when he left Disney in the mid-1990s, has gone from The Lion King to The Zion King. Katzenberg says it was Spielberg who first suggested the idea for The Prince of Egypt “and I didn’t have to hear it twice.” 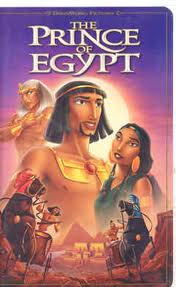 “David (Geffen) gave me a wonderful piece of advice. He said, ‘You can’t slap a happy ending on it, you must do it faithfully and you must do it accurately. And you don’t know anything.’ Four more truthful words were never spoken than ‘You don’t know anything,'” said Katzenberg, who spoke with hundreds of scholars, religious leaders and others during the four years that it took to make the film.

When 80 years of action is crammed into an hour and a half of cinematic time, major compromises are inevitable. God is practically written out of the script, for instance, and the revelation at Sinai seems tacked on as a hasty afterthought. Aaron, who loses his role as Moses’s spokesperson, ends up being little more than an ineffectual sidekick.

The scriptwriting team used numerous other shortcuts, simplifications and cheats. Most of the film’s intended audience (adults and children alike) probably won’t mind the overly-simplified narrative, however, dazzled as they’re bound to be by the visuals and by Stephen (“Pocahontas”) Schwartz’s and Hans (“The Lion King”) Zimmer’s catchy music.

So confident is Dreamworks of having a hit on their hands (which they probably do) that they’ve produced three related CD albums by top recording artists. Besides the soundtrack album, they’ve produced a CD of inspirational music and another of Nashville-style tunes based on the Prince of Egypt story.

According to director Brenda Chapman, the short burning bush scene was “the most difficult thing to do in the movie and it was the last scene completed. We thought of doing it off-screen but I think the audience would have felt cheated.

“We went through a lot of angst and fear and trepidation about what the voice of God would be and what this event would look like and feel like, because God is a very sensitive subject to a lot of people. The one thing we weren’t going to do was have a booming voice like Earl Ray Jones.”

Studio technicians tried blending a multiplicity of voices to represent the Lord, but wound up with a sound so distracting that listeners couldn’t concentrate on the words. Another simulated voice “ended up sounding like a computer named HAL in 2001,” Chapman confided.

Some scholars consulted during production suggested using the voice of Moses (Val Kilmer) for God, so Moses wouldn’t be afraid when confronting the Almighty. Though he’s not credited with the role onscreen, Kilmer was ultimately given the honor of speaking the part of God. ♦