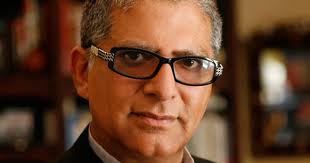 From out of the infinite void comes a new book by Deepak Chopra — How To Know God: The Soul’s Journey into the Mystery of Mysteries — along with Chopra himself, fresh off an early-morning flight from Washington DC, visiting Toronto as part of an 18-city promotional tour.

At 53, the Californian growth-industry guru appears refreshed; he rose at four for his usual two hours of meditation, he says. But he seems a tad grayer than the picture of him that graced Newsweek’s cover some 2-1/2 years ago. His 1993 bestseller Ageless Body, Timeless Mind may have declared the aging process to be reversible, but it ain’t necessarily so.

No matter. As we drive into the city, he explains that the material realm is nothing but a vast flickering illusion akin to a celestial cinema projecting at the speed of light. The cars and trucks along the highway, the landscape of warehouses and office buildings — none of it is what it seems, he says. “All of that springs forth from the infinite void. You see it as a solid, but that’s just a trick of the senses.” 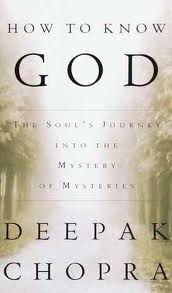 According to Chopra, the universe regenerates itself anew every microsecond, far faster than the brain can comprehend; he calls the phenomenon Genesis Now. “The entire universe is a play of light in God’s mind.” That’s one of the key ideas in How To Know God. Another is that the quest for meaning in life always involves God because the concept is “hardwired” into the human brain.

How To Know God presents a seven-tiered schema of human responses and attitudes, ranging from the secular to the sacred, the down-to-earth to the divine. The structure may be likened to a ladder between earth and heaven, with each rung invested with increasing holiness. The sixth level belongs to prophets, saints and visionaries; the seventh reflects a perfect union with God.

“These concepts originate in Vedanta, an ancient Eastern wisdom tradition, they’re not original ideas,” he acknowledges. “I use my personal background and experience to express them. I’m giving them a contemporary language.”

Chopra’s contemporary language is much in demand. Combining Eastern and Western religious philosophies with smatterings of quantum physics and neuroscience, many of his books have been bestsellers. The Seven Spiritual Laws, which he penned on a flight from Perth to Singapore in 1995, has sold more than two million copies. Ageless Body, Timeless Mind has sold about 1.5 million; one legendary appearance of Chopra on Oprah was said to have generated sales of 137,000 copies of that book in a day. As well, he’s lectured from India to Indiana for up to $25,000 a talk.

Because he argues, in books such as Creating Health and Journey Into Healing, that doctors should focus on building good health rather than merely eliminating disease, Time Magazine has dubbed him “the poet-prophet of alternative medicine.” But he has not turned his back on the medical establishment completely. “We need a complementary approach,” he says. “If I break my leg, it would do no good to meditate. I would still need an orthopedic surgeon.” The Chopra Center for Well Being, the deluxe spa he operates in La Jolla, Cal., has several physicians on staff.

How To Know God is Chopra’s 25th title and the 26th is well on the way. “I’m now writing a book on the phenomenon of death — how death is the creative response of the soul. So, yes, something is always springing forth from the infinite void.”

Lawsuits are also springing forth: they swirl around him like so much bad karma. A family man, he was the focus of a Clinton-style sex controversy that began when a San Francisco prostitute claimed he had visited her several times and paid for his pleasure by credit card. When a U.S. magazine, the Weekly Standard, published the prostitute’s allegations, Chopra launched a $35 million lawsuit for defamation. After he demonstrated that he’d loaned his credit card to a friend while he was in India, the prostitute recanted and the magazine apologized and paid him $1.6 million. 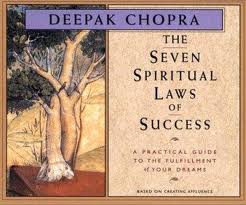 The lawsuit, according to Chopra, represented “an act of love meant to lift them to a higher state of awareness, accountability and respectability.” Despite his public image as a soft-spoken advocate of love and tolerance, he’s gained a reputation as a legal barracuda for the numerous other lawsuits he’s launched in regard to what he asserts was an ex-colleague’s attempt to blackmail him.

Earlier this month, a San Diego judge threw out the last claim against him, and Chopra says he’s ready to withdraw the cases he’s instigated if he gets an apology and costs. “No one, in all these years, has ever won a case against me or collected a penny from me,” he states emphatically.

In many ways, life was simpler for the Delhi-born doctor 20 years ago, when he was a practising endocrinologist in the Boston area and an associate professor at Boston University. Chided by a specialist in Ayurvedic medicine for his stressful lifestyle and heavy intake of coffee and cigarettes, he turned to transcendental meditation. Within two years he was a partner in a TM clinic in association with the Mahareshi Mahish Yogi, who had brought the technique to the West. But two years later he had grown disenchanted with the celebrated mystic and his circle.

“I felt his followers were going the way of too many religious institutions: they were becoming too fanatical, believing their way is the only way. I always believe I should seek the company of those who seek the truth, and run from those who say they have found it.”

In 1985 he self-published his first book, Creating Health, and delivered it to the Harvard bookstore by bicycle. An agent for the publishing company Houghton-Mifflin spotted it and bought the rights for $5,000. Next he wrote Quantum Healing in 1988, then Perfect Health in 1991. As his books gained commercial success, he branched out into tapes and CDs, herbal teas, massage oils and other products. After working as a consultant in a private health spa, he established the Chopra Center for Well Being in 1995. The Center has become a Mecca for the Hollywood elite and Chopra routinely rubs elbows with celebrities too numerous to name.

Despite his role as a pop philosopher, he readily admits he doesn’t have all the answers. “Looking, looking, looking and never finding,” he says of his own spiritual quest. “Or finding bits and pieces, here and there. We never find the absolute truth. It’s impossible. The more we explore the unknown, the bigger it gets, because by nature, it’s infinite.”

And what about that title, How to Know God? Isn’t God ultimately unknowable?

“It’s a classic title from one of the ancient Vedantic texts. It’s also borrowed from something Christopher Isherwood wrote in the 1940s. If I had said, ‘How to Know God Absolutely’ … that would have been antithetical. Or ‘How to Experience God’ … that might have been better, because you can experience bits and pieces — flavors — of the divine.

“But the truth is, you can’t know God. Not completely.”

The car stops at his destination. We shake hands and a moment later he strides with boundless energy towards his second media interview of the day. ♦

Originally appeared in the Globe and Mail. © 1999