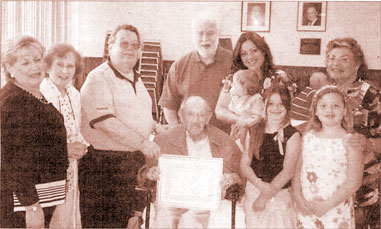 At the recent Sons of Jacob Shalom Lodge’s general meeting, Gold was honoured. His family and friends celebrated his 100-year milestone with an open house at the home of his daughter, Gloria de Hond, in Thornhill.

Gold’s father, Shia Shalom (Zushie) Gold, was one of the early members of the Sons of Jacob. Max has been a member for more than 50 years. He says the organization was founded to provide cemetery privileges for its members and for social purposes. It also raises money for charity.

“The Beth Emeth Bais Yehuda shul was first conceived in my father’s store, Gold and Gold Tailors in the Bloor and Dovercourt area,” says Gold.

Born in New York City in 1905, Gold was one of five children. His parents came from Minsk, Russia, at the turn of the century. The family lived at 105 St. Patrick Street in the Dundas and University area in Toronto.

“The city has grown amazingly,” says Gold. “I remember when University Avenue was a dirt road. At that time, I would go with my friend on a horse and buggy, and for three cents, we could take a streetcar to High Park.”

He says that when he was a child, the Spadina streetcar only went as far north as Bloor Street. “There was a coal stove in the middle of the car and at Bloor Street the conductor went to the back of the car, which became the front. We were frozen and that was a modern streetcar.”

Gold learned to dance as a teenager. “We would get together at someone’s house to dance because except for the YMHA on Brunswick Avenue at College Street, there were few clubs, and the big social clubs did not want to have anything to do with Jews,” he says.

He belonged to the Workmen’s Circle and recalls when they held meetings at Queen’s Park “and the police would come on their horses and chase us away.”

He worked as an auto mechanic and moved to New York, where he learned the needle trade in his cousin’s business.

Returning to Toronto in 1932, he married Esther Silverman and continued working in ladieswear. He became a manager, a position he held until his retirement when he went to help his brother, Ben, who owned Gold’s Drugs at Dundas and Bathurst streets.

The Golds had two children, Gloria and Marty, who passed away 10 years ago. After being widowed for 14 years, in 1981, Gold married Helen Smith.

Gold’s daughter, Gloria de Hond, says her father is hard of hearing, “but he really is on the ball. He even reminds me of my appointments.”

She says she would go to her father and “ask him a question on any topic He had the answers to all of them. He even explained to me the workings of a car, so I could understand it.

Gold adds, “I don’t wear glasses and I never had an accident, but I decided that it was time to stop driving.”

He and Helen live in the recently opened Valleyview Residence. At the residence, he participates in exercise classes, plays bingo and attends music sessions. “I do whatever I can do, and we attend the Shabbat shalom programs.”

Helen says that her husband “gets particular joy from Gloria, who volunteers at Valleyview and other places as a clown using the name Glori Be.” De Hond is a professional clown who performs at birthday parties and other events and belongs to Toronto Clown Ally. “She is amazing and makes a lot of people very happy,” Helen adds.

Gold says that looking back he can’t believe that he is 100. “I went to school, got married, had children — time goes by and before you know it, you are old.” ♦

This article first appeared in the Canadian Jewish News and is reprinted courtesy of the author. © 2005 by Cynthia Gasner.