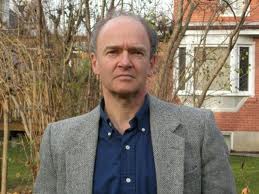 Toronto native Ken Sherman loved fishing as a boy at Jackson’s Point, where his family had a summer cottage. But these days, whenever he tosses out a line, it’s usually a line of poetry.

A creative writing instructor at Sheridan College and the University of Toronto, Sherman often returns via his poetry to his boyhood, the summer landscapes of rural Ontario, and the eternal mysteries that lie beneath the illusory surface of life.

In A View, the poem that opens the collection, an adult narrator sits on an “ancient pier / watching patches of mist / lift from the lake / like ghosts reluctant to go.” A neighbouring island will appear soon, he assures us, and a visit there will provide a relatively rewarding view back to the pier; he went there as a child. But the most spectacular perspectives, he says, occur beneath the water’s surface in “the deep”, which holds “a silent richness we’re meant to visit, not inhabit.”

A similar fascination with the murky depths occurs in the title poem, The Well. As richly detailed as a short story, the piece reflects the author’s typical preoccupation with the black void of death. Its narrator tells of hearing, as a boy, a radio report of a lad who had fallen down a dried-out well. Lying in bed, he had imagined the other boy “trapped in a darkness more terrifying than the darkness that surrounded my bed.”

As evidenced by this new collection, Sherman is a gifted writer of crisp, evocative poetry that is both accessible and meaningful. He also pens critical essays (a collection of them, Void and Voice, appeared several years ago) and excellent short stories, as witness the piece that appears in the latest issue of Parchment.

Asked why he prefers poetry, probably the least popular of modern literary forms, he offers a wry smile. “First of all, I’m not sure that a writer chooses the form that he writes in — I sometimes think that the form chooses the writer. And I like the intensity of poetry. I think that every single poem, if it’s successful, gives you an illumination, a kind of spiritual awakening.”

In any case, popularity isn’t everything in literature, he adds. He cites the case of Franz Kafka — “one of the greatest writer of the 20th century, who was unknown when he passed away except to a small circle of friends.”

If poetry is unpopular, it’s more an indictment of our post-literate culture than of poetry itself, he implies. “Poetry demands a degree of concentration that fewer and fewer people have. What distinguishes a poem from a short story is that a poem demands to be reread: you don’t get it on the first reading. In fact, sometimes you have to read it several times before it unfolds itself. We live in a world of rapid transit thinking, and fewer people have the ability or the will to spend that kind of time on a piece of literature.”

Married with children, Sherman writes mostly on summer holidays and weekends. The muse struck him relatively early in life, he says. “I was 12 years old and our English teacher had read Emily Dickenson’s poem, Because I Could Not Stop For Death. It had a huge impact on me, hearing that poem. I was walking home from school — it was a cold wintry day — and I found lines just coming and welling up inside of me. When I got home I ran upstairs and wrote out the lines and I had my first poem.”

He counts Dickenson, A.M. Klein, Leonard Cohen, Albert Camus and Ernest Hemingway among his influences. Irving Layton, whom he first encountered at York University in 1969, became a mentor. “Irving used to say to me as encouragement, ‘If you’ve written one good poem, you’ll do it again.’ I never quite understood why he was saying this, and I guess it’s because of this fear we have about this miracle not happening again.”

He acknowledges that the scope of poetic imagination has retreated enormously since the days, for example, of the romantic poets (“Shelley, Keats, Coleridge, all those people”) whose works he studied in graduate school. Whereas poets once wrote about the whole world, he says, today they limit themselves to the interior world of the human spirit. “I would say that the spiritual journey that poetry takes us on is the most important journey in our lives. It’s certainly more important than any political or any materialistic journey.”

He is nothing if not a connoisseur of literature. A shelf behind him holds dozens of books. We trade opinions of various titles including Henry James’s The Ambassadors and Joseph Conrad’s The Secret Agent.

“God owes each of us a second life,” he declares, “so we can read all the great books that we’re not going to read in this lifetime.” ♦