THIS article, written in 1994, provides a snapshot of the cemetery mapping committee of the Jewish Genealogical Society of Canada (Toronto) at an early stage of its work. Project volunteers have now completely transcribed Roselawn and several other Toronto Jewish cemeteries, which have been posted to JewishGen’s Online Worldwide Burial Registry. Visit www.jgstoronto.ca for more details. 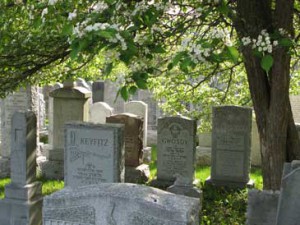 After five seasons of mapping cemetery sections and transcribing stones, 39-year-old programmer analyst Howard Shidlowsky seems to know Roselawn, the large Jewish cemetery in midtown Toronto, like the proverbial palm of his hand. On most dry Sunday mornings between May and October, Shidlowsky and other volunteers from the Jewish Genealogical Society of Canada meet at Roselawn to transcribe the information from its roughly 10,000 tombstones, some of which date from 1906.

“We just finished triple-checking the Workman’s Circle section this morning,” he says, standing in a field of stones. “There are four rows of the Weber section that need to be transcribed, and we need to finish the Lubavitcher section. Then we’ll be through the whole north side.”

Members of the Society’s cemetery committee, of which Shidlowsky is chairman, seem to know why the Hebrew name for a cemetery is “Beit Ha-Chaim,” the house of the living. Although mute, many of the stones tell poignant stories. Painstakingly, Shidlowsky chalks over the face of a grave marker whose lettering has been nearly worn smooth from the elements. Then he delicately sprays water over it, and several rows of Hebrew writing magically appear, momentarily coaxed back from the verge of their own non-existence. These articulations, which he records in a notepad, will be entirely illegible in a few years.

About 22 organizations each administer a section of Roselawn; you can tell where the sections change, says Shidlowsky, by noticing the variations in the fence along the street. A few of these organizations have kept excellent records, but most were haphazard record-keepers at best; a few are either defunct or have lost their records in flood or fire. Thus, the committee has had to start from scratch, taking down important information — such as name, date of death, age, names of parents, and sometimes place of birth and much more — from the stones.

The field work at Roselawn, which is perhaps three-quarters finished, is only the first stage of the project. A volunteer has begun keying the information into a computer data base, which may eventually be accessible to researchers seeking information on burials, via either a computer link or microfiche. 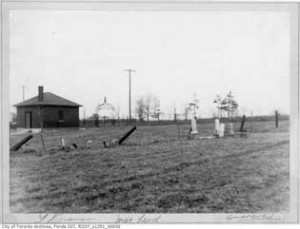 “We don’t know where to put the data base,” says Shidlowsky. “At the moment all our records are sitting in my hall. It would be wonderful if the Society had an office and somebody was working there all the time. Barring that, somewhere in the Jewish Federation of Toronto would be great. We don’t have to be the ones looking after it.”

Initially, the cemetery group had the goal of transcribing every Jewish cemetery in Canada and putting all the information into a central data base. Indeed, much of eastern Canada has already been done (by Raymond Whitzman of Montreal), and incomplete lists have been made for Toronto’s two oldest cemeteries, on Pape and Jones Avenues in the east end of the city.

Pape, a small fenced-in rectangular cemetery containing some 300 burials, predates much of the busy cityscape that now surrounds it. Established in 1849, it is Toronto’s oldest Jewish cemetery and the oldest in the pre-confederate territory known as Upper Canada. The Jones Avenue cemetery, Toronto’s second oldest Jewish burial ground, was established in 1883.

Several years ago, barbed wire was installed along the top of the fence at Pape to keep out intruders, and swastikas and antisemitic slogans had to be removed from a wall at the Jones site last winter. Vandalism, along with acid rain and natural erosion, are regarded as the enemies of the cemetery committee, and the reason its volunteers are attempting to record the historic information of Toronto’s Jewish community before it is effaced from the stones. 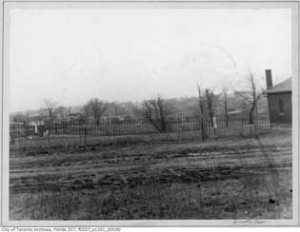 “After we go back to Pape and Jones, then our next stop might be Lambton Cemetery,” says Shidlowsky, referring to the large burial ground on Royal York Road in west-end Toronto, extablished about 1910 by members of the Junction synagogue. The group also intends to photograph the tombstones of one section at Roselawn — the Toronto Hebrew Benevolent Society — as an experiment.

Henry Wellisch, the Vienna-born retired draftsman and ace genealogical researcher who serves as president of the 155-member Society, says that it regularly receives requests for burial information from Toronto cemeteries. “As long as there are people committed to doing the work, we’ll continue the project,” he says. ♦