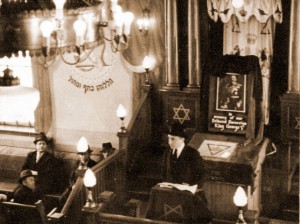 Their emotions bared during the holy hour at the chanting of the mourning prayer “Ail Mole Rachomim” by the leader and his choir of 40 voices as he consigned the spirit and soul of his late Majesty King George V. to the keeping of the Almighty King of Kings, men and women attending special services at the McCaul Street Synagogue yesterday stood unashamed as unrestrained tears coursed down their cheeks.

So touching became the strains of human voices as they prayed for the soul of the departed monarch that a woman, one of the the thousands which crowded the assembly hall of the synagogue to capacity, fainted and had to be carried out.

The congregation stood as Rev. Bernard Wladowsky led his choir through the long prayer before the opened Ark, in which stood the many holy scrolls and above which burned the eternal light. The archway of the Ark was fittingly draped with the mourning colours of purple and black of the Royal household. At the conclusion of the prayer, in which the name of King George was injected and chanted, men and women wiped the tears from their eyes and stained faces. 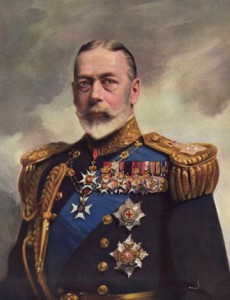 Never before has such a public memorial service been held in a synagogue and never before did such a holy edifice know the draping with mourning colours of the Holy Ark. Never, in the recollection of the oldest members, has so touching and fitting a service been seen amongst the Hebrew holy temples. Rev. Mr. Wladowsky and his choir were congratulated upon the delivery of the service, done with all the dignity, impressiveness and beauty of the ancient orthodox manner.

Max Clavir, J.P., was chairman for the service. “We Jewish people have suffered a great loss in the passing of the King,” he told the mass. “We enjoyed the freedom of the land. For thousands of years we wandered, were persecuted and still are persecuted in many lands, at present under the barbarian, Hitler. But under the British Flag, reigned over by his late Sovereignty King George, we have known a freedom unthought of in other countries.

“We must remember, under the rule of his late Majesty we became equal with all, by the Balfour Declaration. Jewish people received recognition of their services to the Motherland. We seek to-day, then, to express our deepest sympathy for the loss of His Most Gracious Majesty, King George V., and hope that our new ruler, King Edward VIII, will be as tolerant as his father and as sympathetic to the rights of minorities throughout the British Empire.”

Rabbi Samuel Sachs, the visiting guest-speaker, spoke as one inspired and the silence which followed at the conclusion of his address showed how he had touched the hearts of those present.

The speaker recalled the celebrations in synagogues last year during the Jubilee of the King and Queen. “It gave cause for great rejoicing and allowed us to show the gratitude we felt in our swelling hearts, because we ever remembered the British Empire was a haven to the Jews.

“To-day we mourn the loss of our great benefactor. We recall that the whole future of the Jews was bound up in the new relationships under King George V. when he ordered the issuance of the Balfour declaration. But the rest of the Jewish scene in the outer world presented a dark picture of despair.

“Our attitude is attributed to the gracious, democratic, great-hearted monarch who had ruled over the British Empire for 26 years. Many things can be taken out of the life of the King-Emperor. He was neither a King for minorities or majorities, but a King for all. His greatness alone brought Great Britain and all its Dominions into the mould of the British Empire.

“My friends, the King may have died, but to us he can never be dead for his personality cannot die, and will speak to us from the his grave. In the hearts of the Jews he will live forever.”

A silence fell over the assembly and the chairman asked that all rise to observe two minutes in silent prayer. At the close of the period, the Last Post and Reveille rang out from the bugle of Bugler W. Jordon, of the De La Salle Band.

Rev. Mr. Wladowsky then chanted the prayer for the dead which so affected the audience. At the conclusion of this prayer, he sang the praises of the new King, Edward VIII., and blessed him, offering joyful prayers that long may he reign and follow in the paths of glory of his gracious father.

The Jewsh Branch No. 256 of the Canadian Legion, British Empire Service League, marched 150 strong from the Zionist building to the synagogue and took part in the services. They were led by Sergt. Jack Arons and Marshall Ben Isaacs. ♦

For more about the McCaul Street Synagogue, click here.