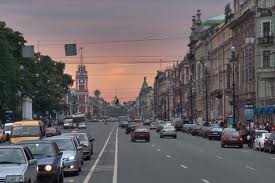 Our first day in St. Petersburg, Russia, we took a tour that showed off the magnificence of this city of exquisite palaces, cathedrals, prospekts and Venetian-style canals.

We saw the Peter and Paul Fortress, St. Isaac’s Cathedral, the Admiralty, the Church of the Resurrection, Nevsky Prospekt, Smolny Cathedral, miscellaneous grand palaces, Palace Square and the Hermitage, one of the world’s great art museums. We also peeked into a few elegant modern hotels and a few primitive department stores, each with security guards posted prominently. Even our tour bus featured an unarmed guard.

“Of course we have some crime, but not as much as Los Angeles, Detroit or Miami,” our tour guide, Anna Kornilieva, told us as we rolled through the architecturally resplendent streets. “I saw an American television documentary about St. Petersburg and the new Russian mafiya, and I didn’t recognize my own city. It was a Hollywood fantasy.”

Perhaps somewhat unfairly, this exquisite Baltic jewel has attained an image as a crime-infested city where kidnappings, robberies, shoot-outs and murders are common. An English-language newspaper for tourists warns against the various scams that are perpetrated against visitors. The city comes across as a sort of lawless megapolis of the Eurasian Wild East, paralleling the American Wild West of more than a century ago.

History might have something to do with it, since it was the anger of these people, or at least their grandparents, that sparked the Russian Revolution. The bus pulled into Revolution Square, scene of massive bloody confrontations in 1905 and 1917. I hopped out to take a photograph of the statues in the square, and a Lada rushing recklessly by nearly wiped me off the map.

By contrast, the grand halls of the neighbouring Hermitage seemed peaceful. Formerly belonging to the Czars, this series of palaces is now one of the world’s foremost art museums, housing millions of works. They include the so-called Hidden Treasures, a collection of dozens of impressionistic canvases by Van Gogh, Degas, Matisse, Cezanne, Picasso and other celebrated modern artists. Emboldened after 50 years of secrecy, the Russians are now proudly displaying these priceless paintings which they confiscated from Germany at the end of WWII. Few here agree that Russia should return them to the Germans, just as few can forget Germany’s 900-day wartime siege of the former Leningrad.

On my second day in St. Petersburg, I decided to forego another prepackaged tour, and ventured out independently. Since the public buses are crowded and unpredictable, I tried hitch-hiking, a common and acceptable form of commuting, especially by tourists.

There are not enough taxi-cabs in this city of five million, so visitors rely on the kindness of strangers — plus a few American dollars, or their equivalent in rubles — to get around. All one has to do is stand at the curb and gesture towards an approaching vehicle as if hailing a cab. Chances are pretty good that it will stop.

The rules are fairly straight-forward. Keep out of cars with several passengers for safety reasons. Avoid foreign cars, which are impossible to repair. Don’t get into a shiny, late-model European car because the driver may be a gangster. If it’s an old, beatup-looking Lada carrying only the driver — hop in.

A suitable car stopped almost as soon as I began gesturing at curbside.

“Nevsky Prospekt?” I asked the driver, a middle-aged male, the car’s only occupant.

I hopped in, and as we were crossing the bridge to Vasilievsky Island, my chauffeur confided that he spoke a “very little bit” of English.

“How much would you like? One dollar? Two dollars? Three dollars?” I asked, feeling like a rich Westerner.

But my aristocratic smugness vanished as we went over some streetcar tracks and the glove compartment clattered opened. Some papers and debris — and a small black handgun — fell out and landed at my feet.

“Oy!” I shouted, feeling a jolt of shock, groping for the door handle.

“Nyet! Nyet!” exclaimed the driver. He reached over and picked up the “gun” — only now I could see that it wasn’t a gun at all, just some kind of peculiar engine part for his Lada.

A few minutes later he pulled over by the Aeroflot building on Nevsky Prospekt, and I handed him an American $5 bill. I felt lucky. In what other city in Europe or North America could you travel hallway across town for so little — and still arrive alive? ♦