Book review: Sledgehammer: How Breaking With The Past Brought Peace To The Middle East, by David Friedman, former US Ambassador to Israel. HarperCollins, 2022. 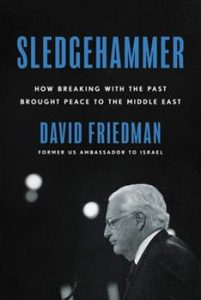 In Sledgehammer, lawyer-turned-ambassador David Friedman offers some excellent background to the important story of the Abraham Accords, which stand as the most significant development in Middle East peace since Israel’s treaties with Egypt and Jordan.

Representing a once-in-a-lifetime victory, the Abraham Accords saw the normalization of relations between Israel and the United Arab Emirates, Bahrain, Sudan, Kosovo, and Morocco.

The Accords are so significant that officials in the Biden Administration rarely refer to them by name, so as not to give credit or credence to former US President Donald Trump. It was the former president, after all, who entrusted his diplomatic staff to overturn longstanding shibboleths of the US State Department and the Democratic Party and pursue a new path. In short, ambassadorial staff had to use a metaphorical sledgehammer to smash enshrined policies and attitudes, much like the actual sledgehammer Friedman had used to launch a Jerusalem archaeological project despite fears of protests and violence.

For roughly half a century and more, the Department had insisted that peace between Israel and the wider Arab world would come only after Israel had made peace with the famously intractible Palestinians. Terrorist bombs, killings and repeated deadly skirmishes were the primary fruit of this prolonged stalemate.

As Friedman observed: “Doing the same thing over and over and expecting different results is called insanity. For decades the US State Department called this diplomacy.” A longtime supporter of Israel, he was driven to try an alternate approach that had better odds of success.

The ascendency of Donald Trump to the Presidency created a rare window of opportunity where the State Department’s usual playbook could be tossed aside. As when a medieval knight confronts a dragon, all that was required was steadfast faith, extraordinary cunning and daring, and the moral courage to stand one’s ground.

As a first measure, the Trump team wanted to recognize Jerusalem as Israel’s capital and move the American Embassy from Tel Aviv to Jerusalem in accordance with a longstanding American policy that an array of previous presidents had expediently neglected to enact. As expected, strong opposition came from Secretary of State Rex Tillerson, who argued at a late-night meeting in the Situation Room that the move would have a politically incendiary effect, like “pouring gasoline on a fire.”

Countering Tillerson’s negativity, Friedman offered superb arguments in favour of the move, and closed with an appeal directly to Trump.

“’Mr. President, the world is watching. What they are watching for is whether you are truly the courageous leader you claim to be, or just another politician who gets cold feet and breaks a promise. Ther choice here couldn’t be more stark: stand with an ally and fulfill the will of the American people, or cower in fear to rogue actors and Islamic terrorists. How you decide this issue will reverberate in Iran, North Korea, and anywhere else that America is challenged, and your message of peace through strength is all on the line, right here.’

“No one responded. There were a few seconds of awkward silence and the president said, ‘Of course that’s right. Let’s do it.’ He left the room.”

Tasked with implementing the president’s decision, Friedman applied his native cunning to circumvent covert attempts at sabotage from the State Department. Remarkably, and under astonishingly difficult circumstances, he got the Embassy built under a tightened schedule so its official opening could be celebrated before Trump’s first term ended. (The Arab world did not explode; the book reveals that many Arab nations seem as tired of Palestinian truculence as many in the West.)

Trump also proved a courageous friend to Israel by supporting Israel’s strategic annexation of the Golan Heights and by approving, for example, use of the term “disputed” rather than “occupied” territories in official diplomatic language.

Friedman and the American peace team, which included Jared Kushner, next floated a more traditional Israel-Palestinian peace deal that would give Israel heightened security and sovereignty over parts of Judea and Samaria, but at great cost. Not unexpectedly, negotiation of the Sovereignty Agreement seemed strewn with obstacles, including the oversized egos of the various political players involved and the stalemated Israeli political system in which no party could form a government. 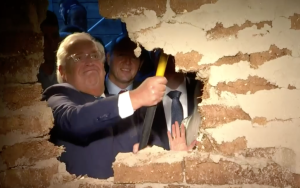 Friedman uses a sledgehammer to open an archaeological site in Jerusalem, an episode he recounts in Sledgehammer (Times of Israel)

What ultimately prevented the Americans from pursuing the Sovereignty Agreement was an offer from the United Arab Emirates to normalize relations with Israel if the deal was abandoned. Problematic as it was, the deal prove useful as a decoy bargaining chip. One by one, Bahrain, Sudan, Kosovo and Morocco came on board with what became known, by a brilliant stroke, as the Abraham Accords.

Sledgehammer is full of colourful episodes, insights into the political minefield of the Middle East, and cameos of such figures as Bibi Netanyahu, Mike Pence, Mike Pompeo, Nikki Haley, Benny Gantz and Palestinian Authority leader Mahmoud Abbas. Friedman captured one remarkable exchange between Trump and Abbas, who comes across as ineffectual, weak and corrupt.

During a 2017 visit to Bethlehem, Trump’s business acumen kicked in as he heard Abbas complain about Israel’s control over Palestinian security. “Trump asked him how much Israel was charging the PA for those security services. Abbas looked stunned. He replied that Israel was performing those services at no cost to the Palestinians.

“The president jumped on this admission. He observed that the Palestinians live in a very dangerous part of the world and have virtually no ability to defend themselves. ISIS, Hezbollah, Hamas, al-Qaeda, Iran – any of them could take over the Palestinian territories in a day. He was incredulous that Abbas was rejecting free Israeli security support when Israel was the only player in the region that knew how to fight these implacable foes. Abbas looked at Trump as if he had two heads – no one had ever spoken to him before with this brutal clarity.”

It’s important to remember that Sledgehammer is memoir, not history, so the narrative is by nature solipsistic, focusing most of the time on Friedman and offering only cursory discussion of the contributions of other players such as Netanyahu and Kushner. Netanyahu’s new memoirs may offer a more thorough account of the Abraham Accords, the potential for which he had apparently tried to relate to several US administrations without gaining any traction.

Trump’s successes in the Middle East, including moving the Embassy and the Abraham Accords, should rightly be regarded as among his crowning achievements. ♦