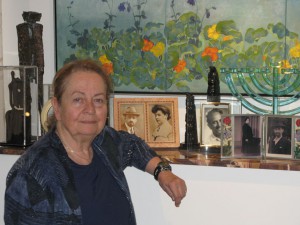 Toronto psychologist Dr. Edna Magder was just a baby when the Nazis deported her grandmother from Vienna, but she knows it wasn’t the first time the Nazis had come to her grandmother’s door.

A group of drunken Nazi soldiers had previously visited her grandmother — Theresia Hanni Brodi — on Kristalnacht, Magder relates. “In the hall was a portrait of my grandfather in an Austrian army uniform. The Nazis saw the portrait, saluted, apologized and left. My grandmother took that to mean that she was the respectable widow of an Austrian officer and that she was safe,” Magder says.

Tragically her grandmother refused to leave Austria illegally while she had the chance, and was deported to Maly Trostinec, a killing camp near Minsk.

Magder and husband Dr. David Magder and two grandchildren, Oren and Aliza, went to Vienna in May to participate in a ceremony in which a “Stone of Remembrance” was installed in the sidewalk outside her grandmother’s apartment at Herminengasse 10 in the Leopoldstadt district of Vienna.

Magder helped sponsor the stone plaque, one of hundreds that have been laid on the sidewalks and buildings in Vienna since 2005 by the Vereins Stein der Erinnerung — the Association for the Stones of Remembrance. Similar initiatives are active in other cities across Europe.

About 80 people attended the ceremony including Jews and non-Jews, locals and foreign visitors. A few elderly Viennese residents, who would have remembered the deportations more than 70 years earlier, were in attendance, including one in a wheelchair with an oxygen tank.

Much like a tombstone, the plaque gave Magder’s grandmother’s date of birth, maiden name, and the date and place of her death. Similar information was given for several others deported from the same building. 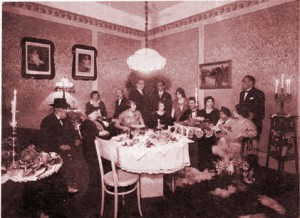 Everyone deported from the building was included in the plaque, which read (translated from German): “In memory of 102 Jewish women and men and 12 children who lived in this house before they were deported by the Nazis. Only five of them survived.”

“It was a bittersweet feeling,” says Magder of the ceremony. “It’s important to me in some way to show my grandmother that family had survived. So I was there with my two grandchildren and my husband. And we made a place for her; she has no grave. But going to Vienna is a very bittersweet thing for me. I’m very steeped in the culture and yet I have a huge amount of resentment towards the Austrians.”

Born in Tel Aviv during the war era, the former Edna Weissman grew up in Israel and served in the Israeli Air Force. She met her husband while attending St. George (now Concordia) University in Montreal. They have been living in Toronto since 1983.

As Magder related in an essay she wrote for the Stones of Remembrance ceremony, her maternal grandmother had worked as a clerk for the Jewish community, had operated a kosher lunchroom, and had been among a circle of Jewish women who embroidered a cover for the coffin of Theodor Herzl in 1904.

Further research turned up an official notice from the city of Vienna indicating that her grandmother had left for Minsk in September 1942. “They made it sound like she went on a holiday. She was sent to a forest near Minsk where the Nazis had set up a makeshift killing camp.”

Magder’s maternal grandfather, Ignaz Brodi, ran a kosher dairy restaurant and had served as an officer in the Austrian army in the First World War. He died in 1922 as a result of being gassed during the war.

“Like many people of my generation, I am always looking for ways to piece together the past. My family spoke very little about what happened, and I only have a smattering of memory and stories. When I walk in Vienna, the streets sound familiar to me; there are stories attached to them but I can’t put them together. There is nobody from my mother’s generation alive who can help me put it all together, and that’s too bad.” ♦

Photos: Top, Dr. Edna Magder stands in front of portraits of grandparents, the Brodi’s. Below, prewar portrait of her Viennese family.