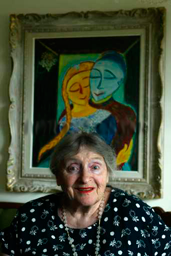 Chava Rosenfarb, the celebrated Yiddish writer who has lived in Canada for more than half a century, has finally seen one of her books get published in her adoptive homeland.

With the publication in 2005 of Survivors (Cormorant Books), a collection of seven short stories about Holocaust survivors, Toronto-based Cormorant Books has become the first Canadian publishing house to produce a book by the Lodz-born writer, whose many awards have included the prestigious Itsik Manger Prize in 1979 and the Sholem Aleichem Prize in 1990.

Her two novels, Bociany and Of Lodz and Love, brought her a rush of acclaim five years ago when the American scholarly Syracuse University Press presented them simultaneously in English translation.

As added proof that the English-speaking world has discovered Chava Rosenfarb, the University of Wisconsin is preparing a new English edition of her huge master work, The Tree of Life, for release later this year. Published originally in Yiddish in three volumes as Der boym fun leib in 1972, the book was printed in English only once before, in Australia in 1985.

Rosenfarb, who is also preparing an English edition of her novel Briv tsu abrashen (Letters to Abrasha), is clearly delighted to see more and more of her work available to English readers. She speaks English fluently but with an accent, and still writes her fiction in Yiddish first.

“Yiddish is sort of the basis for me,” she said, during a recent interview in Toronto. “If I want to write about Yiddish-speaking Jews, it’s the best way to do it, to write in Yiddish and then translate. Although it’s a tremendous amount of work! I could have written new books. But I think it’s important to have it in Yiddish and then in translation.”

While Rosenfarb often does many of her own translations, her daughter, Goldie Morgentaler, an associate professor of English at the University of Lethbridge, translated all the stories in Survivors.

An obvious theme runs through all of Rosenfarb’s novels. A survivor of the Lodz ghetto as well as of Auschwitz and Bergen-Belsen, she emerged determined to chronicle the Jewish life in Lodz before and during the Nazi devastation. Her books Bociany and Of Lodz and Love are prewar preludes to The Tree of Life, which follows 10 characters from 1939 through the liquidation of the ghetto in 1944.

In the stories in Survivors, Rosenfarb studies the afterlife of the tiny demographic subset of European Jews who survived Hitler; and observes that while most are successful in building new lives for themselves on new continents, they can never be liberated psychologically from the indelible horrors they have experienced.

Rosenfarb is an expert storyteller with a classical, almost Tolstoyan touch, as evidenced right from the opening piece, “The Greenhorn.” An engaging sketch, it highlights the ironic differences between the idyllic romantic vision many Canadians may have harboured of Europe versus the tortuous realities that continued to burn in survivors’ memories after the war.

In “Last Love,” a terminally-ill survivor returns to Paris and induces her husband to arrange a young lover for her to enjoy once before she dies; she expires in the young man’s arms, forever transforming his youthful innocence. It is almost as if she, the survivor of untold camp horrors, has somehow become a vampiric carrier of those horrors within her own tormented heart.

As we know, and as these stories show, life for the liberated is nothing like a bed of roses, except perhaps as regards the thorns. “Edgia’s Revenge,” a masterful psychological study of a group of survivors in Montreal, describes the burden of guilt, shame, anger and terror, all shrouded in a veil of silence, that many carry throughout their lives.

Born in 1923, Rosenfarb began writing poetry at the age of eight. Soon after liberation, as a displaced person in Brussels, she submitted a poem, The Ballad of Yesterday’s Forest, to a Yiddish journal. The poem made a sensation.

“They were very taken by this poem. First of all, I was young, I was a survivor, it was in the first weeks after liberation — they got extremely excited about it,” she recalled. A British businessman-poet brought her to London and helped her publish her first poetry collection in 1947.

She arrived in Montreal in 1950, raised two children, taught at the Workmen’s Circle, and became enmeshed in the city’s famed Yiddish circle. She wrote The Tree of Life over a period of 13 years. She lived in Montreal for 50 years, relocated briefly in Toronto, then moved to Lethbridge several years ago to be with her daughter.

“I love Lethbridge because of the mountains, which are visible in the distance all the time. The landscape is beautiful. Lethbridge is nice and pleasant, it’s warm and the traffic is not heavy. It’s a sweet life.”

As with other Holocaust writers here, the experience of Europe and the camps still dominate her literary imagination, even decades after she arrived on Canadian soil. When asked whether she believes the Holocaust will continue to occupy her creative efforts exclusively, she takes on a pensive look.

“This is what I wonder myself: whether the Holocaust holds me so tight that I can never free myself from it. I wouldn’t want it to happen. I don’t like it. But for the time being, I have to employ myself in all aspects of Holocaust memory and all kinds of things that happened during the war. Maybe one day I can go onto other things. Whether I will have time for it, I don’t know.”♦