Six years after his two brilliant novels, Ship Of The Hunted and The Empire of Kalman the Cripple, rolled off the presses in English for the first time, Yiddish author Yehuda Elberg has died in his sleep in Montreal at the age of 91.

A Holocaust survivor who helped set up a network of safe houses for Jews escaping the Warsaw Ghetto, Elberg wrote about Jewish life in his native Poland before and during the Holocaust, and about Jewish immigrants transplanted to America after the European devastation. Some of his stories and novels, like those of his associate and distant cousin Isaac Bashevis Singer, were first serialized in the New York Daily Forward and other Yiddish journals.

Well known within the relatively tiny world of Yiddish letters, Elberg won the Itzhak Manger Prize, often described as the Nobel Prize of Yiddish literature. Golda Meir, in her last public appearance, presented it to him at Tel Aviv’s Habima Theatre in 1977. He also won an Israeli prize, the Prime Minister’s Award, in 1984.

He remained largely unknown to English-speaking readers, however, until Syracuse University Press published the books in translation in 1997 to a chorus of critical acclaim. Writing in The Globe and Mail, Alberto Manguel called them “unequivocal masterpieces” and hailed Elberg as “an unsung master in our midst.”

After years of toiling in obscurity, Elberg relished the sudden attention, as he did the invitations to read at literary festivals and to spend his summers as a scholar-in-residence at Oxford and other universities. “At the age of 85, I gave birth to twins,” he would boast, with all the pride of a new father.

A perfectionist who worked closely with his translators and wouldn’t approve publication of a manuscript if he felt it could still be improved, Elberg left behind unpublished translations of at least three novelettes and story collections, some of which will likely be published posthumously.

Although he had worked as a textile engineer in Poland and as a real estate developer in Montreal, he “saw himself first and foremost as a writer and lecturer,” said his son, Nathan Elberg.

Having received rabbinical ordination as a youth, he never practiced as a rabbi. But he filled his works with the richness of Jewish knowledge and lore and became a noted collector of rare old Hebraic manuscripts and Judaica.

“Sometimes, I’d go there and there’d be some Hassidic book dealers in his place,” recalled his friend and translator, Barbara Galli, a teacher of religious studies at McGill University. “One time he told me that he sold a couple of manuscripts for $1.5 million. His collection of books was really part of his art. He put so many Talmudic sayings and so much Jewish thought into his writings that you could learn a tremendous amount about Jewish history, religion and life just by reading his novels.”

Elberg was born in Zgierz, a suburb of Lodz, in 1912, into a distinguished rabbinical family that could trace its lineage back to the revered medieval sage known as Rashi. His father was the head of a regional rabbinical court and a renowned author of biblical commentaries. His maternal grandfather was the senior rabbi in Warsaw at the time of the Holocaust. The family were connected to the Ger branch of Hassidic Jewry. 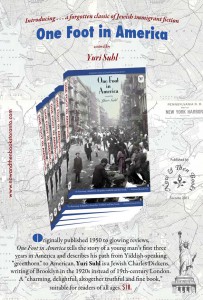 Sent as a child to study at a notable yeshiva in Warsaw, the boy soon attained a thorough grounding in the Bible, and evidently Jewish law as well. When a woman came to his father to ask whether an imperfectly salted piece of meat could still be regarded as kosher, the youngster was asked for an opinion. “Not only is the meat not kosher, but also the pot in which it was cooked is no longer kosher,” the five-year-old correctly replied.

After his ordination as a rabbi, he withdrew into the secular world and trained and found work as a textile engineer. His first published short story appeared in a Lodz newspaper on May 15, 1932, his 20th birthday; many more stories followed. He also wrote a long narrative work about two 17th-century Hamburg rabbis and the religious controversies that surrounded them, as well as an historical novel about the Jews in the time of Herod the Great. Both manuscripts were destroyed in the Warsaw Ghetto.

“I never came back to these books,” he told The Forward last year. “The thought of researching them again! I thought, ‘The Holocaust is more important.’ I felt obliged to write about the Holocaust as a witness. That’s what I told myself — I have to save my life to be a witness.”

In the Warsaw Ghetto, Elberg, who had given up his Hassidic garb, once joined a group of rabbis who were studying Talmud in a tea room. “There was a discussion of a difficult section of Gemorrah, and my father gave a very satisfactory explanation,” said son Nathan. “The rabbis were asking, ‘Who is this man who gave such an answer to this difficult Gemorrah?’ and my grandfather said, ‘This is my son.’”

Involved with the Ghetto underground and with the Jewish partisan resistance, he once found himself stranded in the woods during the snowy Chanukah season. Although he had a limited supply of matches, he fashioned a menorah from some of them and lit it. “Although it wasn’t logical and was wasteful of matches, it gave him enough of a spiritual lift that he was able to keep going,” Nathan said.

Having lost most of his immediate and extended family in the Nazi conflagration, Elberg set out in its aftermath to help as many survivors as he could. Gaining accreditation as a journalist with the American military, he was one of the earliest observers on the scene after a postwar pogrom in Kielce. He also assisted in regenerating Jewish cultural life in Lodz by establishing a writers’ union and press agency.

Moving to Paris, he edited a Yiddish magazine and contributed to numerous Yiddish newspapers. After about 18 months he went to New York, where he met and married Tehilla (Tillie) Feinerman in 1948; she died in 1956, leaving him with two small children. A few years later, he met a Shaindle Stipelman Bloomstone while in Montreal to deliver a lecture. They married and he settled in Montreal, where he lived for the rest of his life.

Under Copper Skies, a collection of Yiddish stories, was published in Buenos Aires in 1951; it was his first book in print; others followed. The Yiddish original of Ship Of The Hunted appeared in 1974; that of The Empire of Kalman the Cripple in 1983.

A gripping and realistic Holocaust novel, Ship Of The Hunted captures one family’s horrendous experiences as its various members try to survive the Nazi scourge in the Warsaw Ghetto and the Polish countryside; its final, redemptive scenes show survivors on a boat — the Exodus — bound for Palestine. The Empire of Kalman The Cripple hearkens back to the interwar period and records the colorful characters — saints, dunces, Jews, non-Jews, rabbis and petty politicians — that populated a Polish shtetl. At first presented as a scheming, ill-tempered rogue, the book’s unforgettable protagonist, Kalman, changes during the story and ultimately redeems himself.

Like other Yiddish writers of his generation, including Singer, Elberg credited Fyodor Dostoyevski as an important literary influence, and once explained that he let his characters’ inner natures determine the story rather than autocratically imposing a plotline upon them from above. Although few readers may guess it, he likely inserted a self-portrait into The Empire of Kalman The Cripple in the guise of the rabbi’s son, Berish, who leaves the religious sphere to become a secular Jew.

“In my opinion, this is very much Elberg’s life,” said Montreal Yiddish scholar Pierre Anctil, whose French translation of the novel came out in Montreal and in France in 2001. “When I brought this up with him, he smiled, so I think that this is what he meant. Knowing him and his life, this is as close as you could get to anything resembling his own life in the novel.”

For Robert Mandel, the book editor who formerly oversaw Syracuse University Press’s prestigious “library of modern Jewish literature,” receiving Elberg’s two unsolicited manuscripts remains a highlight of his career. He began reading them chiefly in order to seek a reason to reject them, he explained. “I read the entire first novel, Kalman, in one night, and I said to myself, ‘This is an amazing writer, there’s no doubt that this book has to be published.’ The fact that commercial houses had not discovered him was just shocking to me.” After reading the second manuscript, Mandel decided to publish both books simultaneously.

Despite all evidence to the contrary, Elberg remained forever optimistic about the future of his beloved mother tongue and took heart that it is being studied on many university campuses. “I don’t accept what people say that Yiddish is dead or dying,” he said last year. “Something that is dead doesn’t still grow. There are still new words being created and new books being written in Yiddish. It’s a living literature.”

He died on October 18, on the Jewish holiday of Shmini Atzeret. Predeceased in 1987 by his wife Shaindle, he is survived by daughter Eva Elberg of New York, son Nathan Elberg, stepson Gary Bloomstone, brother Shmuel Harel in Israel, and six grandchildren and five great-granchildren. ♦ 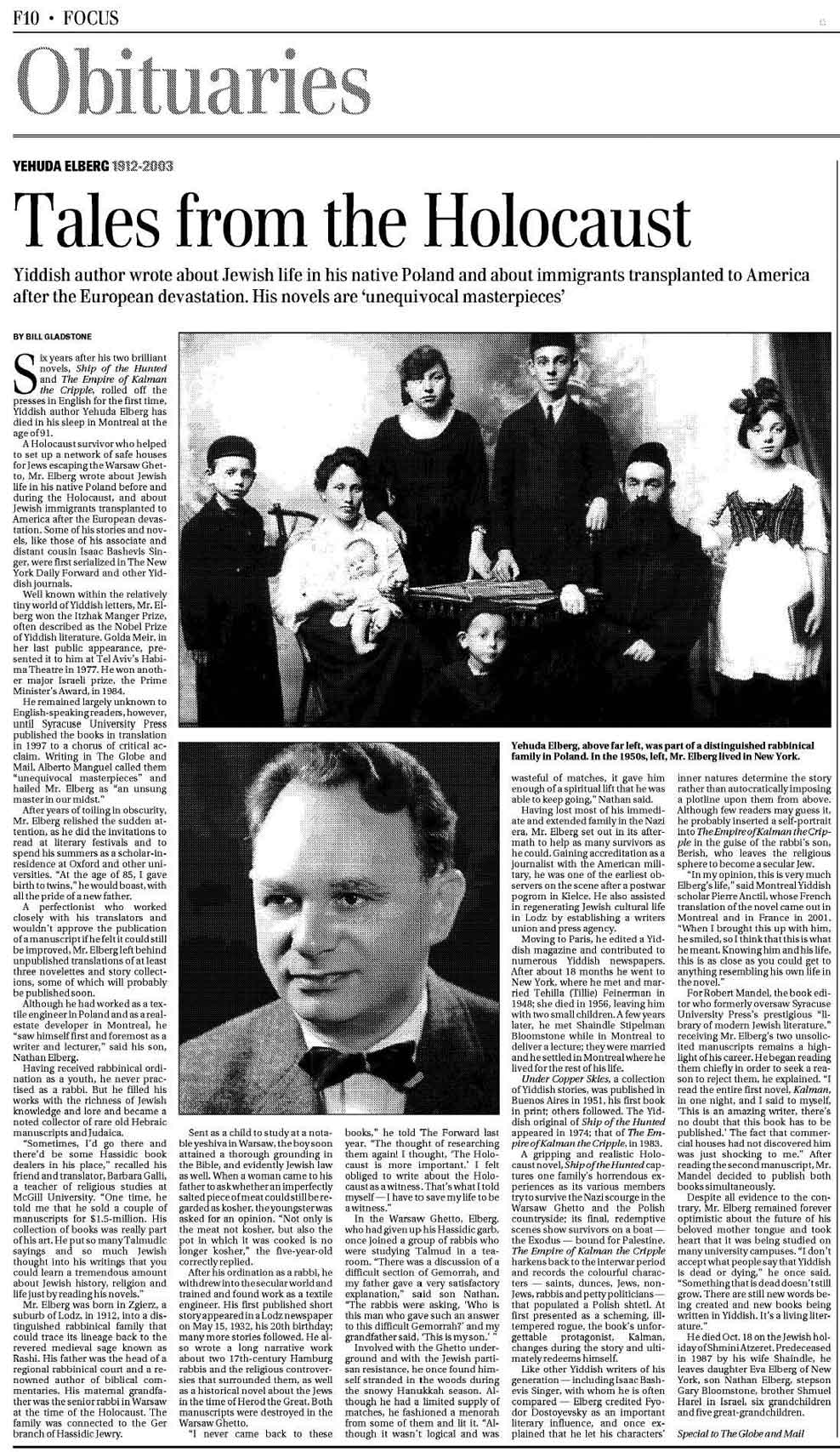