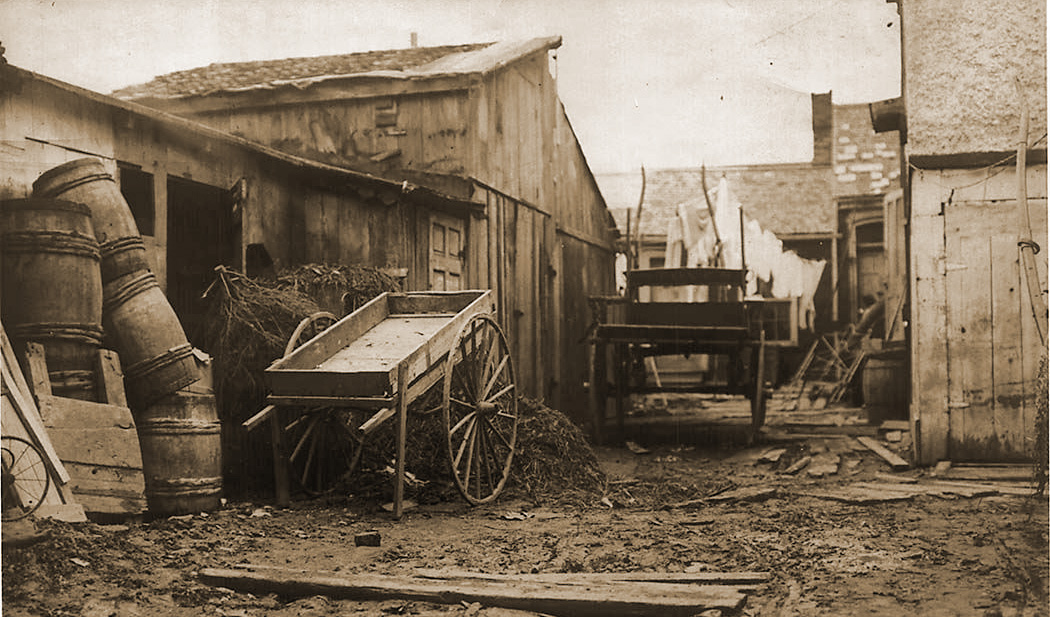 Told by Dr. Hastings, MHO, in his report on slum inspection

22 People Live in cellars; water on the floors

Dr. Hastings, Medical Health Officer, in his report to the local Board of Health, cited three things that are necessary to solve the problem connected with the slums of Toronto. The three things are:

1. a good housing bylaw, with provisions for its adequate enforcement;

The report is based upon the results of visits made by the Medical Health Officer’s inspectors to 4,693 houses in the city, which was divided into six districts. A special appropriation of $800 was voted by the Board of Control some months ago to secure the report, which contains much valuable information.

“From an economic standpoint, is it reasonable to think that the mechanic and the labouring classes can be housed to as good advantage on land of this value as on land in the suburbs which is assessed at from $1,000 to $2,000 per acre?”

Buy Up Suburban Land, Says He

Dr. Hastings, in advocating the expropriation of the area surrounding the city for about five miles, gives the following comparable table:

“The following conditions, peculiar to great cities, are found to be present to a lamentable extent,” says Dr. Hastings. “High rents are being collected for small houses, dark rooms, tenement houses, houses unfit for sanitation; inadequate water supply; impaired and filthy yards and lanes; sanitary conveniences, which, by their position or for various other reasons have become a public nuisance, a menace to public health, a danger to public morals, and an offence against public decency.”

In speaking of the visits made to slum homes by his inspectors, Dr. Hastings says:

“Some houses were so inaccessible that they were at first missed, even by experienced inspectors. One house could be reached only by a curious tunnel-like passage from the street, down a dark and precipitous stairway, and up again into a back yard. Two houses were found built over stables with no evidence of any drainage.”

Conditions in “The Ward”

He finds that the district lying between Yonge, College, and Queen streets and University avenue is the most densely populated part of Toronto. Of the 2,051 families visited in this section, 1,275 families lived in four or more rooms, 348 families in three rooms, 227 families in two rooms, 139 families in one room, 61 families in basements, and one family in a cellar; 108 of these houses were pronounced to be unfit for human habitation.

The report states that overcrowded, unsanitary lodging houses are increasing in Toronto. From ten to thirty foreign men are crowded into a small house. Each pays from 75 cents to $1.25 per week, for lodging and washing, while each earns from $1.75 to $3.50 per day.

“Their ways are not ours,” says Dr. Hastings. “Every effort must be made to familiarize our new citizens with our sanitary standards.”

He reports that there are 92 tenement houses in Toronto; 447 people in the city are living in basements, and 22 in cellars. One dwelling near Niagara street had four inches of water in the cellar; another, in the centre of the city, which rented at $20 per month, had four feet. In the cellars and back kitchens of many houses, hens, ducks and dogs are kept.

In one basement 12 people live. Some of the houses do not even keep out the cold and wet. In one the bedroom floor and a couple of inches or more of water on it. Two boards were laid down and the man and his wife got into bed without wetting their feet by walking on these boards. In one house of five rooms, five families lived. They kept two sewing machines and conducted a tailor shop.

Altogether the Medical Health Officer’s inspectors condemned 390 houses: 77 in the Eastern avenue district, 108 in the Central district, 9 in the Niagara street district, and 197 in other districts. In these condemned houses, 2,133 people are now living, amid unsanitary conditions. Forty-eight houses with dark rooms were discovered. In one of these dark room seven people slept.

There are 1,348 dwellings in Toronto without drains; 619 of these are near the City Hall. In most of these the waste and slop water is thrown into the yard. Five hundred and fifty-nine families have no water in their houses, although the rent is high enough to provide for a good supply. A row of ten houses was discovered where there was only one outside water tap for the whole ten, yet the landlord receives $960 annually in rent.

Two hundred and forty-six “rears,” or houses built on back lanes, were discovered. Some of these, being next to another house or a stable, have no access to fresh air.

“Inasmuch as there is a legal rate of interest permitted to be collected, why should anyone be permitted to charge rent which is out of all proportion to the returns?” asks Dr. Hastings, “simply because he is dealing with a foreigner who is not familiar with conditions, and who is entirely at his mercy.”

From the reports of his inspectors, Dr. Hastings estimates that 10,000,000 gallons of water is wasted daily simply because penurious landlords will not provide proper plumbing.

The Board of Health received the report, and Aldermen Graham and McCarthy were appointed representatives on a general committee which will consider it. ♦

Photos: Above, Back Yard in the Ward, 1907, courtesy City of Toronto Archives f1244_it0313. Below, mosaic of photographs from Dr. Hastings’s report. 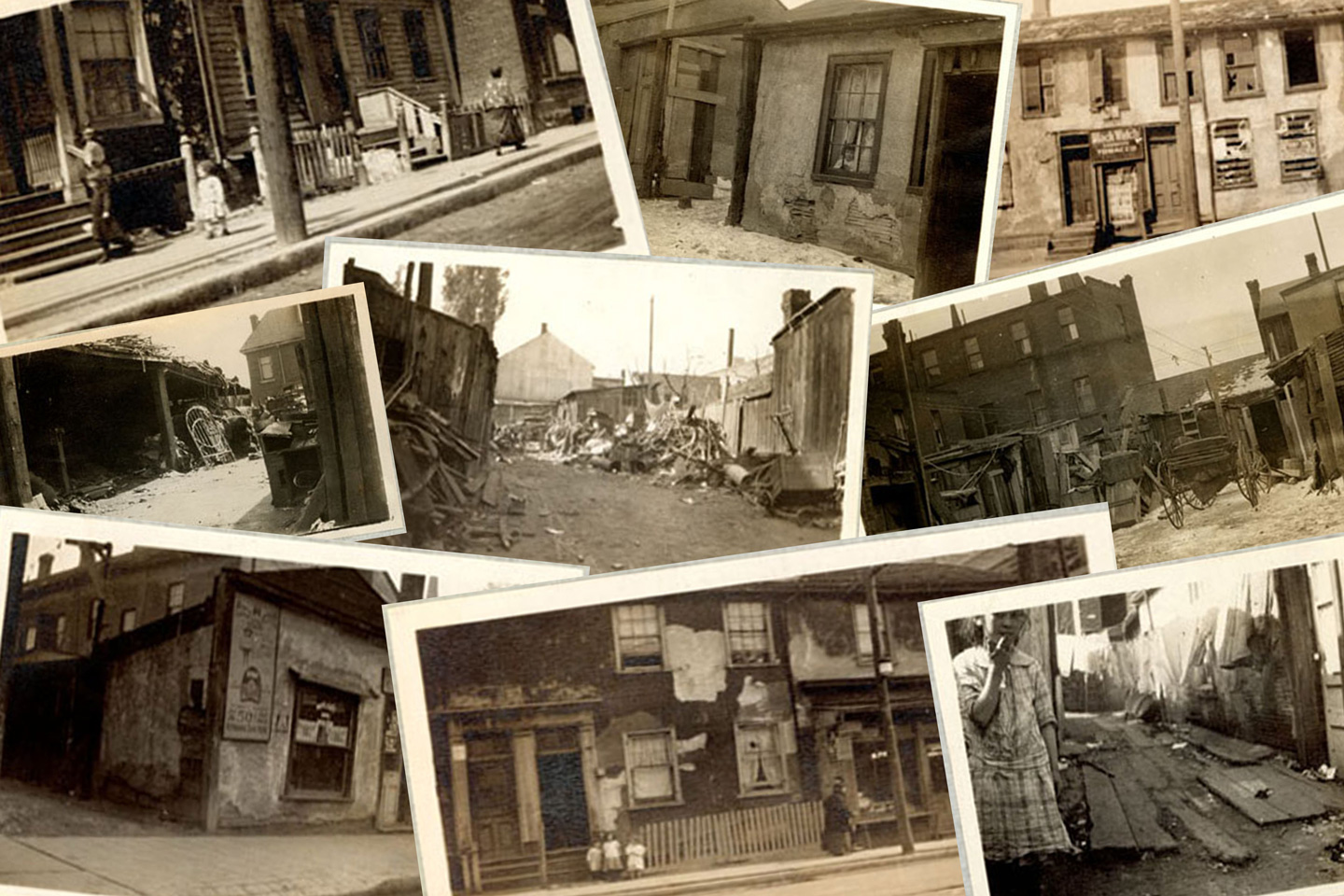