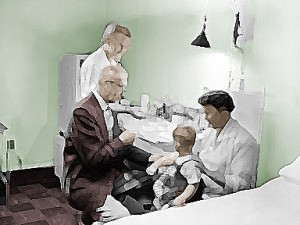 Ruth Mather, who for 44 years was secretary to Dr. Sidney Carlen, Toronto’s first Jewish cardiologist, has written a tribute to his pioneering and sensitive medical practice.

It is an unvarnished and historically accurate account of the Jewish doctors who started their practices in Toronto in the 1930s and 1940s, many of them after serving in World War II.

Mather’s book, The Doctor’s Office, A Secretary’s Memoir, (Abbeyfield Publishers, soft cover, $17.95) doesn’t avoid the rough spots along the way. It records that when Carlen first started his practice in Toronto before enlisting, he had so few patients that his brother Elmer used to sit in the waiting room when a patient was due to arrive.

Besides paying tribute to Carlen’s skills in diagnosing heart problems (there is an excellent seven-page glossary of heart disease terms), the author also writes about the human interest stories of many of his patients, including Holocaust survivors.

She tells about the shrewd but inhumane businessman who rejected a marriage broker-arranged bride from Europe as his second wife because she had had rheumatic fever and could not work.

Though the husband denied any responsibility, the woman was given free care by Carlen and looked after by Jewish social workers.

An embittered patient who suffered a major stroke never achieved a reconciliation with his son over a disputed marriage, despite Carlen’s efforts to bring the two together before it was too late.

In contrast to these sad tales, however, are the stories she tells about the patients who overcame difficulties and went on to lead healthier lives as a result of Carlen’s ministrations.

Carlen, who died in 1991 of heart disease, has two sons in medical practice in Toronto, Dr. Peter Carlen and Dr. Robert Carlen.

He emerges in the book as a devoted doctor who managed to deal with life’s vexing moments, such as the time he made house calls on a patient whose pet chihuahua attacked him more than once, even ruining a pair of his best pants. The doctor did not ask for compensation, and none was ever offered.

Mather was a young secretary at the Ontario Department of Education when she answered an ad for a typist-receptionist.

In the building at 116 College Street (now the site of the Best Institute), at the end of a long walkway from the Parliament Buildings, were the offices of Carlen, Dr. I.R. Smith, Dr. A.A. Appell, Dr. L.J. Harris, Dr. M. Rotstein, Dr. D. Borsook, Dr. D. Bohnen and Dr. L.J. Cole. Mather’s starting salary was $100 a month.

After the College Street building was demolished, Carlen moved his office to different locations, where Mather continued to work as his secretary until his death. ♦

This article originally appeared in the Canadian Jewish News in 1999 and appears here courtesy of the family of the late Ben Rose. © 2012 by the Rose family.