From The Toronto Evening Telegram, May 6 1912

Note: This article describes the surprisingly high cosmopolitan character of the Toronto Police Force of 1912. For the previous decade the city had been filling up with tens of thousands of European and other immigrants, so it only seems appropriate that some would find their way onto the Force. A closer look at the figures, however, suggests that it would take some time before Chinese, Jews, Muslims, Portuguese and various other groups would be represented on “Toronto’s finest.” ◊ 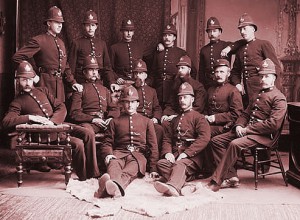 No less than eleven nationalities are represented on the police force as composed at present.

In the last police annual report the police roll shows that the Toronto police force is becoming more cosmopolitan every year. When a new man is taken on the force no difference is made as the country the applicant comes from as long as he fulfills the requirements of the police commissioners.

At the present time there are the following countries represented on the force:

In the rank of inspector the Irish head the list. There are twelve sons of Erin in that rank, compared with two Scotch and one English. Canadians are not represented in that list but they have the deputy chief to offset this.

Twenty-four Canadians are patrol sergeants, seven Irish and one English fill up the list in this rank. Of the constables, 192 are Canadians, 106 ? are English, 95 are Irish and 54 ? are Scotch. All the other countries mentioned have representatives only in the police constable class as it is only during the past few years that any but the other four nationalities have been taken on.

MARRIED MEN TWO TO ONE

The married men on the force are nearly two to one compared with the single men. At the present time there are 360 married men and 187 single officers.

All the inspectors and the deputy chief are married. There is only one bachelor sergeant, the other twenty-seven having taken unto themselves wives. The same may be said of the detective staff where thee is only one single man.

Thirty-one of the patrol sergeants have joined the benedicts and there are but two who are outside the pale. Two hundred and seventy-four of the police constables have wives while 183 are still in a state of single blessedness.

There are ten religions represented among the members of the force with the Anglicans in the lead.

The religions and the men who belong to the different churches are:

The honor of being the shortest man on the force goes to P. C. Flintoff, who stands five feet eight inches in his socks. This height is lower than the police standard calls for but Flintoff was chief of the Junction police force when annexation took place and then he was made a first-class constable on the Toronto force.

Chief Inspector Archibald is the daddy of the force. He is the oldest man on the roll and he still claims that he is good for several more years. David has seen seventy summers and winters.

The youngest men on the force are Constables Donald McMillan, J. W. Clarke and A. McMichael, who are yet in the minority, being only twenty years of age. These three men are some of the newest on the force having been sworn in during April 1912. The chief inspector on the contrary saw service first on Oct. 17, 1865. ♦

Photo shows a group of Toronto police officers from the 1890s. Courtesy Library and Archives Canada 3193878.