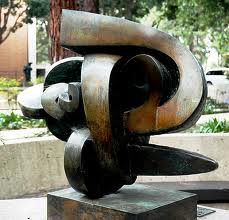 Sorel Etrog, one of Canada’s most notable sculptors, recently attended a ceremony in Reviers, a town along the Normandy coast of France, at which one of his works was unveiled to commemorate the 50th anniversary of the Canadian landing on D-Day.

The sculpture, called “Sunbird II,” is made of bronze, weighs about 900 pounds, and stands about two metres 20 cm (7 feet) high. A neatly stylized abstraction, its various elements may represent a wheel or the sun, ribs, a warrior’s helmet and parts of a bird. As the artist puts it, the sculpture seems to pulsate with the “energy of growth.”

He first cast the piece in 1963, and alternate castings are owned by the Art Gallery of Ontario, the Palm Springs Museum and other art institutions; the artist’s study resides in a museum in Basel, Switzerland. Another casting, on display in the Museum of Rodin in Paris, caught the eye of the mayor of Reviers, Serge Ozou, and other citizens of the town, and they requested it from the Canadian Embassy.

“The Canadian Embassy contacted me, and we had to make arrangements for the Museum of Rodin to release the piece,” Etrog explained. “For that to happen, we had to find a donor, which we did. The donor gave it to Canada so that Canada in turn could donate it to France.”

Besides Etrog, former Canadian defense minister Barney Danson attended the unveiling, as well as Jean Fredette, the cultural attache of the Canadian Embassy. “This work … is a permanent memory of the sacrifices accomplished by the young Canadian soldiers in the name of freedom,” said Benoit Bouchard, Canada’s ambassador to France. “This sculpture, standing beside a Canadian maple tree and only a few steps from the military cemetery of Beny-Reviers, is a symbol of peace important for all of us.”

Etrog, who was an 11-year-old child when the Russians liberated his hometown of Jassi, Romania, in 1944, said he could identify with the sense of gratitude that the townspeople expressed towards their liberators, even after half a century. “It was a very moving homage by this small town to Canada. For the people who live there, Canada will always have a very special place in their life. Every house was flying a little Canadian flag.”

Since the permanent home for the sculpture wasn’t ready in time for the June ceremony, the sculpture received only a temporary installation. Late in July, it was installed permanently at a town square, named Place du Canada, which marks the way to the cemetery where hundreds of Canadian soldiers are buried.

Etrog said he and Danson were impressed at how well the school-children of Reviers seem to know their history. As a school project, the youngsters constructed a model of the battlefield, showing the positions and movements of the troops on the first day of the Allied invasion, and where each soldier had fallen. “It was incredible,” he recalled. “Ten-year-old children were describing the entire events of that day.”

Etrog has pursued an outstanding international career. He represented Canada in the Biennale of Venice in 1966, and again at the Olympic Games in 1988 in Seoul, where his 45-foot sculpture “Power Soul” still stands. A resident of Toronto since 1959, Etrog is perhaps best known among Canadians as the creator of the Genie, the Canadian film award that was known as the Etrog for 12 years. Several Etrog sculptures are on public display in Toronto, including one outside Hart House on the campus of the University of Toronto and another outside the Sun Life Building at King and University.

Etrog leaves this month for Israel, where he intends to do some casting in a foundry in Netanya. He is planning an exhibition of drawings that pay homage to Picasso’s “Guernica” for an exhibition in Paris in 1995. ♦