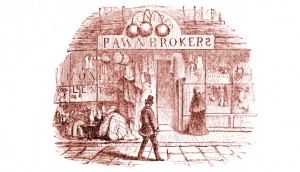 “It is a great mistake,” said a local pawnbroker, “to imagine that the pawnbroker deals only with the poverty-stricken classes. The pawnbroker in a big way of business could reveal, if he so chose, some very surprising secrets of the business he transacts with customers whom the outside world looks on as prosperous, and some of them very prosperous. I have known of one reputedly very wealthy business man here, pledging practically all his household silver for some $10,000, and many of his wife’s jewels for a still larger sum. You see, people with the reputation of being wealthy must have a certain amount of ready money, and, when the bank had advanced every nickel that it will, they have to come to us.

“Sometimes it is the professional man, forced to preserve a good front, who is driven to pawn his watch or his wife’s jewelry. Sometimes it is the needy tradesman, pressed by the bank, but yet keeping a brave face to the world, who collects all the portable property of a valuable nature which his family possesses in order to raise a little money to enable him to carry on for a while longer. Sometimes the money is needed just for pleasure. There is one young man, immaculately dressed and connected with one of the best families in the city, who, regularly every month, pawns his very valuable gold watch about the middle of the month. Then at the beginning of the next he invariably redeems it. I judge that he gets his salary or his allowance or both on the first of each month, and is flush of money for a little, and then, after a fortnight, needs some money, and so trusts his watch to us for a bit.

“But, of course, the bulk of our customers are among the poor. Last winter the articles we had offered to us told countless mute tales of the most piteous distress. Some weeks we had literally hundreds of wedding rings offered to us, and these are articles which are rarely pledged in large numbers unless in exceptionally hard times. In fact, we were so loaded up with cheap jewelry that it became almost impossible for us to advance anything at all on some kinds of it, although, in the absence of such a glut, loans would readily have been made.”

The law required the pawnbroker to keep in close touch with the police. Every morning before ten o’clock he has to report to the police on special forms, giving descriptions of all pledges received by him in pawns on the preceding business day, together with the numbers of the pawn tickets issued therefor and the amounts loaned. And the police are authorized to inspect the pawnbroker’s book at all times, and to have access to all books, papers, and pledges in the pawnbroker’s possession. “The professional thief,” the pawnbroker before-quoted said, “does not often take his swag to a pawnbroker. He is aware how closely the latter has to keep in touch with the police. But among most pawnbrokers’ secrets is the knowledge of thefts committed by amateur thieves — women as well as men — who have yielded to temptation and stolen something of which they are ignorant as to how to dispose of it in safety. On one occasion a minister’s wife, giving a false name and address, attempted to pledge a valuable ring belonging to a friend of hers, of which we had previously received notice.”

Tricks of the Trade

Many people look on the pawnbroker and his business with disgust. but the respectable pawnbroker deal honourably with his customers and, in some cases, is an actual benefactor to them. In hard times he is the banker of the poor. But the unscrupulous pawnbroker has many chances of keeping an illegitimate profit. A pledge pawned for $2 or less, if not redeemed within a year from the time of pledging, becomes the pawnbroker’s absolute property. But a pledge pawned for more than $3 continues to be redeemable, even after the expiration of year, until is is sold by public auction. And before such sale the articles pawned must be exhibited to public view and be advertised on two separate days in a public newspaper published in the city. The pawnbroker may bid for these pledges, but he is required to keep a just account of the sale, showing the day when and the money for each article was sold, which if there is any surplus on sale of an article, means to pay the same to the pawner (sic).

It is just here, in spite of all precautions as to exhibiting to public view and advertising, that an unscrupulous pawnbroker gets a chance of putting in some crooked work. For it is curious how seldom, with some pawnbrokers, the pawned article, when sold, realizes the amount of the loan and interest. The pawner inspects the account of the sale in the books, and is astonished. How did that valuable ring come to be sold for such a trifle? Sometimes the answer is that, in spite of the precautions, the actual article itself has not been sold, but another and inferior article tallying, however, with the description, has realized the small sum recorded.

If the pawnbroker only told of what his eyes see — and he will never tell but a very little of it — what a sensation he could create. For he sees the grim shadows which are thrown by the spectres of want and thriftlessness and squalor. “It is extraordinary,” The Star Weekly was told, “how often false names and addresses are given. The majority of our customers above the ranks of the really poor seem to have a perfect mania for giving false names and addresses. There is one well-known business man in Toronto, whose name is known to many, who has had frequent dealings with us, though he always appears affluent in his dress and in the style in which he lives. I know who he is perfectly well, but he invariably gives a false name and address.”

There is a very widespread idea among the general public that the pawnbroker scratches certain signs on to any piece of jewelry that is pawned with him by means of which, without the owner of the article being any the wiser, his experience of the article is passed on to his brethren in the pawn-broking business. But a well-known Toronto pawnbroker asserts that this idea in the public mind is baseless — that pawnbrokers have no common code of signs by which a previously-pawned article, and the amount for which it was pawned, can be recognized at a glance. ♦