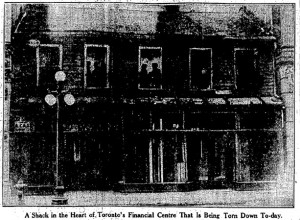 What is claimed to be the oldest building on King Street is being torn down to-day to make way at last for the march of Toronto. The Quebec Bank will build a costly modern structure on the site and another link with the days of mud roads and pristine curbs in the Queen City will have passed.

Situated on Toronto’s most dignified downtown street, almost literally buried in the “financial district,” the little frame building comprising numbers 35 and 37 King Street west has been an anomaly for a generation. Recently the contrast presented by its old-fashioned frame front has become the more marked by the upbuilding of such a neighbour as the Bank of Nova Scotia, which rears its classic proportions next door. It’s immediate neighbour to the east also towers high above this little frame relic of Muddy York and the King street skyline has long been interrupted at this point as markedly as though it was a case of a broken front tooth.

The structure dates back to 1834. Most people will remember it as jointly occupied by the Butland music store and the P.C. Allan sporting goods establishment, which was afterwards taken over by Mr. Harold A. Wilson. Erastus Wiman was an occupant of this building at a still earlier date. A view of the interior this morning shows that it has survived a bad fire at some time, the beams and joists at the back showing charred and blackened where the weather had removed the pine sheeting. The studding and joists used in those days appear to have been three inches thick instead of two as in these days of pine scarcity, and the flooring was clean, tongue and grooved pine, an inch and a half in thickness. The walls were covered with old-fashioned split laths, which consisted of thin planks split and spread wide at the cracks. They were nailed in position by the old-fashioned wrought iron nails. 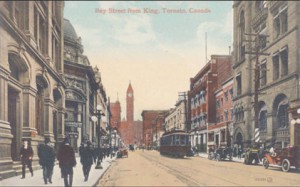 “It is undoubtedly one of the oldest buildings in Toronto,” said Mr. Geo. A. Case, the real estate agent who sold the property to the Quebec Bank. It dates back to 1834-5. It has been held in the family of Mr. Patterson, a merchant of Owen Sound for many years. Always he refused to sell. Finally, however, he capitulated nearly four and a half years ago at $126,000. “I held it until the bank bought it quite recently for $132,000. There is 35-1/2 feet frontage on the property and I got the whole strip right back to Melinda.”

Mr. Harold A. Wilson held the lease of this property good until such time as a bona fide sale was made.

“It was a ramshackle place” said Mr. Wilson. “I know its atmosphere pretty well because I was there fifteen years with P.C. Allen before I took the business over. The old part of it was all wood, the back of it had been rebuilt with bricks after the fire.” 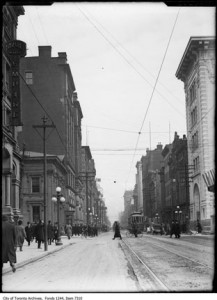 The Quebec Bank which is to occupy the site of King Street’s last expiring specimen of Little York’s architecture, will be a building of the most dignified class.

“No expense will be spared upon it,” said one of the officials this morning. “The Quebec Bank has been conservative for many years. We feel just a little too conservative. We have been here on the corner of Toronto and King since 1887 moving from the corner of Wellington next to the Bank of Toronto. We came to Toronto first, on Wellington Street further down in the 1850s.”

The Quebec Bank was founded in 1818, shortly after the founding of the Bank of Montreal, by English people living in the City of Quebec. Its purpose was to facilitate the financing of the shipbuilding and lumber industries of that date. Only one French-speaking director figures on the board, although it is said to be the general impression that the Bank of Quebec is chiefly French. The bank’s heaviest business is done in Montreal, but lately the Toronto end is assuming much increased proportions. The office has long been too small. “Since securing the new King Street site, we have had two advance offers already,” said the official. ♦