Review of Empire of Deception: From Chicago to Nova Scotia — The Incredible Story of a Master Swindler Who Seduced a City and Captivated the Nation. By Dean Jobb (Harper Avenue)

From the Canadian Jewish News, June 2015 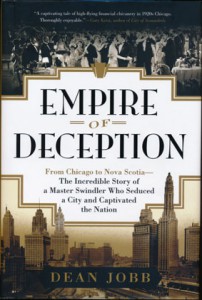 Five years ago, while researching a book on the history of the Jewish community of London, Ontario, I uncovered an obscure and remarkable personality from the past, someone who blazed a bright meteoric trail through the world and then seemingly disappeared.

Back in the 1920s, Charlie Burns (originally Bernstein) took over the local Carling brewery and ran a bootlegging operation into the United States, providing huge quanitities of booze to gangster Al Capone and others. One of London’s wealthiest residents, he rode around town in a magnificent Cadillac worth $15,000. Soon after Charles Lindbergh flew the Atlantic, Burns organized a London-to-London transatlantic flight to generate publicity for his brewery. Unfortunately the venture ended in disaster when the flight was lost at sea.

Besides building a Talmud Torah for the London Jewish community on Hill Street, he dabbled in much larger real estate ventures, including the monumental Dominion Square building in Montreal. But when the stock market crashed Burns lost everything and, overnight, the banks foreclosed all of his business interests. He left town a pauper, vanished from the public record, and died in obscurity.

Some years ago, Canadian author Dean Jobb stumbled upon a much more accomplished meteoric figure whose criminal light also blazed brightly in the 1920s. With his impeccable suits and round horn-rimmed glasses, Leo Koritz had the look of a trustworthy accountant or financial advisor. An immigrant from Bohemia, he grew up in the midst of Chicago’s Jewish community, became a lawyer, and began accepting investments from clients for mortgages that seemed to pay better-than-average yields.

From the start, Koretz had no trouble making people believe in him. After his first “dip into dishonesty” in 1905, he felt compelled to keep selling fraudulent mortgages in order to pay dividends on the previous fake transactions. Then, upping his game, he acquired some rice farms in Arkansas and began selling shares to a series of non-existent properties. Would-be investors, assured by his track record that the rice farms would be profitable, beat a path to his door. 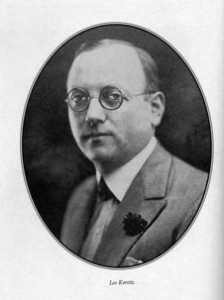 With each transaction, Koretz put himself deeper and deeper into the hole, and soon realized he could not turn back from the “empire of deception” he was building. “You understand how it goes,” he would eventually admit. “One false step leads to another, until it is impossible to turn back. You must go on or face exposure.”

Perhaps part of Koretz’s criminal genius, and the reason why he eventually became the subject of this very readable and fascinating book, is that he kept expanding his operation. After Koretz bought shares in a Panamanian enterprise that sold wooden railway ties to an American railroad, he traveled to the Bayano region of Panama and found out that he had been swindled. “There was no timber, just a few quaqmires and mudholes — worthless stuff,” he would recall. “And no $10,000.” Determined to turn the bitter experience to advantage, he decided to improve on the swindle and bring it to Chicago.

With time, Koretz became extremely adept at how to make suckers fall. He invented a syndicate of powerful businessmen who were behind the Panamanian enterprise, making them sound so real that even his closest friends were intrigued. At first he let in only a few investors, making sure to reward them with impressively high dividends; soon people were clamouring for the stock. He frequently advised would-be investors to delay and even declined large cheques on occasion. “When Leo did sell stock, it was always with a feigned reluctance that convinced buyers that he had done them a favor,” Jobb writes.

To anyone who got cold feet or wanted their money back, Koretz always obliged, writing a cheque on the spot, which served only to enhance demand for the stock as well as his reputation for integrity. People literally camped outside his door for the privilege of putting their money into what they were sure was a rock-solid and highly profitable enterprise.

Perpetually needing to enlarge the Ponzi-like pyramid he was building, Koretz next declared that oil had been discovered on his Bayano properties, igniting a new frenzy of interest. The bubble reached its height in 1922, about the time a group of investors feted Koretz at a posh banquet in Chicago’s Drake Hotel.

His downfall came when a group of his executives finally visited Panama, where, to their immense shock, they discovered alligator swamps instead of oil fields. By then Koretz had liquidated much of his holdings, left packets of cash and jewelry for his unsuspecting wife and family members, and vanished. This dramatic denouement brings brings us only to the end of the first of the book’s three parts; the other two parts cover his time in hiding in Nova Scotia and the twists and turns involving his eventual trial and imprisonment.

A Bernard Madoff of his day, Koretz was a despicable character who brought many good people to ruin, but whose story nonetheless makes for compelling reading. Empire of Deception captures the spirit of the high-flying 1920s and the cops-and-robbers wildness of Chicago at that time. Because the setting is Chicago, and the chapters alternate between criminal and prosecutors, the book reminds me of Eric Larsen’s extraordinary true-crime account of the demonic serial killer H. H. Holmes in The Devil in The White City.

I am also reminded of Ben Macintyre’s 1997 book The Napoleon of Crime, a fascinating biography of 19th-century American-Jewish arch-criminal Adam Worth. For better or for worse, Worth arguably made an even bigger mark in the world than either Madoff or Koretz. As Sir Arthur Conan Doyle once acknowledged, Worth had been the prototype for Sherlock Holmes’s criminal adversary, Professor Moriarty. It’s odd how, ever since Daniel Defoe and Edgar Allen Poe, universally reviled criminal behaviour has become the basis for one of the most popular and enduring genres in literature.

Speaking of true-crime biographies, Monda Halpern, an associate professor of history at Western University in London, Ontario, has written an in-depth account of the 1931 murder of Ottawa resident Jack Horwitz who had been having an affair with a married woman, Alice Edelson. Through a detailed examination of newspaper coverage, interviews with family and community members, and archival photographs, Alice in Shandehland reconstructs this long-forgotten murder case in Depression-era Canada. (“Shandeh,” of course, is the Yiddish word for “shame” or “disgrace.”) The book is newly published by McGill-Queen’s University Press. ♦