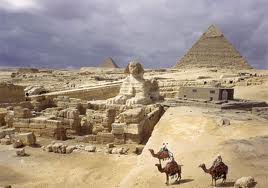 Note: Written in the height of the Mubarak years, long before his overthrow during the so-called Arab Spring of 2011.

Bartering is a way of life in this bustling, dirty, exotic city of 15 million people. From the moment you arrive, you will be beseeched and cajoled to buy perfume, eat a shishkebab, hire a taxi, or purchase an antique papyrus of dubious provenance. You cannot walk far without someone saying, “Hello — are you American?” and perhaps walking alongside you, asking, “Where are you staying? At the Semiramis? Nile Hilton?” and “What would you like to buy?”

The streets are overgrown donkey paths, ill-equipped for the motor traffic that now clogs them. Few intersections have traffic lights. Cars honk continuously. Not even the white-uniformed traffic police can tame the disorderly stream of vehicles that includes donkey carts, horse-drawn buggies, even pickup trucks loaded with livestock.

The sights, smells and sounds are overwhelming. Here, a man is polishing a car; a boy is beating a donkey; three men in caftans are sitting at a cafe, drinking Turkish coffee and smoking a hookah; a girl, barefoot and in rags, plays with a dog; a veiled woman reclines on a pile of straw. The nostrils are filled with incense, dung, perfume, smog, fresh-baked bread, dust from the desert. The calls of children, muezzins and wild geese reverberate. 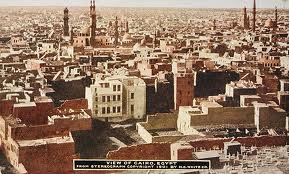 In a bazaar by the Nile, street after narrow street is filled with a diverse assortment of apothecaries, bakeries, cafes, furniture makers, rug weavers and merchants of aluminum kitchen utensils, colourful fabrics, cassette tapes, leatherbound Korans. Behind pushcart and scales, an elderly woman takes the hen she has been weighing, sips some water, and bites the live chicken mortally through the neck.

Enroute, by foot, to the Egyptian Museum: “Hello, mister, you need a taxi? I take you all around Cairo — the pyramids, the Citadel Mosque, Old Cairo, the old synagogue, the old Coptic church. Everything.”

“No thank you. I’m just going to the museum.”

“Ah, well then, perhaps later? I will wait for you.”

“No thank you. That won’t be necessary. Salaam al komen.” 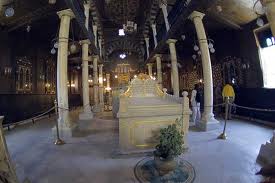 The Egyptian Museum is a wonderful 19th-century building of classical proportions with a massive collection of sarcophagi, mummies, obelisks, statues and other relics of ancient dynasties. After two hours, my usual limit, I emerge into the daylight, wondering what to do next.

“Hello, mister! I wait for you! Now I take you to pyramids, okay?”

“No thank you. I’ve already seen them.”

“To the Citadel Mosque and Old Cairo I will take you. I show you everything. You will be very happy or you give me nothing. Okay?”

The negotiation for the two-hour hire starts near $50 US, which we both agree is a ridiculous figure, and ends at about 20 Egyptian pounds, or about $10 — “plus baksheesh.”

Our first stop is the Citadel Mosque of Mohammed Ali, a spectacular piece of architecture with a commanding view of the whole megalopolis, including the Sphinx and the three pyramids on the desert’s edge. 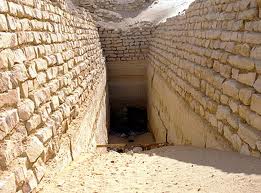 To reach the 800-year-old Ben Ezra synagogue involves passing through Old Cairo, where the squalor is overwhelming. The roads are no more than dirt tracks, the houses stone hovels with corrugated iron rooves. From the taxi, one peers into the City of the Dead, a centuries-old cemetery whose tombs double as residences for the poor.

“Mister, are you Jewish?”

The venerable old synagogue is plain, dusty, under constant repair. For centuries, its attic genizah was the burial place for more than a hundred thousand discarded Hebrew texts, letters and other documents. The genizah, rediscovered in the 19th century, has yielded a wealth of knowledge. (Prominent in medieval times when Maimonides lived here, Cairo’s Jewish community has all but disappeared.)

My first visit to the pyramids had been at night: like the views, the sound and light show had been disappointing. So on my last full day in Cairo, I return to the pyramids. Now the taxi rolls right up to them in daylight and their grandeur becomes at once apparent. Then we go further into the desert and look back at them with the sprawling, smoggy city as a backdrop. 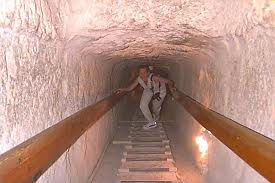 For three Egyptian pounds I buy entry into a pyramid. An old man leads me, crouching and backwards, down a narrow sloping tunnel deep into the monument’s heart. Eventually we enter a chamber with a stone sarcophagi inside and flecks of ancient paint on the wall. Back in the Egyptian air, I give my self-appointed guide the expected baksheesh and buy my waiting driver a Turkish coffee at a cafe beside the quixotic Sphinx.

Although many of Egypt’s famous monuments were ancient even in the days of Jacob, the Biblical patriarch, some historians conjecture that Jewish slaves helped construct them. It’s a fertile irony that we who were once slaves in Egypt may now return as tourists, dispensing baksheesh as we go. ♦