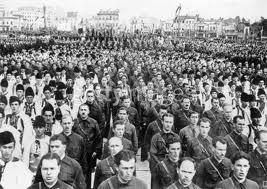 “Look at Judah’s claws, deeply penetrating my body! Look how my blood is running, look how the Jews are drinking it!”

These are lyrics to a song. They were excerpted from a songbook found at Romanian Camp, a 50-acre compound in Flamborough, Ontario, outside Hamilton, where a group of sympathizers of the Iron Guard — an extreme right-wing, anti-Semitic religious order responsible for much Jewish bloodshed in Romania of the 1930s and 1940s — has been quietly passing down the torch of racial hatred and brutality to a new generation of adherents in Canada.

Over several decades, a cadre of transplanted Iron Guardists and their followers have reportedly used beatings, firebombs and threats to attempt to coerce members of the Romanian community in southern Ontario to accept their explosive blend of Christian mysticism, Romanian nationalism, anti-communism and fascism. Toronto police suspect Iron Guard involvement in the unsolved murder of a Romanian writer, Cornelius Dima-Dragan, in 1986.

The Iron Guard, also known as the Legion of the Archangel Michael, emerged as a powerful political force in Romania in the late 1930s. Sympathetic both to Hitler’s Nazis and Mussolini’s fascists, green-shirted “legionnaires” marched in priest-led processions, conducted numerous political murders and pogroms, seized property from Jews, and undertook a five-month reign of terror after joining the government in 1940. Following the Guards’ overthrow in 1941, many of its proponents found protection with the Nazis.

As Canadian Justice Jules Deschenes noted in a landmark 1987 report on war criminals in Canada, at least 15 former Iron Guardists have made southern Ontario their home, having slipped into Canada during a period of relatively lax immigration checks in the immediate post-war era. It is estimated that some 500 one-time legionnaires are living in North America.

Like other officials in the Canadian Jewish establishment, Sol Littman has long known of the Hamilton-based Romanian Cultural Association, allegedly an Iron Guard front organization, and its Flamborough camp where, according to an inside source, anti-semitic tales have been told and anti-semitic songs sung. As director of the Canadian Simon Wiesenthal Centre, he is well-versed in the brutal and frightening history of the order. “The Iron Guard was the most vicious, dangerous, conspiratorial fascist terrorist group in Europe,” he told the Forward. “It assassinated cabinet ministers, liberal professors, police chiefs, almost anyone that displeased it. And it conducted the most horrendous massacres of Jews in both Bucharest and Jassi.” 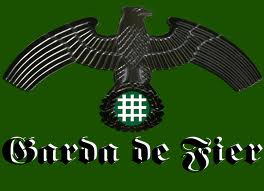 It has been more than a decade since Simon Wiesenthal personally notified Canada’s justice department that former Iron Guardists in Toronto, Hamilton and Windsor were working to rehabilitate their organization. Today, Mr. Littman and the Centre are still keeping a nervous eye on such pillars of the movement as George Balasu, the 71-year-old founder and director of the Romanian Cultural Association and publisher of Cuvantal Romanesc (“The Romanian Voice”), a pro-legionnaire newspaper.

In 1990, Mr. Balasu and two fellow travellers from Toronto visited post-revolutionary Romania, were detained by Romanian security officers, and were summarily expelled for distributing Iron Guard material. Six years after the downfall of the Ceaucescus, Romania is reportedly aswirl with some 150 political parties, factions and movements, many of them right-wing and anti-semitic. While the Iron Guard has been outlawed, legionnaires are still said to propagandize relentlessly and to operate camps for young people in the mountains.

“In North America, the Iron Guard is more dangerous than Holocaust deniers like Ernst Zundel or neo-Nazi skinheads, who are more visible and who, generally speaking, can’t raise more than a corporal’s guard in terms of membership,” Mr. Littman said. “By contrast, they (legionnaires) are experienced conspirators, they have international connections, they have large amounts of money, and they operate in a foreign language which is not readily accessible to most people and to most police groups. They are a most peculiar blend of Christian religiosity, brutality — and intellectuality, because in their ranks are included a surprising number of university professors, both in North America and Europe. This makes them much more dangerous than most of the redneck Nazi groups.”

After Mr. Littman offered to share the Centre’s files with the Hamilton Spectator, that southern Ontario daily undertook a lengthy investigation which culminated recently with a series of articles that exposed the local cell of Guardists. The Spectator detailed links between the current Iron Guard movement and the Romanian Cultural Association, outlined the campaign of intimidation and terror that has been waged for decades against other local Romanian Orthodox parishes, and recounted the brutal and frightening history of the Iron Guard in Romania.

As well, it revealed that the federal and provincial governments gave about $140,000 in multicultural grants to the association in 1986 and that both levels of government continue to support Cuvantal Romanesc, the association’s Romanian-language paper, through paid advertisements. “They’ve been able to exploit the theme of multiculturalism to get grants from the government,” observed Mr. Littman.

Moshe Renan, chair of the Ontario region of the Canadian Jewish Congress, reacted swiftly to these revelations by urging federal and provincial authorities to investigate the association’s apparent breach of federal anti-hate laws and to withhold any further funding, whether from grants or ad revenues, pending the outcome of such an investigation. “In this country and in the United States, the Iron Guard has been one of the most secretive and violent groups around,” said Bernie Farber, national director of community relations for Congress.

B’nai Brith Canada also issued a statement deploring Iron Guard activity in Canada. In an interview with the Forward, B’nai Brith’s David Cooper cautioned that government bureaucrats who purchase ads in ethnic newspapers should not be faulted for failing to recognize the true nature of the association’s newspaper. “It’s not readily apparent that it’s an anti-Semitic or fascist newspaper,” he said.

“They’re too sophisticated, they’re too subtle. Rather than use overt anti-Semitic language, they’ll talk about bankers, and use those code words that neo-Nazis and anti-Semites use.”

To all appearances, the Romanian camp in Flamborough, with its numerous cabins, dining hall, small chapel and proud statues of communal heroes, resembles any ethnic community’s summer camp. It was established nearly 30 years ago by Mr. Balasu and other recalcitrant legionnaires after losing a pitched battle for control of a local Romanian church and its flock. A statue at the compound honors Viorel Trifa, a leading Guardist who helped to incite an obscenely brutal pogrom against the Jewish community of Bucharest in January 1941.

At that time, Trifa made an inflammatory anti-semitic speech at a mass political rally. It was followed by three days of wide-scale riots in which Jewish shops were looted, synagogues desecrated and burned, and scores of Jews taken into the forests and shot. According to American diplomatic and other news reports, some Jews were taken to an abbattoir and slaughtered, and their bodies hung on butcher hooks with signs saying “kosher meat.” In all, the pogrom claimed more than 120 Jewish lives.

Later, Trifa emigrated to the United States where, as head of the Detroit-based Romanian Orthodox Episcopate in America, he sought to export Iron Guard ideology to Romanian Orthodox parishes across the continent. “Trifa was the archbishop who led the charge that helped the Iron Guard take over the North American churches and build them into a very strong instrument,” said Mr. Littman. One of numerous old-time Iron Guardists who have visited the Romanian Camp in Flamborough, Trifa was always well-received when he spoke there. Eventually forced to flee the United States after being stripped of his U.S. citizenship, he died abroad in 1987.

“We prosecuted Trifa many years ago, and we have other Iron Guard members currently under investigation,” according to Eli Rosenbaum, director of the Office of Special Investigations in the United States Justice Department. “There’s nothing more I can say about that at this moment. We have over 300 people under investigation right now, and a number of them are Iron Guard cases.”

However, Rosenbaum acknowledged that legionnaires have been active in the Detroit-Windsor area. “It’s sad and somewhat frightening that people would associate themselves with a movement that was responsible for so much bloodshed and inhumane conduct during the war,” he said.

By whitewashing its image and history, the movement has found a way to survive underground and attract new followers, according to Dr. Aurel Braun, professor of political science at the University of Toronto.

“If it was just those who came here in the 1940s, it would be a very small number of elderly people who would be reprehensible in their ideals, and possibly engaging in activities that violate our hate laws, but they would be dying out because of old age,” he said. “Instead, the Iron Guard immigrants have put down roots and created organizations that have apparently managed to pass down the tradition of hatred to a younger generation.

“This makes them not only reprehensible,” he continued, “but also very dangerous.” ♦